Virtual Reality Is Going to Change the Way You Watch the Masters — And the Way I Cover It! 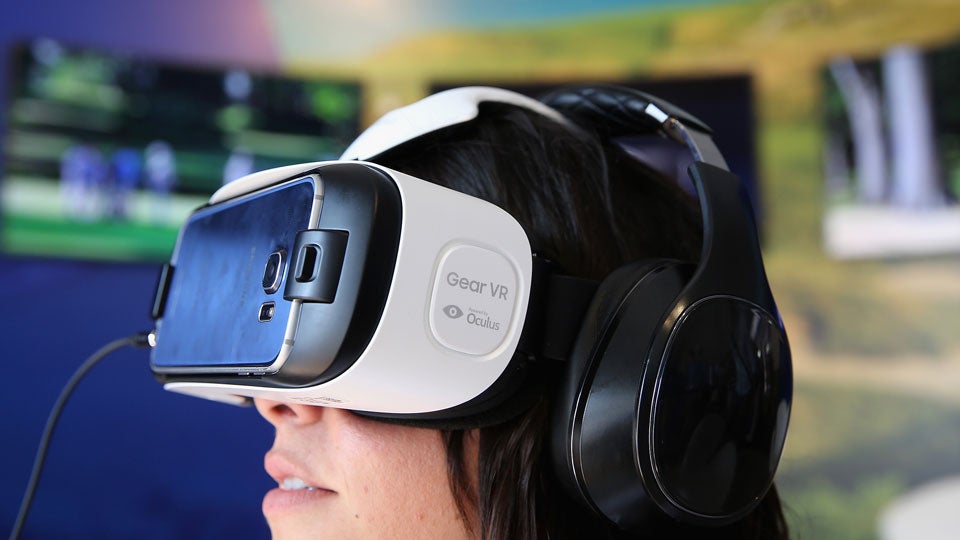 “This is my last Masters,” I told my pressroom neighbor during the first round at Augusta National on Thursday.

He didn’t look up from his laptop. “What, you’re retiring?”

I had just returned from Augusta National’s sixth green — or, rather, its virtual-reality Doppelgänger in the ground-floor interview room of the Masters press building. Technically, I attended a demonstration of VR software developed by NEXT VR, a company based in Laguna Beach, Calif. sure to make ticket scalpers everywhere miserable. Less technically, I partook in a mind-blowing, are-you-kidding-me, WTF exhibition of a live-streaming technology that is about to change your life.

(Disclaimer: I have no connection to NEXT VR, Google, Facebook, Samsung, Oculus, or anybody else making real money from ones and zeroes.)

Anyway, I strapped a pair of VR goggles to my noggin, and whoa, I was on the right side of the green on the par-3 sixth, the hole known as “Juniper.” Looking left, I saw hundreds of spectators seated on a grassy hillside and, above them, the hilltop tee. Looking right, my eyes traced the ten-deep gallery around the green until I was staring down at the fellow seated next to me. He was holding a pairings sheet, which I tried to read.

“Basically, we’re live streaming this to your phone,” said Bradford Allen, NEXT VR’s executive chairman. (Actually, his engineers were live-streaming the scene to his phone. The company’s software currently works only on Android devices, frustrating iPhone users like myself. The phone fits into a slot in the goggles, which magnify the image on the phone’s screen.) “We have two stereoscopic cameras on holes six and sixteen,” Allen continued. “They give you a sense of presence, so you feel like you’re actually sitting there.”

Or hovering. I looked down and gasped. I had no feet!

Mr. Allen, if you’re unclear on the point, stood next to me in the press building, making sure I didn’t tumble over a chair. I was really out there on No. 6, puzzled only by the lack of tactile and aromatic stimulation. Through the phone’s speaker I heard a little “thump” as a ball hit the green. There was a ripple of applause, perfectly synched to my view of clapping spectators. “Ooooooo!” I said, like any other patron.

Actually, my reaction was comparatively subdued. Putting on the goggles, a coat-and-tie reporter for a local TV station glanced up, down and sideways like a cat following the flight of a bee. “This is the coolest thing I have ever seen!” he said. “I don’t want to take it off.” And then, “Is this what’s happening on that hole now?”

I’m not a tech writer, but I’ll hand out grades. The headset’s 3-D perspective is totally natural, so it gets a 10. The colors are perfect, too; I’ve got three decades experience at Augusta National, so I know my hues — another 10. Definition, however, is not quite there; I judged my panoramic image to be a tad grainy, although well short of pixillated. “The resolution isn’t high-definition yet,” Allen explained, “but by the end of the year it will be 4K” — i.e., very sharp. He predicted, as well, that Christmas 2016 will see lightweight, Maui Jim-style wraparound VR glasses under the tree. “This,” he said, grasping one of his headsets, “is like the brick cell phone.”

Asked if virtual-reality programming spells doom for conventional television, Allen shook his head. CBS, with its gazillion cameras, can go anywhere, and the new technology adds nothing to TV’s storytelling capabilities. “What VR does is take you there. It puts you in seats you could never pay for. It’s just an incredible experience.”

And not just a golf experience. NEXT VR has tested its software at NBA, NFL, NHL and Premier League venues — but not in a NASCAR racer because, as Allen conceded, stereoscopic cameras in motion create “the sensation that someone is shaking your head.”

Allen shrugged. “Mark Zuckerberg thinks this is the next platform.”

The headsets cost $99, unless you purchase a Samsung Galaxy S7, in which case they’re free. You should also be aware of potential conflicts with fitness apps. It took me only 58 steps, for example, to walk to the VR version of Augusta’s sixth hole, burning far fewer calories than if I’d trudged the hilly half mile to the real No. 6. If I’d been home, I wouldn’t have had to leave my couch.

But I’m nitpicking. Next year I’ll be covering the Masters from the aforementioned sofa, and the guy at the next laptop will have to needle and distract me via Skype. That’s assuming, of course, that somebody develops the appropriate VR software for my iPhone.

I’m not giving up my iPhone. Only my press pass.