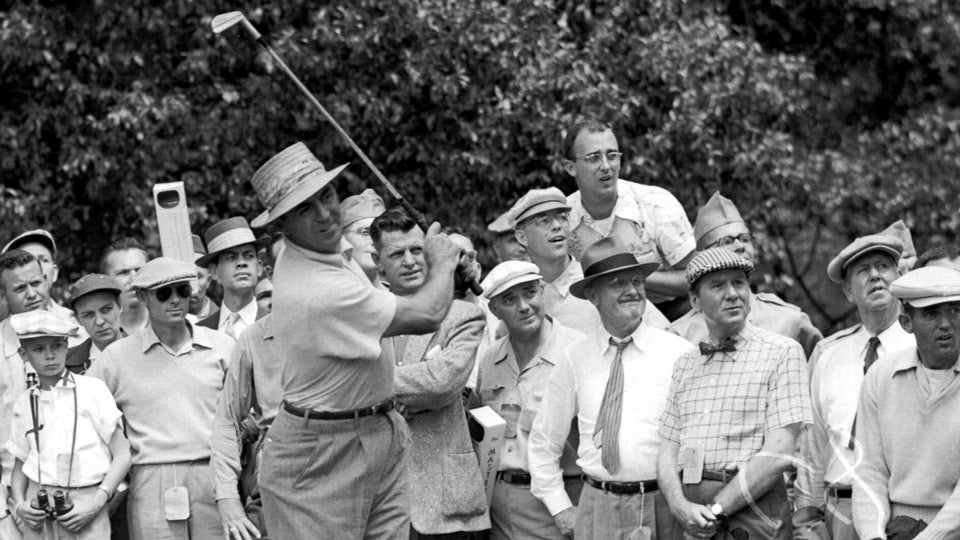 Sam Snead (left) demonstrates his fitness to Spain's Severiano Ballesteros during the 1979 Ryder Cup at The Greenbrier.
Phil Sheldon/Popperfoto/Getty Images

Curtis Strange and Lanny Wadkins are two titanic talents who were born and raised in Virginia. For lasting greatness, though, Snead gives each of them two a side. Born in Ashwood, near Hot Springs, Slammin’ Sam developed one of the most natural, powerful swings in history. He caddied at the Homestead resort and eventually signed on as an assistant pro. Within a few years, Snead switched allegiances, joining the rival Greenbrier resort just across the border in West Virginia, but he kept affiliations with both properties for the rest of this life. He won an astonishing 17 West Virginia Opens. Also remarkable are his gold-standard 82 PGA Tour wins, including seven majors, as well as his age records and longevity marks. He was the first, and still the youngest, to match and then break his age at a PGA Tour event, with his 67 at age 67 at the 1979 Quad Cities — followed by a 66. He won eight Greensboro events spanning 1938 to ’65. At 62, he finished T-3 at the PGA Championship, trailing only Lee Trevino and Jack Nicklaus. There were many great players and personalities on the PGA Tour over the past 90 years. There was only one Sam Snead.