Vaughn Taylor Goes from Alternate to Winner’s Circle at Pebble 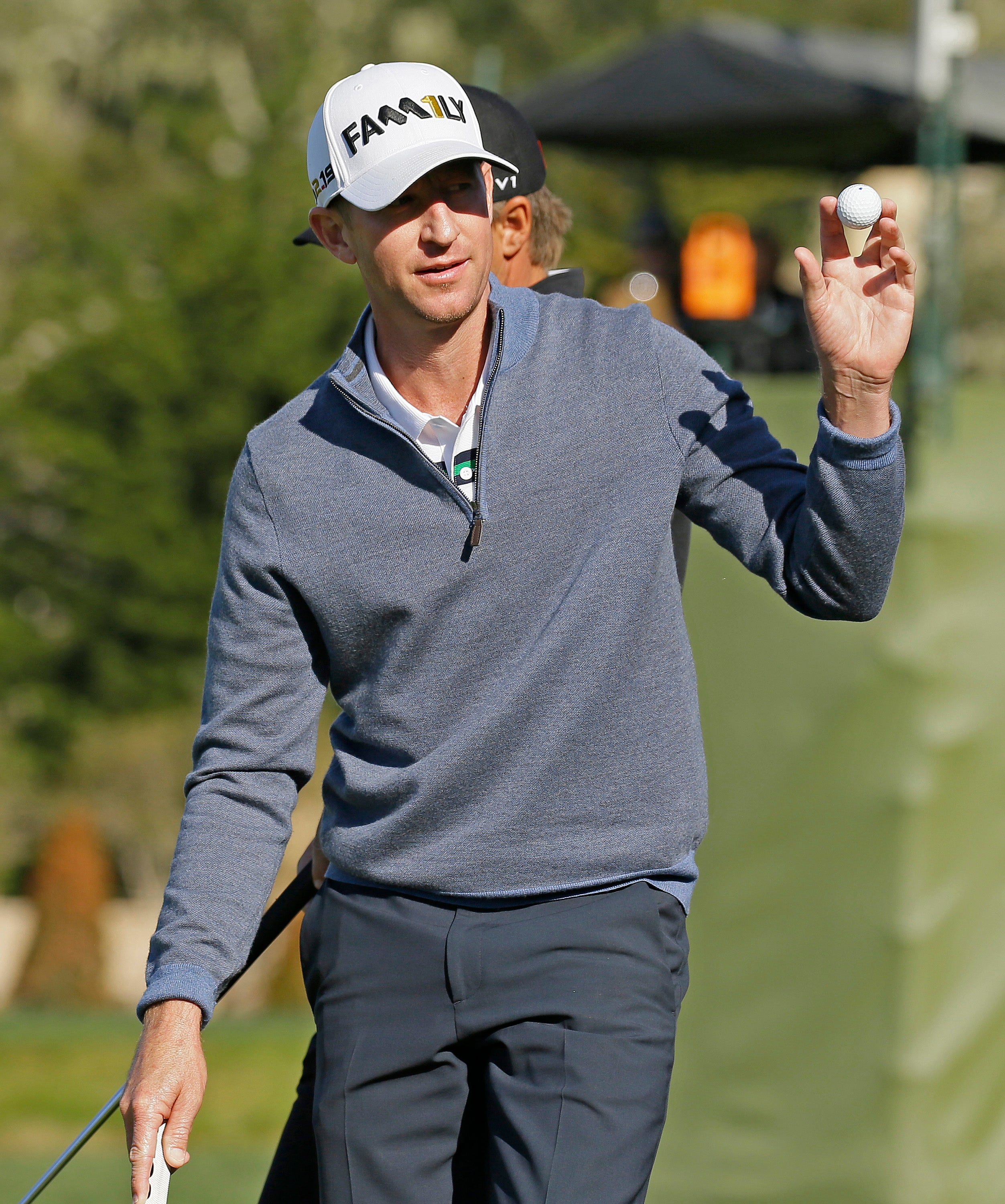 Vaughn Taylor holds up his ball after making a birdie putt on the second green of the Pebble Beach Golf Links during the final round of the AT&T Pebble Beach National Pro-Am golf tournament Sunday, Feb. 14, 2016, in Pebble Beach, Calif. (AP Photo/Eric
AP Photo/Eric Risberg

PEBBLE BEACH, Calif. — Phil Mickelson needed a win. That was one of the bigger narratives coming into this AT&T Pebble Beach Pro-Am. Lefty hadn’t hoisted a trophy since the 2013 British Open. At 45, he had dropped out of the top 10, and top 20, and was barely in the top 30 (29). He had left tried-and-true swing coach Butch Harmon for the relatively unheralded Australian Andrew Getson.

Then along came Vaughn Taylor, a gangly 39-year-old who was ranked 447th in the world, who hadn’t won in over 10 years, and whose usual AT&T Pebble Beach Pro-Am partner, Toms shoes founder Blake Mycoskie, was forced to find a new pro when Taylor lost his Tour card. (Taylor and amateur Gregg Ontiveros, who met last Tuesday, won the team event.)

“Just absolutely amazing,” said Taylor, whose eyes welled with tears more than once as he met the media after his final-round 65, which was just enough to nip Mickelson (72) by a shot and Jonas Blixt (69) by two.

Mickelson had a chance to force a sudden-death playoff, but missed a five-foot birdie putt on 18. Jim (Bones) MacKay, his caddie, came out of the scoring trailer and gave Taylor a hug. Mickelson came out afterward and went out of his way to shake Taylor’s hand as the winner did an interview.

“I can’t believe I’m actually sitting here right now,” Taylor said from the pressroom. “Didn’t know if it would ever happen again, to be honest. Just lost a lot of confidence, lost a good bit of my game.”

The fact that Taylor was even in the field at Pebble was something of a surprise. He is so light on sponsors these days his caddie totes his clubs around in a lightweight carry bag. (That has its plus side, Taylor says: He avoids excess-baggage fees.) He is playing the Web.com Tour this season.

What’s more, Taylor came down with such a bad case of stomach flu in Colombia last week he withdrew from the tournament. He considered flying home to Augusta, Ga., to rest, but instead came straight to Monterey because it was cheaper. When he got here, he was first alternate, but he got in when Carl Pettersson withdrew. A revived, relieved Taylor was in.

“I just wanted to finish top 10,” Taylor said of his goal at Pebble, where he began the day six shots behind leader Mickelson. “Just wanted a place to play next week. I was going to drive up [to Los Angeles, site of this week’s Northern Trust Open] to Monday qualify. So I just wanted to take my time and finish top 10 and not have to worry about the qualifier.”

Instead, Taylor birdied four holes in a row on the back nine, the last coming when he buried a tricky, left-to-right putt at the par-4 16th hole. He ran around the green pumping his fists, and later called it the best putt of his life. His former amateur partner Mycoskie, who was in Taylor’s wedding, was running around celebrating, as well. So were Taylor’s wife, Leot, his toddler son Lachlan, and his current amateur partner, Ontiveros.

“I played terrible,” said Ontiveros, the winning amateur here. “I picked up on probably 60 percent of the holes. But he was striking it so well, and for the last three days he putted beautifully. It was fun to watch.”

“I was really worried about my career,” Taylor said afterward.

Two years ago, when his fishing boat capsized on the Savannah River, dumping Taylor into fast-moving rapids without a life vest, he was worried for his life. He managed to swim to shore, and a park ranger helped him from there. Leot now says he was a mess when he called to say he was safe. Vaughn says the episode made him realize that not everything is about him, that Leot and Locklyn need him, and that he needed to make better decisions.

“That beautiful lady right there,” he said, pointing to Leot when asked what kept him going in his darkest hours. Maybe it was Valentine’s Day, or the fact that Taylor had just won $1.26 million, but his eyes welled with tears. “She’s been my rock,” he added. “She’s the one that keeps me going, and we’re lucky enough to have that little guy with us, too. It’s all for them.”

Before Pebble Beach, Taylor’s athletic claim to fame was his two Tour wins at the Reno-Tahoe Open (2004-’05). He also once caught a 56-pound striped bass.

Now he’s going to the Masters.