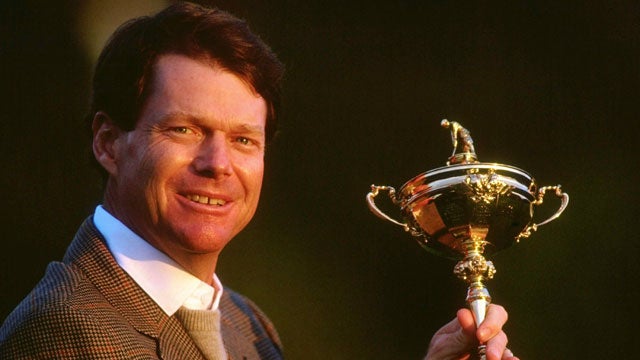 NAPA, Calif.—This week’s Van Cynical Mailbag comes to you from The Left Coast as the new PGA Tour season tees off this week at the Frys.com Open.

What did you do during the offseason and, what’s in your wallet?

Let’s forget all the pre-Europe American teams. Those guys were great players but they built up records against weaker competition. For post-Europe, I’d take Lanny Wadkins, Fred Couples, Payne Stewart, Paul Azinger, Raymond Floyd, Tom Watson, Tom Kite and the pre-1992 Curtis Strange. Larry Nelson overlaps the GB&I and Europe eras, but he was 9-3-1 in three Cups so he’d be hard to pass up. That’s a pretty good base. I don’t need the other three guys because which of those nine guys would you tell to sit down?

Van Cabernet, What’s your take on Babbles Chamblee’s comments on Phil and Tiger not being fit future Ryder Cup captains?—Klaugh56 via Twitter

I get Chamblee’s message loud and clear. He says that since Tiger and Phil never fully invested in being on the team—Phil by sometimes traveling and practicing separately from the team plus his Gleneagles mutiny and Tiger by not prepping to play his best golf—they shouldn’t be leaders now. While I agree that I would not vote for either to be captain, especially Phil after not even knowing the rules of play at the President’s Cup last week, I wouldn’t say they couldn’t or shouldn’t. Maybe Tiger is mellowing or getting more mature as a father and Phil, well, he just keeps getting smarter ever year.

Van Cynical, Would adding two-man scrambles to the President’s cup add interest? Or would the pros birdie every hole so there’d be no competition?—Bud via Twitter

Two-man scrambles would be less interesting and make it more of a putting contest than it already is. The fun of competitive golf is watching these guys try to recover from trouble. Plus, foursomes and bestball are long traditional formats of play. The scramble is a relatively recent addition invented so amateur hacks don’t have to play their own errant shots. I like your outside-the-bun thinking, though, Bud Lite.

If I set it at one-half, everybody takes the under but if I set it at zero, well, the house takes 100 percent of all the risk on the wagerin and the house never does that, it wants equal wagering on both sides. Instead of an over-under, I’d offer long odds on Tiger winning and shorter odds on Tiger not winning. But for betting purposes, you should stick to wagers on which you have firm information. All we know about Tiger is what we’ve been told by Tiger and he’s proven that he’s not a reliable source.

Van the Man, For future Ryder Cups, can we please just ban from the team or administration anyone associated with the U.S. team from 1995-2014?—Brian Bailey

You’re saying we throw out Boo Weekley AND Paul Azinger, too? I don’t think so, Bailbonds. I do find it funny that Azinger, the only guy who’s captained a U.S. Ryder Cup win in this century, isn’t a PGA of America go-to guy. He developed a system that worked, redid the points system and the picks… and nobody’s tried to do what he did ever since. In fact, they’ve slowly tried to undo his improvements. Good thinking, PGA of America.

Sicklevator, Is it true that the PGA Championship and the U.S.-based Ryder Cups don’t use the one-ball rule?—David Troyan via Twitter

Practically every pro tournaments played under the Rules of Golf use the one-ball rule as a Condition of Competition, which would include golf’s major championships. The Ryder Cup used to have a one-ball rule (see Seve vs. Azinger in ’91 Ryder Cup at Kiawah) but the PGA of America dropped it later for foursomes play for the convenience of players, who want to support the ball companies who pay them to play their models. It’s pathetic that even the Presidents Cup plays by the accepted rules of golf while the Ryder Cup (in America) doesn’t. Yet another black eye for the PGA of America.

Vanster, Did anyone say what Phil’s second ball was? He is Mr. Callaway but could it have been one of Zach’s Pro V’s?—John Schwarb via Twitter

You said it, Schwarbie. Phil is a Callaway guy. Phil said it was a different Callaway ball that was firmer than his regular ball—Callaway makes a Chrome Soft model. All we can do is take his word for it but it would be very bad form for a highly paid Callaway endorser to be seen using a Titleist and I’m certain Phil wouldn’t do that when he was likely to be found out. It had to be a Callaway.

G-Unit, I was too busy watching college football and sleeping but I heard they played a golf exhibition in Korea. Who won?—Bustinpar via Twitter

Plenty of shots were fired, Busty. South Korea hit some long bombs with their better swing planes and launched some impressive missiles while the North Koreans, led by Dennis Rodman, tanked and faded in the trenches. It was shown on TMZ—or was that DMZ?—and I think the final was South Korean 38 parallels, North Korea, 35 parallels. Enough silliness already? Yeah, agreed.

Van Cynical, When I asked (you) who, currently off the radar, might be a factor in majors to come, one I thought of was Matt Fitzpatrick.—Lionel Mandrake

Good call there, HO Gauge. Now you’ll have to come up with another candidate because after his first European win, Fitzpatrick is no longer off the radar.

Vans, At the Frys.com Open this week, what vineyards will you visit? What’s your favorite wine? Will you be able to see any golf this week, literally?—Golf Connections ML via Twitter

In order, No, None and Yes. I’m not a wine drinker and even if I was, I am in Napa to cover golf. No time to sightsee, Medium-Large, and if there was, it wouldn’t be wineries. If the traffic is as bad all week as it was Tuesday getting to Silverado, I’m not sure anyone will see any golf. Took me an hour to cover the last eight miles. Welcome to California, I guess.

Sickmananoff, Idea for tour-match play event: Something modeled after the NCAAs with players teamed by schools. Big sponsor dollars.—Jeff via Twitter

Your master plan has some gaping flaws, JeffyLube. Who does Vijay Singh partner with? Or Rory McIlroy? Can Troy Merritt of Boise State find a partner? Or Jerry Kelly from the University of Hartford or Dustin Johnson from Coastal Carolina? The college golf powers would have plenty of alumni for matchups—there might be multiple teams from Arizona and Clemson–but few for smaller schools, . Also, big sponsor dollars from whom? Universities aren’t going to sponsor this and I don’t see the attraction for corporate sponsors. What’s their college connection? I don’t get it. Two thumbs and one big toe down.