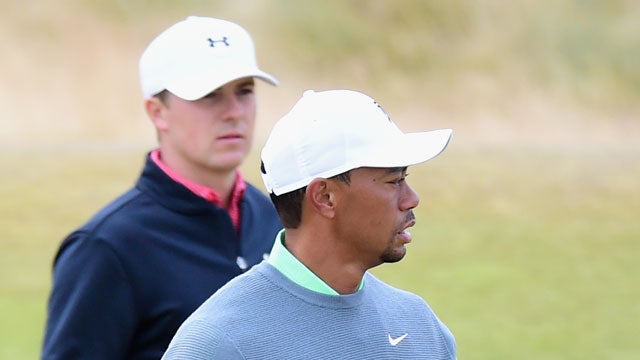 Jordan Spieth and Tiger Woods walk across a green during a practice round prior to the start of the 115th U.S. Open Championship.
Getty Images

The Old Course at St. Andrews beckons, but first, we’ve got to slog through the Greenbrier Classic (slog may be considered literal after one of the wettest Junes in history) and the John Deere Classic.

Tiger Woods will tee it up at Greenbrier and Grand Slam chaser Jordan (Jor-El) Spieth will play the Deere, so it should be two very interesting weeks of undercard golf.

Meanwhile, here’s what escaped from the Van Cynical Mailbag this week:

Van Cynical, What would be a bigger deal, Jordan Spieth winning the Impossible Quadrilateral or Tiger Woods winning any other event?—Kris B via Twitter

While I am usually loathe to point out the failings of others, let me give you credit for almost knowing some serious golf history. The Grand Slam was once dubbed The Impregnable Quadrilateral (not Impossible). That was back in the days of other equally catchy nicknames like The Sultan of Swat and The Splendid Splinter. Spieth winning the Slam would be huge—it would top the Tiger Slam not only because it would be in a calendar year but because the global social media is exponentially bigger now than it was even a decade ago. Tiger winning again would be a big deal, absolutely, but a win at, say, Greenbrier, wouldn’t touch Spieth’s hypothetical Slam. If Tiger won a major and restarted the Countdown to Jack and 18 majors hysteria, now that might rival Spieth’s Slam.

Sickle cell, Is Rory McIlroy about to win the Open by 10 strokes? He’s got to be chomping at the bit, whatever that means.—Chad Rucker via Twitter

No doubt about it, Rucksack. The bigger question, is he chomping at the bit or champing at the bit? Champing is the original word in the phrase, used to describe a horse who was excited or ready to run and was thus straining against its harness. In the 1930s, with nothing better to do in The Great Depression except alter cliches, chomping replaced champing. McIlroy has a love-hate relationship with the Old Course. He hated it when he first saw it, then shot 69 in his first round there as an amateur. At the 2010 Open, he blistered a record-tying 63 in the opening round in calm conditions. The next day, play was halted due to high wind early in Rory’s round. He returned after the suspension and shot 80. Rory admits he doesn’t like playing in wind or rain. So Rory is not your favorite if the weather isn’t perfect. 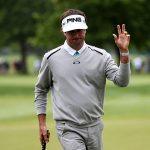 You may also like Tour Confidential: Can Jordan Spieth Pull Off The Grand Slam?

Moving Vans, Jordan Spieth playing the John Deere before flying across the Atlantic to complete the third leg—good move?—Nevan Prendeville via Twitter

It’s a good p.r. move for Mr. Perfect Spieth, Nevan-Nevan Land. It shows his loyalty to a tournament that helped him get his first win and establish his career. It’s not great preparation for the Open, but maybe it’s better if Spieth spends the week before the Open focusing on trying to win a PGA Tour event instead of sitting around and letting the Grand Slam Chase get heavier by the minute. It might turn out to be a good strategy, despite the potential fatigue factor.

I have no first-hand knowledge about how Justice does it, Polson Pen, but the standard procedure is either to pay (overpay!) a player for a contracted appearance at a clinic or party, or sign a player to an ambassador program, which amounts to an endorsement deal. Phil and Tiger reportedly got at least $1 million to play in previous Greenbriers. When you think about it, was that any different when Tiger endorsed Buick and, coincidentally, usually played all four of the Buick-sponsored PGA Tour events? Fake appearance fees have been going on under the table on the tour for years. It’s far easier for the tour to look the other way than to address the issue.

Van Spherical, At what point does one look himself in the mirror and give up his 15-year-old irons?—Brian Bailey via Twitter

Sounds like an existential crisis, Bailstorm. I deal in reality. Are you playing bad because your irons are old or because you never practice? Think about. Maybe $800 worth of new irons might be better spent on lessons. Upgrade your swing first, upgrade the irons later. Spend 30 minutes a day practicing chipping for a week, then tell me you don’t feel better already.

Van Cynical, Didn’t take my hat off when shaking hands on 18 and now the Grill Room Crips are always hitting into me. Any suggestions?—CapBozo via Twitter

BozeMan, you need to get out of that club. The Crips are one of the largest and most violent street gangs in America. I’m not sure what they’re doing in your grill room, but it’s not going to end well. So make like Salman Rushdie and make yourself scarce. And lose the hat. Problem solved.

Van Cynical, Any reports of Phil Mickelson playing in a card game with Teddy KGB?—Kevin Montminy via Twitter

Yes, K-Mont, but they played Go Fish. I doubt if Phil lost $3 million at Go Fish. I bet he’s pretty good at Go Fish, actually. Love your insider reference but it’s on the verge of being a Dreaded Dated Reference—the movie, “Rounders,” was from 1998. That’s 17 years ago. Time passes quickly, you’ve got to stay relevant. Otherwise the next thing you know, you’re writing, “The desert afternoon was hotter than Rita Hayworth.”

Van Sickness, Nice win for Bubba Watson. Why did he get voted by players as most disliked player on the PGA Tour?—Bustinpar via Twitter

Bubba can be kind of whiny on the course, Busty, but that’s hardly unusual on the Prima Donna Golf Tour. Bubba is a one-of-a-kind person who’s got some issues. He says he’s got ADD, who knows? He desperately craves attention in a peacock-kind of way, yet is uncomfortable when he’s in a crowd. Bubba is often charming and accidentally insulting in the same paragraph. I think he was more of a default vote because players didn’t know how to spell Camilo Villegas on the ballot.