With Bay Hill and Matt Every’s clutch putter in the rear view mirror, the golf world’s collective attention has turned to Augusta National. But as players like Steven Bowditch, Martin Laird and Ben Curtis — the last three Valero Texas Open winners — will be quick to remind you, there are still two events that stand between us and the highly anticipated first major of 2015.

In 2014, TPC San Antonio played as one of the toughest tracks on Tour, producing an average score of 1.28 strokes over par. It played harder than two major venues — Valhalla GC and Royal Liverpool — with Doral, Torrey Pines, Congressional, Innisbrook and Pebble Beach the only non-major venues that played more difficult. Bowditch won last year with a grand total of eight-under 280, narrowly edging Will MacKenzie and Daniel Summerhays despite a sloppy final-round 76, his highest score of the week by seven shots. 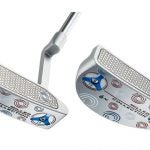 A look at the last five winners (Bowditch, Laird, Curtis, Brendan Steele and Adam Scott) reveals a hot putter as the key to victory. Bowditch needed 31 putts in the final round last year but still finished T8 in total putts and fifth in putts per GIR. On the way to their respective victories in 2013 and 2012, Laird and Curtis finished second and third in strokes gained/putting. Steele finished T2 in putts in 2011 and Scott finished top 15 in multiple putting categories en route to a W in 2010.

With those numbers in mind, here’s a look at who we like this week and the putters that will be in use. Also included are odds from golfodds.com.

Kuchar is 21st in strokes gained/putting this season and has top-three finishes at the Sony Open and Humana Challenge. He hasn’t contended since then, but his record at TPC San Antonio is promising — he finished T13 there in 2012 and T4 last year (even after a final-round 75). Kuchar is also leading the Tour in one-putt percentage (45.3%) and is third in putts per round (27.66).

Kuchar is putting with a 42-inch Bettinardi Kuchar Model 2 mallet. It has 6° of loft to accommodate Kuchar’s arm-lock style grip that significantly delofts the putter.

It’s hard not to pick Spieth almost every week, especially when he’s playing in his home state. The 21-year-old is having a solid year with the putter, ranking first in putting average, first in putts per round (27.46) and third in one-putt percentage (44.9%). And those are just stats. Let’s not so quickly forget the clutch putts he poured in at the Valspar Championship, where he grabbed his second PGA Tour victory right out from under Patrick Reed and Sean O’Hair.

Spieth is putting with a Scotty Cameron 009 prototype, the same one he used for victories at the 2013 John Deere, the Hero World Challenge last December and the Valspar a few weeks ago.

Another guy playing in his home state, Walker, like Spieth, is nearly always in the conversation come Sunday afternoon. Walker is ninth in strokes gained/putting this season, ninth in total putting and sixth in putting average. By this time last year, Walker had three wins. He’s got a solid chance at his second of 2015 at TPC San Antonio, following his nine-stroke Sony Open runaway in January.

Walker is putting with a Scotty Cameron Newport 2, which he originally used in 2003, but had restored, refurbished and re-weighted late last year.

Yet another native Texan, Palmer has had a glimmer of success at TPC San Antonio, finishing T9 there in 2010 and T15 in 2013. He’s already had a number of close calls this season with a T2 at the Waste Management and a T12 at Doral. Palmer’s putting numbers this season don’t exactly jump out at you, but he is fifth in total putting and eighth in putting from inside 10 feet—both promising.

Palmer’s putter is an older version of the Odyssey Dual Force Rossie II.

Check back Monday to see who won, and what club(s) played the biggest role in determining a champion.