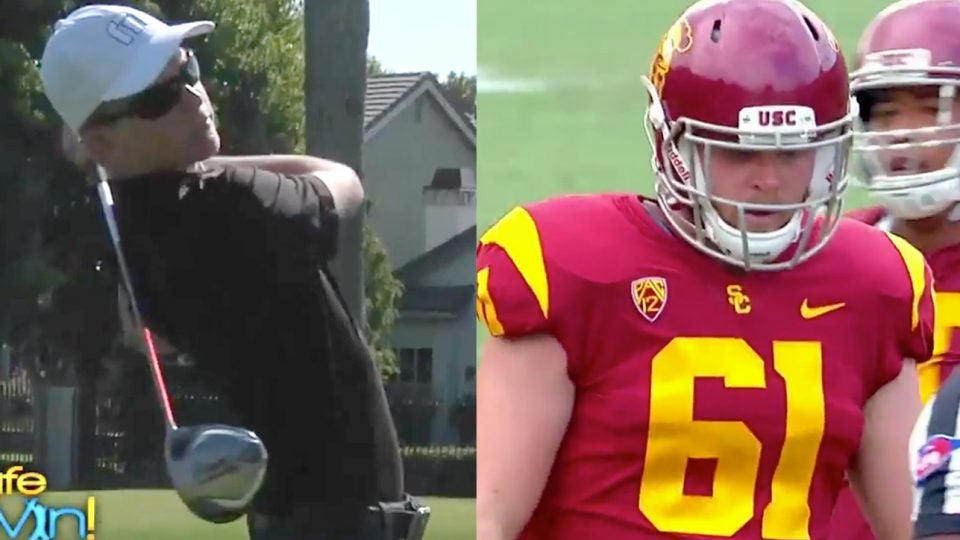 Jake Olson, at 14 (left), was hoping to play on the PGA Tour, but he starred on the football field on Saturday.
Live Live and Win/ESPN

The most memorable moment of the opening weekend of college football came from USC sophomore Jake Olson, who despite losing his eyesight at age 12 has found numerous ways to inspire those around him.

Olson was the long snapper for USC’s final PAT in the Trojans’ victory over Western Michigan Saturday. It was his first live game action.

“To be able to say I’m a Trojan and have a snap under my belt in the Coliseum, is there anything more special?” Olson told reporters afterward. “It’s awesome.”

Olson is a motivational speaker, author and founder of the Out of Sight Faith foundation. He’s also no slouch on the links. Olson was featured on Live Life and Win when he was 14. When he was 11 he told his dad he wanted to be a PGA Tour player, and even after he lost his eyesight a year later his goal was still to become the first blind golfer to play on the PGA Tour.

But Olson eventually found his way onto the college football field (his last day with eyesight was spent at a practice with the USC football team).

A good read from Gary Klein in a 2015 LA Times story says Olson consistently records scores in the 80s. His dad, Brian Olson, helps him get around on the course.

“I’m not staring at a huge lake, thinking, ‘Oh no, there’s a huge lake?'” Jake Olson told the Times. “I’m just focused on the mechanics of the swing.”

You can watch the video of Olson as a 14-year-old aspiring golfer below.

This is anything but a regular PAT.

Jake Olson, blind since age 12, just snapped for the first time in a live game. https://t.co/amyHcFoVue