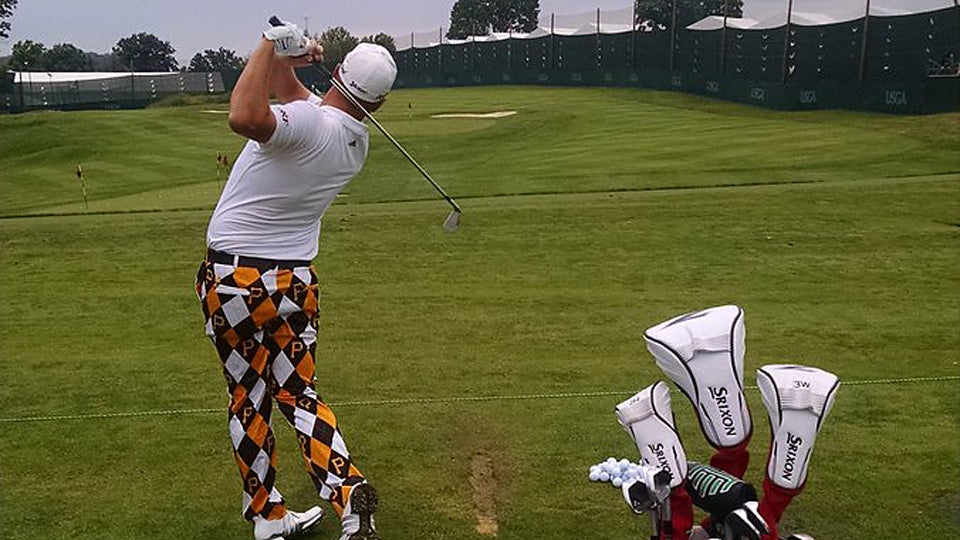 Mike Van Sickle is still waiting to see if he gets a spot in the 2016 U.S. Open.
Courtesy Photo

I had a pretty cool day at Oakmont Saturday. Brian Routheaiux, my caddie, and I pulled into the parking lot at the club and grabbed a prime parking space. Probably a better space than an alternate for the U.S. Open should have but I considered it just a well-placed drive.

There was still another open spot to the right of my red Camry. Within seconds, an official Lexus courtesy car swung in. I quickly realized that ZJ had just parked next to us. Playing it cool, Brian and I got out and began unloading our necessities from the trunk. Reigning British Open champ Zach Johnson played it less cool by opening the trunk of his SUV only to have three pairs of shoes come crashing down to the pavement. He looked at us and said, “Well, that’s not the best way to start the week.”

I replied, “Not at all, get those bogeys out of the way now.”

He gave a quick chuckle and took a step over, extending his hand and simply saying, “Hi, I’m Zach.” Minutes later, I was in the Oakmont locker room putting on sunscreen and Jason Day walked in right behind me. Cool. After some sports talk with the locker room attendant about the Pirates and Neil Walker, my former high school basketball teammate who now plays for the New York Mets, I walked past Brandt Snedeker and new Memorial Tournament champion William McGirt. Then I found Brian and said with an inescapable grin, “This is going to be a fun week.”

Joe Boros, my pro from Treesdale Golf & Country Club, met us on the range. There, we ran into my old Big East rival Keegan Bradley. I played college golf for Marquette, he played at St. John’s. We wished each other well for the week. Then Brett Bergman, a high school friend who is an Oakmont member, met up with us and we went down to practice different shots around the chipping green. We hit some putts and the four of us were off to scout the course. As an alternate, I’m allowed to use the practice facilities and walk the course, but I can’t play it.

On our way to the first hole, we heard, “Hey guys!” It was Mrs. Bergman (Brett’s mom) as she went zipping past, waving, while shuttling a player to the range in a golf cart. On the 8th hole we caught up with, you guessed it, Zach Johnson. We small-talked for a while and walked up the ninth fairway together. I couldn’t recall if he played here in 2007 and asked if he had. He said, “I was here in 2007. I’m older than you think.”

He was talking with Brett and while discussing the course, Zach innocently asked, “Have you ever played in an Open…I’m sorry, that’s a stupid question.” Zach called it quits after the ninth, we wished him luck and continued on.

I told Brett as we walked off the 10th that he should have told Zach, “No, but I did play with Sergio at Pebble once…so basically, yes.” Brett and one of his brothers did get in a round of golf with Sergio a few years ago, but that’s another story.

We all bust out laughing. Yeah, that’s right, so I think he might’ve been at Oakmont in 2007.

VAN SICKLE: With Some Luck, I Could Be the Last Man in the Open

A fast-moving storm chased us off the course at the 11the hole. We stopped in at player registration but as an alternate who wasn’t officially in the field yet, there wasn’t much to be done.

We were still at Oakmont in the clubhouse when he looked up at the Pirates game on the TV screen and they were showing some guy throwing out the ceremonial first pitch. That’s when I said, “Hey, that’s Jason Day! What’s he doing there?” If I’d known he was doing that, I might’ve offered some advice earlier when he was putting on sunscreen. I threw out a first pitch at a Milwaukee Brewers game a couple of years ago and what I learned was, nobody cares how hard or how well you throw the ball, so just toss it in and try to look good for the pictures.

We also ran into Oakmont pro Bob Ford, who wished us luck on getting into the field, and then noticed amateur living legend Nathan Smith working the autograph table where two posters of the infamous Oakmont Squirrel were laid out for players to sign. Nathan, who lives in Pittsburgh, has won four U.S. Mid-Amateur titles.

After explaining what needed to happen for me to get in the Open field–an assortment of finishes, including Joost Luiten to finish worse than third in the European Tour event in Austria–Nathan said, “Joost Luiten nothing. Tomorrow you’re gonna sign on that squirrel!”

That’s what we’re hoping for, Nathan.