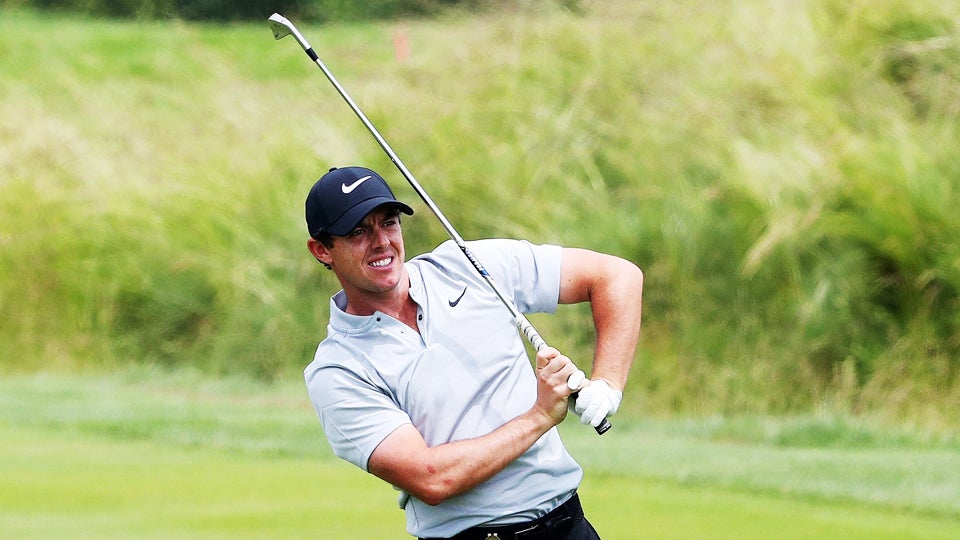 OAKMONT, Pa. (AP) — Rory McIlroy hit driver onto the 17th green, a superb shot until it tumbled off the back and into the sand. He thought his bunker shot came off perfectly, except that it rolled all the way across the green into another bunker.

The bogeys kept piling up for McIlroy on Friday in the U.S. Open.

The hole he dug himself at Oakmont kept getting deeper.

McIlroy ended the stop-and-start opening round with his fifth bogey in seven holes and signed for a 77, matching his worst score in a U.S. Open.

“It’s been tough. It’s a long first round. It’s taken us over 24 hours to complete it,” McIlroy said. “It has definitely complicated the matter a little bit. But when you shoot 77, everything is a bit complicated.”

With all the rain, a soft course would seem to play right into his hands. McIlroy set the U.S. Open record in these conditions at Congressional five years ago.

A faulty swing doesn’t work in any conditions.

McIlroy said he was struggling with his swing earlier in the week, and that was evident quickly. Playing conservatively to keep the ball out of the wet, thick rough, he hit iron off the tee on his opening three holes and missed the fairway every time.

He still was in reasonable shape – anything around par is good at most U.S. Opens – until he fell apart over the final seven holes. It started with him twice hitting into the rough on the par-5 12th hole for bogey. It ended with a shot so far right that it was beyond the gallery and a shot right of the green that he couldn’t get up-and-down.

“You see guys shooting in the red – there’s a 66, a 67 – and there are scores out there to be had,” McIlroy said. “You really need to be in control of your golf swing, though, and over the last two days I haven’t been. So I need to work on that. But there are low scores out there, and if I’m able to get myself together, I feel like I will be able to shoot one of those, and I can stick around for the weekend at least.”

McIlroy has missed the cut twice in the U.S. Open. Both previous times, at Pebble Beach and at Olympic Club, he shot a 77.

But he wasn’t alone in this case.

Thousands of fans who followed McIlroy, Masters champion Danny Willett and Rickie Fowler saw only four birdies among them. Willett had a 75, while Fowler had a 76 and will try to avoid missing a third straight cut.

McIlroy appeared to be turning the corner last month when he rallied with two fairway metals that led to birdie and eagle over the final three holes to win the Irish Open. He finished two shots out of the lead at the Memorial. He came to Oakmont early to prepare.

And then he started the U.S. Open by hitting only five fairways and eight greens.

“You’re thinking of hitting shots a certain way, and then all of a sudden, the golf course is completely different,” McIlroy said. “It would almost be tougher if it was the other way. But it is a bit of an adjustment, and that’s been hard.”