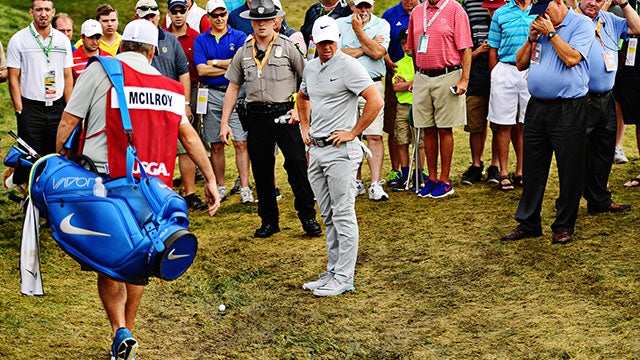 OAKMONT, Pa. — Rory McIlroy hit iron off the tee on his first three holes and missed the fairway each time. He bogeyed two of those holes.

He changed tactics, going for the green at the driveable 17th hole, but wound up in a precarious spot in the left greenside bunker. He thumped that shot out of the sand, across the green and into … another bunker. Bogey again.

“I think for me the toughest thing is just trying to stay positive and not get too down on myself,” said McIlroy. The world No. 3 bogeyed 18, too, for a first-round 77 in which he hit just five fairways, eight greens in regulation, and a not very helpful 34 putts. The score matched his worst start in a U.S. Open.

At least he wasn’t alone. The start-and-stop Thursday-Friday opening round claimed some big-name casualties, a harsh reminder that the golf ball doesn’t care about the pedigree or World Ranking of the guy hitting it.

No. 1 Jason Day also had a bunker-to-bunker fiasco, at the 7th hole, leading to a double-bogey 6. By the time he made his first birdie of the round at the par-4 14th it nudged him back to four over par. He tilted his head back, opened his arms to the heavens, and didn’t make another birdie on the way to a discouraging 76.

The so-called Big Three played more like a Little Three, coming home in a combined 15 over par. “I’m not really sure how my score stands right now,” Jordan Spieth said after signing for a two-over 72 that he said didn’t reflect how well he played. He hit eight of 14 fairways and 10 greens, and took 30 putts.

“I know that at the end of the day, the USGA is going to try to have even par win the golf tournament,” Spieth added after his four-bogey, two-birdie effort, “and I know that I can shoot two under in the remaining 54 holes no matter how the course plays. I know I’m capable of it. I’m in it.”

Spieth was six shots behind surprise first-round leader Andrew Landry and still processing exactly how much Oakmont had changed from the fast and fiery practice rounds. After hitting his tee shot into a fairway bunker at the second hole, Spieth watched as his second shot landed on the green only to spin back some 50 yards off the front of the green and down the hill.

“That’s as good as I could do,” Spieth told his caddie, Michael Greller. “You know?”

He pitched up and two-putted for bogey.

Day, Spieth and McIlroy had all won in their second-to-last starts before coming to Oakmont, so it appeared the best players in the world were playing the best coming into this week. So much for that theory — now the best in the world find themselves needing to make up ground fast.

McIlroy, who thrives in soft conditions, was perhaps the biggest stunner, unable to make anything happen even on a damp course that was as vulnerable as it’s likely to be the whole week.

“Honestly, I’ve been struggling with my swing,” said McIlroy, whose playing partners, 5th-ranked Rickie Fowler and Masters champion Danny Willett, struggled along with him, shooting 76 and 75, respectively.

Dustin Johnson (67), Bubba Watson (69) and Henrik Stenson (69) were the only top-10 players in the World Ranking to post red numbers. Phil Mickelson, a trendy pre-tournament pick after his tie for second at the FedEx St. Jude last weekend, his fifth top-five finish this season, blew his opening tee shot wide left and never quite found his groove as he settled for a 74.

“With the way the golf course is, with it being so soft,” McIlroy said, “I might just go out there in the second round and hit a lot of drivers and try to be as aggressive as I possibly can be.”

It’s certainly worth a try.