CHARLOTTE — There are few things in sports lonelier than playing bad golf. For two days at the 99th PGA Championship, Hall of Famer Phil Mickelson had nowhere to hide and, divorced from his career-long caddie Jim (Bones) Mackay, seemingly no one to lean on. Shoulders slumped, head down, often walking far from his playing partners, Mickelson was a gloomy, forlorn figure. On Friday he shot a raggedy 74; coupled with his birdie-less opening 79, Mickelson missed the cut by a mile, just as he had three weeks ago at the British Open. Afterward, no one wanted to speak of what they had just seen.

“As a caddie I don’t want to talk at all,” said his new looper, Tim Mickelson.

“Not when I’m caddying. Good try, though.”

Asked by text if he cared to share any insight, Mackay replied, “No sir. Have a great weekend.” This from a man who is now paid to talk about golf.

Phil himself was so bothered he, too, just wanted to get away. After a few perfunctory remarks to assembled scribes he retreated to a distant, deserted corner in the locker room. I happened upon him there but before uttering a syllable, he said, “You’re the last person I want to see right now. Just turn around and walk away. I need a minute to be alone. I need some space.” Later, in a fractionally more reflective moment in the parking lot, Mickelson allowed, “I need some time off. I’m a little tired.”

Indeed, at Quail Hollow he played better than his scores would indicate but was sabotaged by mental fatigue. “Not really controlling my thought process, where I want the ball to go,” Mickelson said, analyzing his failings. “I’m not real focused out there. I’m having a tough time visualizing the shot. I’m having a tough time controlling my thoughts and not letting it wonder to what I don’t want to have happen.”

Given that Phil and Bones filibustered over every shot, it’s impossible not to wonder how much Mickelson has been unsettled by having a new caddie for the first time in a quarter century, especially when it’s his little brother who has never before been a full-time looper. 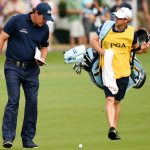 “There’s way less interaction,” says Jimmy Walker, Mickelson’s playing partner over the first two rounds. “It seems like he’s mostly doing it on his own. I don’t know why he doesn’t have a real caddie. I don’t. It would really be beneficial to him, I think.”

Phil tried to dismiss that notion, saying unconvincingly, “I don’t know how that would really affect the shots I’ve been hitting.” Trying to find a little silver lining, he said, “On the range, I’m having some of the best sessions, swinging the club fine, striking it pretty good.”

It’s true that the penal setup at Quail Hollow magnified every little mistake. Walker offered his playing partner an alibi, saying, “It’s a hard golf course. It’ll kick you right in the…”

Mickelson, an arthritic 47-year-old, is now four years removed from his last win. It’s one of the cruelties of golf that you never know when you’ve enjoyed your last victory. Phil is now focused on trying to earn a spot on the President Cup team; he’s played for every U.S. squad in the Ryder and Prez Cups going back to 1994, one of the more underrated achievements in golf. Mickelson brings many intangibles but is running out of time to prove to U.S. captain Steve Stricker that his play is good enough to warrant a spot on the team. Phil is currently 17th in the points standings but will likely be passed by a couple of others at the culmination of the PGA. If Walker was captain, would he burn a pick on Mickelson?

“Not right now,” he said. “Too many other good players playing well.”

Dufner, growing tired of having to listen to so many questions about Mickelson, posed his own inquiry in inimitable Duf fashion: “If Phil had a vagina would he play on the LPGA tour?”

As always with Mickelson, there are more questions than answers.