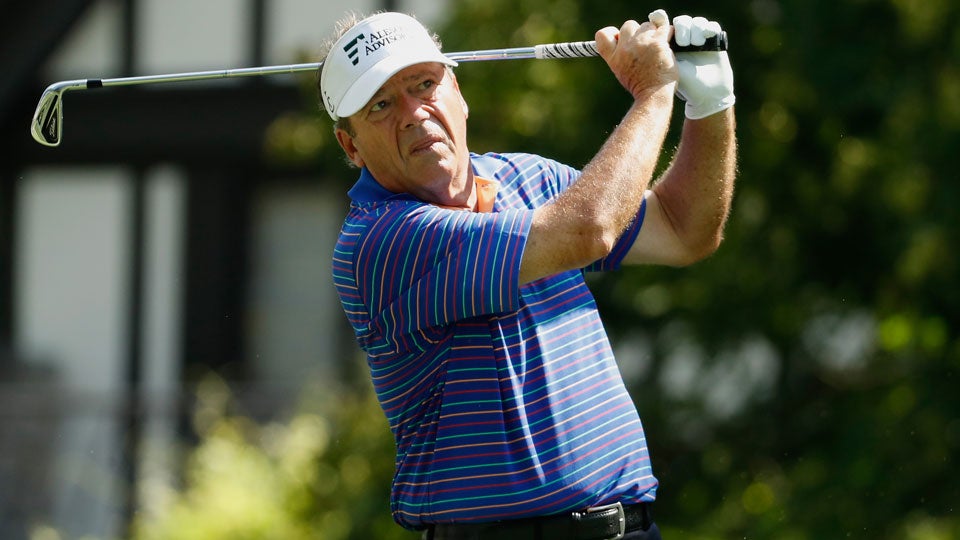 Joey Sindelar was a seven-time winner on the PGA Tour, most recently in 2004.
Getty Images

COLUMBUS, Ohio — Senior golf is for relics. That includes the players, a lot of the fans and some of the media.

So what better place to bring back a club long thought to be extinct than the U.S. Senior Open, home of all things that have aged well?

Joey Sindelar grabbed the lead halfway through Friday’s second round here at Scioto Country Club by following his opening 69 with a stellar 4-under 66, and he did it by using a dinosaur: a 1-iron.

Sindelar led Gene Sauers by one stroke and Stephen Ames and Glen Day by two after the field’s morning half completed play. Due to approaching bad weather, the USGA said Saturday’s third round would start early in the morning off both tees.

Let’s just clarify that the 1-iron Sindelar used is actually a Titleist 2-iron head bent to 16 degrees loft, the old standard for 1-irons.

Not that anyone under the age of 30 would know what a 2-iron is, either, since they are as rare as puffin sightings, too.

You may remember Sindelar from his decades on the PGA Tour. He’s an Ohio State alum, so he drew a popular all-Buckeye pairing the first two rounds with John Cook and Rod Spittle. That led to a great TV moment Thursday when, after the first two players in the group hit, Fox Sports host Joe Buck prepped a shot by saying, “And now, Spittle.”

Sindelar was from tiny Horseheads, N.Y., and a close friend of former Tour player Mike Hulbert, who also grew up in the area. A wrist injury early in his career kept Sindelar from fulfilling his potential, but he was a solid player who won seven Tour titles, including two at the B.C. Open, played in upstate New York.

Sindelar had back surgery a few years ago and is greatly slimmed down from his rounder days as a power player. He brought back a 1-iron as a strategy play this week. At Scioto, he said, you’ve got to hit the fairways or hit it so long off that tee that you’ve got a wedge into the green from the rough.

Why not 3-wood off the tee?

“I’m not a great 3-wood player,” he said. “My 3-wood headcover hasn’t come off yet this week. It’s either the 1-iron or the driver. You’ve got to do the math and it’s not the same answer for everybody.”

Why not just hit some of those fantastic modern hybrids?

“I just can’t hit them on line,” Sindelar said. “I’m going to keep trying. The ball goes up in the air. When you’re 225 to 230 yards over water on a par 5, which we seem to have every week, those hybrids look really beautiful but I’ve got a left-right problem with the hybrids that I haven’t solved yet.”

So he’s sticking with the 1-iron.

“I have one of those fancy-schmancy Titleist 2-irons that launches higher,” Sindelar said. “My old 1-iron was a Tommy Armour 845, which is a magnificent club. But these go higher and that’s what I need. It’s been a great club this week because we need to hit fairways at Scioto. I’ve used it four or five times a day.”

The plan has worked through 36 holes at a tough Scioto track. Maybe there’s something about being encouraged by the hometown crowd that helps, because this hasn’t been a stellar year of golf for Sindelar on the senior tour. Sindelar, 58, has managed only four top-20 finishes in 15 starts, only two of them in the top ten and none since his third-place result at the Regions Tradition in May.

He is a classic feel player, so when you ask him what he’s doing differently in this senior major, all he can do is shrug and crack a joke. The hometown fans. His son, Jamie, caddying for him. Hitting fairways (8 of 11 this day) and making putts (only 25 in his 66). They all add up to a great start for the Open.

He says he’s continuing to rebuild his swing after back surgery in 2012, when he had to give up his lifetime reverse-C style golf swing and switch to the stack-and-tilt method favored by his current coach, Mike Bennett.

“As I continue to get stronger and learn how to produce power with this new swing, it’s kind of like squeezing a water balloon,” Sindelar explained. “I get more speed, and then the timing changes a little bit. Then I’ve got to grab it and figure out what to do with it. So I’ve seen little spurts when it’s dialed in, but then I get a little stronger and I’ve got to figure out some timing again.”

He hasn’t won a senior event, so it’s been over a decade since his last victory, but he believes he’s getting better, and at 58, he’s thrilled to still be competing.

“Thank goodness for Mike Bennett and stack and tilt,” he said. “I have to overdo it a little because any time I migrate to the right with my swing, that’s when I start hurting. So I have to get left, stay left and rotate—then put on the left-hand blinker and go left. I generated my old power with my arms. Now I’m doing it with rotation, but it took me four months of just hitting 9-irons to get half of the dipping through impact out of my knees. Those old habits are hard to break but it’s been so worth it.”

He’ll have another 36 holes at Scioto to tinker with it. That’s a good thing.