U.S. Open: How Paula Creamer Beat the Beast of Oakmont 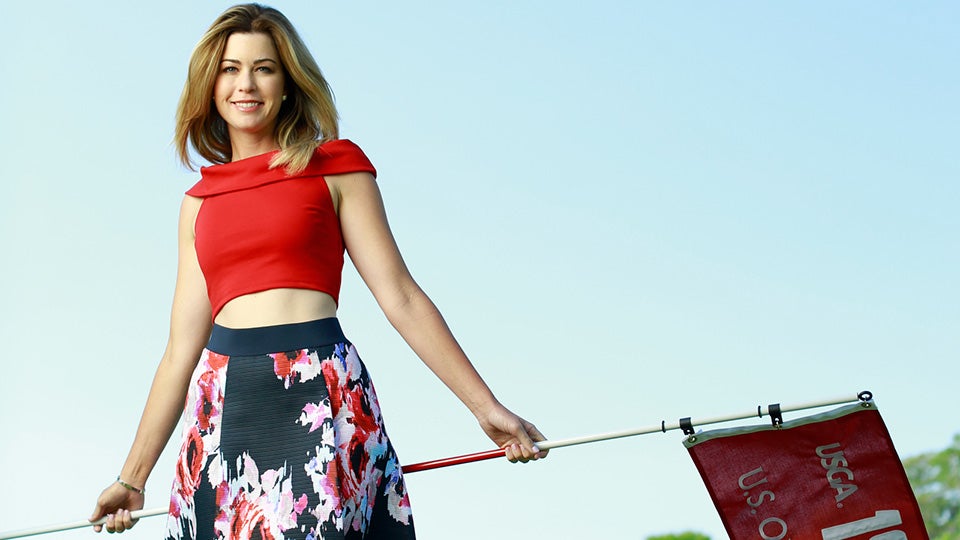 Creamer started gearing up for the Oakmont Open a year in advance, talking to PGA Tour players about their experiences there and making scouting trips to the historic course.
Ben Van Hook

“I remember everybody saying what a beast it was, what a monster it was, how scary it was,” Paula Creamer said recently. “I swear, the first time I played it, I thought it was the greatest golf course. I was so in love with it. I wasn’t scared!”

Neither was the little girl by the lake in 1931’s Frankenstein, and we all know how that turned out.

Creamer, of course, was no longer a little girl when she teed it up at the 2010 U.S. Women’s Open at Oakmont Country Club—the aforementioned “beast.” She was 23, a winner of eight LPGA tournaments, and already burdened with the tag of “best player without a major.” But after a week that she remembers as “magical,” Miss Pretty-in-Pink was her nation’s champ and a freshly minted authority on how to win on golf’s toughest track.

“I think the hardest part about Oakmont is that, mentally, it’s exhausting,” Creamer said during a May interview at Isleworth Country Club in Windermere, Fla. “Every shot is just so demanding, whether it’s a two-footer or a tee shot.” While not presuming to offer advice to the men playing next week on the USGA’s most-experienced Open venue, Creamer graciously shared her formula for victory. Here, then, are Paula’s tips for winning a U.S. Open at rough, tough Oakmont.

TIP NO. 1: Smash your thumb with a hammer.

Doesn’t matter which thumb, as long as it requires surgery. Creamer, sidelined for months by a 2009 injury and subsequent knife work on her left thumb, wore tight bandages at Oakmont and was limited to 30 range balls a day. “That was the first week my doctor cleared me to hit balls off the ground,” she said. “When I finished a round, they had a bag of ice and boom, it went right on my thumb.”

TIP NO. 2: Tweak your equipment.

Creamer had the grips of her clubs altered. “We had to build them up a little bit to give my thumb more support.”

“The thing about a thumb injury,” she said, “is that other parts of your body start to take over.” At Oakmont, Creamer’s altered hand action put more stress on her right side, particularly her elbow, “which was starting to kill me.” And because she’d been hitting balls only off a tee for weeks, her swing was shallower at impact.

Creamer started prepping a year in advance. She sought advice from LPGA Hall of Famer Patty Sheehan, who won at Oakmont in 1992. She gleaned insight from PGA Tour players bearing Oakmont battle scars. She studied video of the 2007 U.S. Open, won by Ángel Cabrera. She flew to Pittsburgh for strategy tutorials with Bob Ford, the renowned Oakmont club pro. “I don’t normally do things like that,” Creamer said, “but with my past history at U.S. Opens, I wanted to try something a little different.”

TIP NO. 5: Draw on your experience from said “past history.”

“I definitely had my opportunities to win, a lot of top 10s, top 15s. I think the hardest one for me was Saucon Valley in 2009. On Saturday the USGA moved the tee up on the 10th hole to make it a drivable par-4, and I took the bait. I pulled driver out and wound up making a 7. It was very sad after that, and I realized that you can’t play a national championship the way you do a normal tournament. You have to stick to your game plan, no matter what.”

TIP NO. 6: Have something to prove.

Creamer, the 2005 LPGA Rookie of the Year and a star for three victorious U.S. Solheim Cup teams, was constantly reminded that she was the best player never to have won a major. “It was pretty unfair, since she’d only played a few,” said her father, Paul, a retired naval and commercial airline pilot. “But it had an impact. It was a thousand-pound weight on her shoulders.”

TIP NO. 7: Forget you’ve got a thousand-pound weight on your shoulders.

“I had zero expectations,” Creamer said. “I teed off on 10, the first day of the tournament, and that’s not an easy tee shot. The whole thing’s sloping. I made about a 4½-footer on that hole, and I was like, O.K., I’ve got my first par at Oakmont.”

“I didn’t look. My caddie, Colin Cann, and I have been together since Day One, and he knew how important it was to stick to the game plan. If we made a mistake, it didn’t matter. We just kept on going.”

“She had to stay out of the rough,” her father said, holding up his hand as if he were the one with the throbbing thumb.

“Oh, yeah,” Paula echoed. “Number 12, par-5. I don’t know what it was, but visually that hole didn’t set up well for me with those left bunkers. I kept pulling it into the rough. I’d take my 9-iron out—I mean, you couldn’t advance it that far out of the rough—and I’d go, O.K., it’s gonna hurt!”

Storms hit on Friday afternoon, soaking the course and postponing the completion of the second round. Creamer played 29 holes on Saturday and 23 on Sunday, which was roughly the equivalent of having her sore thumb kicked repeatedly by a mule. “It was so swollen, it was huge,” she said. “I couldn’t really warm up. I’d putt a couple of balls and take some practice swings.”

When the horn blew on Friday, Creamer was short-sided behind the 3rd green. “That’s death,” she said. In practice rounds she had dropped balls there, experimenting with different shots. “I tried to putt it,” she said. “I tried to bump it. I tried the one-bounce check. Now the storm was coming, and I didn’t want to sleep over that chip. That would be awful.” Summoning up the courage, she smacked one firmly into the bank and watched in wonder as her ball hopped onto the green and stopped a foot from the hole. “I wish there’d been a camera there because it was the best chip I’ve ever made.”

“I went to the same bakery every day [the Oakmont Bakery]. It’s down on that little alleyway, that little strip. I’d get a cappuccino and a breakfast sandwich, and they made me cupcakes and stuff to take back to the house. They were awesome.”

TIP NO. 13: Don’t think for a minute that Oakmont’s greens are slower after a rain.

“My first putt on Saturday, I hit it 10 feet by. I’m looking at Colin, and Colin’s looking at me, and I was, Oh, my gosh, they’re definitely not slower. Oakmont is known for that, the fast greens. The golf course drains perfectly.” “IF THERE’S ONE COURSE YOU’D WANT TO WIN A MAJOR ON, THAT’S THE ONE,” SAYS CREAMER.

“On Sunday morning I looked at myself in the mirror and said, ‘Paula, you can do this. You can go out there and play like you believe in yourself.’ It’s weird to talk about it now, but it was really like a pep talk.” Actually, it was more like SNL’sxs Stuart Smalley saying, “I’m good enough, I’m smart enough, and doggone it, people like me!” Which is not a criticism; that guy is now a U.S. senator.

“That 1st hole is crazy. There are 10 ways to play it. I played with girls who hit iron off the tee, but I always hit driver.” On Sunday, Creamer’s chip from behind the green left her with an uphill eight-footer for par. “And I was so nervous, because you don’t want to have a three-stroke lead and bogey the 1st hole.” Nervous or not, Creamer rolled it dead center.

TIP NO. 16: Maintain a positive relationship with the golf course.

Creamer, while mindful of Oakmont’s reputation as a beast, clung to the notion that she was the beauty who could tame it. “It was that way the moment I arrived. I just felt like, Wow, this is so special, so cool. This is such a neat place.”

Na Yeon Choi and Suzann Pettersen were in hot pursuit, but Creamer—the only player under par for the tournament—refused to peek at the leader boards. “That stretch from 15 to 18 was so cool,” she said. “I remember making this putt on 14, and 18 green was right over there. Na Yeon or Suzann made a putt, and the gallery screamed. Then I made a 15-footer, and they screamed again. I knew that if I just kept playing the way I was playing, I would be very tough to beat.”

The USGA had moved the tee up on Number 17 [for the final round], making it a drivable par-4. The plan was, back tee, we lay up; front tee, we hit driver onto the green or safely into a greenside bunker. Creamer was unaware that she had a four-stroke lead—remember, no peeking at the leader board!—so she reached for her driver. “And Colin is like, Ummm, maybe we hit an iron. And I’m like, Noooo, we hit driver from the front box. That’s the plan! And he’s like, Paula, trust me. You want to hit an iron off this tee.”

Creamer hit her iron into the first cut of rough, but she parred the hole. (“Advil helped.”)

“Walking up to the 18th green, I looked over my shoulder. Then I knew. Holy cow, this is happening, this is really going to happen! It was surreal.” Two putts later the thousand-pound weight had been lifted.

“It was a magical week,” her father said.

“We were just happy she was able to play golf again,” said her mother, Karen. “To win was an unbelievable bonus.”

Creamer’s total of three-under-par 281 was eight strokes better than Cabrera’s winning score. “Winning at Oakmont was awesome,” she said at the end of our talk. “If there’s one course you’d want to win a major on, that’s the one. It gives me goose bumps just thinking about it.”

She said she keeps only one trophy in her Isleworth home—the hardware she won for taming the beast.