U.S. Open, beware: Brian Harman is scrappy, confident and ready for this moment

ERIN, Wis. — Brian Harman’s father is a dentist in Savannah, Ga. The father is not good at golf. I know this because Brian Harman told me that and I don’t think he would misrepresent his father’s golf game. Brian Harman is good at golf. We all know that. Through three rounds of this U.S. Open at Erin Hills he’s our leader.

I spoke to him at length on June 4, the Sunday of the Memorial tournament, at Erin Hills. He and Dustin Johnson, after missing the cut at the Memorial, flew in a private plane from Columbus to a small airport about 30 minutes from the golf course, had dinner in the clubhouse, where they spent the night before playing 18 holes on Sunday, with Billy Horschel and Jim Furyk. I followed them around for about four holes and it was interesting to see Brian trying to fit in with the others. Yes, all four are tour winners, but Horschel has a natural swagger, Johnson is likely playing his way into the Hall of Fame and Furyk is a modern legend, for the length of his career, the money he has won and his funky swing. Harman struck me as the kid you knew in high school — short, not cool, trying to fit in. The kid who has something to prove. Watch out for that kid, always. You want to hire the prep-school kid who went to Yale on his grandmother’s inheritance or some scrapper who paid his way through Michigan State working a night job? At Erin Hills, we talked some about the course and it was clear that he had a very sophisticated understanding of its strengths and weaknesses. He liked it. He didn’t like its moments where there were few if any options to play it, but overall he liked it. He wasn’t a fussy country-club kid, at all. His first love, he told me, was baseball.

When the Walker Cup was at Merion in 2009, Harman was on the team. A caddie once told me that Harman holed out an impossible greenside pitch, took off his hat, half-bowed to the crowd and said, “Brian Harman, ladies and gentleman. Brian Harman.” I relayed that highlight reel to Harman. He didn’t confirm or deny. He smiled.

Later, he was practicing in the spectacular Erin Hills driving range. I word it that way because he was the only person around and he went out into the middle of it, carrying his own staff bag and started hitting balls into a headwind. He was hitting shots fast, one after another, just grooving a very athletic swing. We chatted while he hit balls and later while he putted. 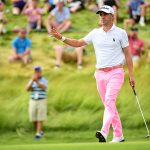 You may also like Thomas’s 63 stole the show, but Brian Harman leads U.S. Open after a thrilling Saturday

”I was good in high school, good at times at Georgia, but sometime after turning pro I lost my confidence,” he said. This is from my memory but I assure you pretty close. “It wasn’t like I lost my swing, but my confidence. And it’s taken me a long time to get it back. And I feel like I have.”

We talked about his win in May at the Wells Fargo Championship. He said he was “only” 20 yards shorter than Jon Rahm. He talked about growing up watching Tiger play. He said, “Tiger has nothing left to prove. He’s the best.”

Brian Harman has something to prove.