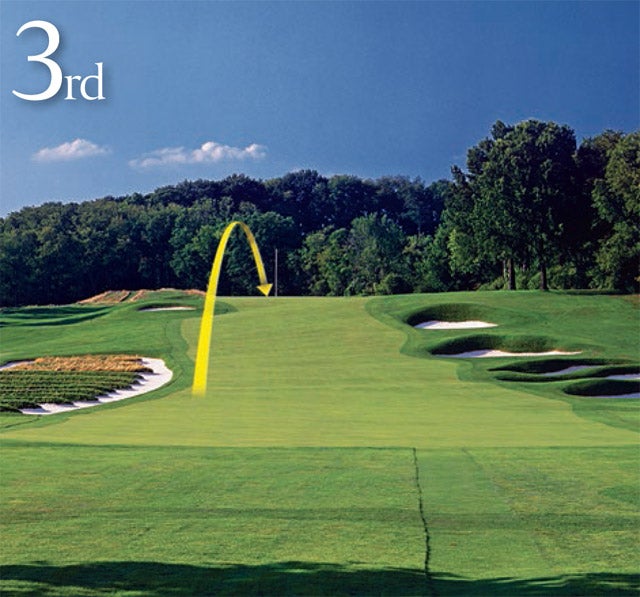 How tough is Oakmont? Johnny Miller called it the “most difficult test of golf in America.” Gene Sarazen said it has “all the charm of a sock to the head.” And both those guys won majors there. Club founder Henry Fownes issued this warning: “Let the clumsy, the spineless, the alibi artist stand aside.” What is it about the course that backs up that kind of talk? Its main defense is a medley of slick, wildly contoured greens, which are bolstered by thick, tangled rough, ditches along the fairways and, not least, some 200 bunkers. “A shot poorly played,” Fownes growled, “should be a shot irrevocably lost.”

With that in mind, we identified five of Oakmont’s toughest shots—the true stomach-churners—and sought advice from six pros-in-the-know about how to play them. We also asked our course-ranking editor—”Average” Joe Passov, a 10-handicapper—to tackle them to give you a better sense of how these shots set up for players like you. His take? “They were like a sock to the head, a punch to the gut and kick in the shins, all at once.”

Fear factor: From behind the green, one of Oakmont’s wildest putting surfaces races away from back to front and right to left, making it all but impossible to stop the ball close from the sand.

How the pros should play it: “You need maximum height and a soft touch, so take the club back longer and slower than normal and add loft as you hit. Try to nip it for the extra spin. If you hit it fat, it will run a lot more. Don’t get cute, as you’ll wind up decelerating and leaving the ball short. Sometimes 15 to 20 feet by the hole is OK. Take your bogey and be happy.” – Gary Player, who has three top-20 finishes in Oakmont U.S. Opens

Average Joe: “I managed to avoid the back bunker and still made 7. For fun, I went back and hit three shots from that pit to a front-right hole location. Each came out soft, but none stayed on the green.” Fear factor: Following your first encounter with the Church Pews, you must land your uphill approach within a 10-foot circle around the hole just to keep it on the green. A steep fall-off in front and another in back, bunkers short right and a green that tilts left to right all spell trouble.

How the pros should play it: “You’ll see some birdies here, but the third is not one of those holes that you can attack, especially when the hole is up front, which is [as small as] the hood of a car. You don’t want to be short, but weighing on your mind is going too long, where you have one of those near-impossible downhill putts.” – Larry Nelson, 1983 U.S. Open winner at Oakmont

Average Joe: “I pinched a nifty wedge from 90 yards (my third shot), but it landed just beyond the 10-foot zone and trundled into a shaved-down hollow. My first chip wound up back at my feet, paving the way for a second consecutive triple bogey.”

Fear factor: Um, it’s a 288-yard par 3. It also has an enormous, three-puttable green, a swarm of greenside sand and a sinuous ditch that hugs the left side of the hole and wraps around the back of the green.

How the pros should play it: “The shot is tough because it’s almost a 300-yard par 3 and there is a cross-bunker and bunkers left and right of the green. A lot of the guys will be hitting driver and they still need to keep the ball on the right side of the pin or they will have a very difficult two-putt. The best strategy is to hit a draw and chase the ball up on the green.” – Hank Kuehne, 1998 U.S. Amateur champion and a frequent Oakmont visitor

Average Joe: “My 3-wood from 225 yards found a right-side bunker. Two sand shots and two putts later, I limped toward the Pennsylvania Turnpike with a double-bogey 5.”

Fear factor: The entrance to the green is open, but the unusual putting surface plunges front-to-back and left-to-right. The nightmare hole location is middle of the green, left side. Simple-looking chip shots can zip past the hole and off the green.

How the pros should play it: “The unique thing about No. 12 is that you rarely get a green that slopes so severely away from you. Therefore, it is absolutely crucial to be in the fairway when you approach so that you can spin the ball. The key here is to get a feel for how far the ball will release when it lands.” – Fred Funk, eight-time winner on the PGA Tour, who tied for 44th at the 1994 U.S. Open at Oakmont

Average Joe: “My 9-iron punch from 110 yards, though crisply hit, lacked the juice to keep it up top and it trickled down the length of the green before dribbling off. Another bogey followed.”

Fear factor: OB on the right, deep bunkers on both sides pinching the landing area and dense rough. The good news for Phil Mickelson: no trees left!

How the pros should play it: “It’s a classic U.S. Open tee shot, looking at the clubhouse, hitting down to a fairway that climbs back up. Everything pitches to the right. Drawing it is the best way to hold the fairway, and it’s critical to finish in the short stuff because there’s a quasi-cross-bunker up ahead.” – Brad Faxon, eight-time PGA Tour winner and low amateur at the 1983 U.S. Open at Oakmont

Average Joe: “Feeling pressure to break 100, I slotted a drive between the bunkers, then scooted a skinny 3-wood to the front apron, 30 feet below the hole. I three-jacked for bogey, just as Larry Nelson did at the 72nd hole in the 1983 U.S. Open. Nelson shot 67; I shot 96.”