U.S. Open 2016: Tee Times and Weather for Friday at Oakmont 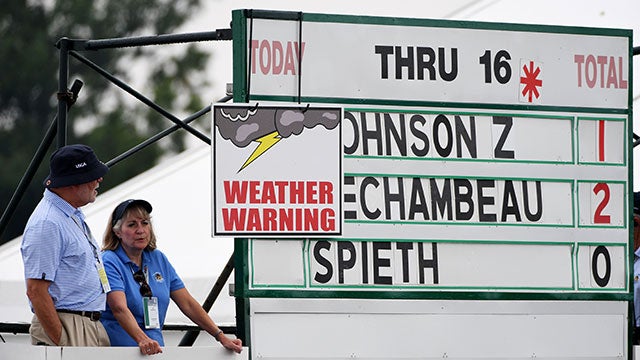 A weather delay sign is seen on the leader board during the first round of the U.S. Open at Oakmont Country Club on June 16, 2016 in Oakmont, Pennsylvania.
Getty Images

A much-hyped U.S. Open was waterlogged on Thursday, marred by heavy rains, intense lightning and three weather delays. The USGA eventually suspended play for the rest of the day at 3:30 p.m. with only nine players of the 156-man field having completed their first round. This will lead to some tricky scheduling in terms of tee times for the rest of the tournament.

The heavy rains appear to have moved out of the area, and the sun was beaming down on Oakmont late Thursday night. The forecast for Friday should be relatively clear, and if there are no more stoppages Friday, players are in for a long three days of golf.

MORE: Round 1 Marred By Weather Means a Busy Friday Is on the Way

On Thursday, the USGA split the field into morning and afternoon waves while having groups tee off on hole Nos. 1 and 10. The majority of the morning wave was able to get to their back nines for Round 1, and those players will come out early on Friday morning to resume on the hole they left off on. Then the afternoon wave will tee off for their first round not far behind. A restart begins at 7:30 a.m. (45 minutes after the first tee time set for Thursday) and the last of the afternoon wave will likely tee off later that morning and finish their first round in the early afternoon. Those players in the afternoon wave would then be trotted back out to start their second round after a short break. That would mean very few players in the morning wave would have much chance to complete any, much less all of, their second round.

All of that to say, there will be a lot of golf crammed into Friday, and a soggy Oakmont could be ripe for birdies.

For all of GOLF.com’s U.S. Open coverage, check out our tournament hub page.