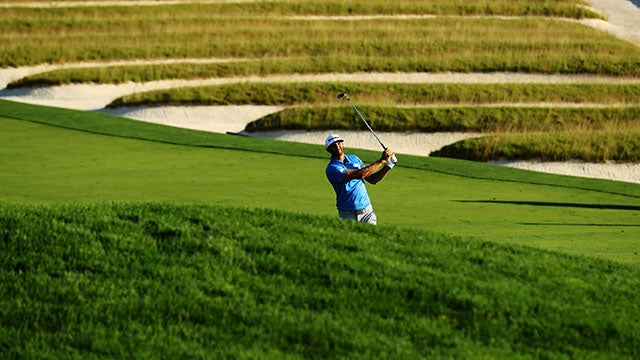 Dustin Johnson hits his second shot on the third hole during the second round of the U.S. Open at Oakmont Country Club on June 17, 2016 in Oakmont, Pennsylvania.
Getty Images

OAKMONT, Pa.—A reminder about who’s the boss here at the United States Open.

Oakmont is The Boss.

If someone was going to shoot a low score at Mighty Oakmont or maybe even make a heretical run at Johnny Miller’s famed 63, Friday was the day to do it. But you’d get better odds by buying a PowerBall ticket, and you’d be more likely to win at blackjack in Las Vegas if your lucky number was 23. Oakmont stood up Friday to the U.S. Open competitors, who were mostly from the Thursday afternoon half of the field, and said, “Not today, boys.” The course probably threw an expletive in there, too, just for dramatic effect.

Oakmont stood up to the test even though there were three play stoppages due to storms Thursday; multiple deluges into the night; some lightning and thunder courtesy of special effects; and budding new water hazards on a course that famously doesn’t have any water hazards. With greens and fairways softened to the texture of yogurt, Friday should have been a good day for scoring. Shots into the greens should’ve been as easy as throwing lawn darts.

“It’s still brutal out there,” said Danny Lee, who shot 71 after finishing up his first round Friday morning. “I see high numbers out there. If you play four rounds, you’re going to have one brutal round and you’ve just got to grind. There are some tight fairways and the wind makes that even tougher. If you miss a fairway, there’s just no way out.”

Oh, it was a little gusty into the mid-afternoon. Grandstand flags flapped lightly in a steady breeze that faded as the afternoon wore on. By early evening, they hung limply. Pass the red numbers, please.

The famous first-round leader Andrew Landry played only one stroke Friday, holing a birdie putt on the 9th green to complete his round. He didn’t play any more holes today, but Oakmont held up so well in what would be take-it-low scoring conditions at almost any other course, that no one was able to pass him. Dustin Johnson tied Landry at four under par on two occasions, but Oakmont held fast.

Daniel Summerhays did light it up Friday with seven birdies in a round of 65, five under, providing the necessary exception to the rule, but few other players made moves in the right direction. It’s a fact on the PGA Tour that with soft greens a field will tear even the toughest course to pieces. Wind is really the only defense against the world’s best players. Tough greens slow them down a bit unless they’re abominably difficult — Augusta National is the only example that comes to mind — but low scores are still common.

Witness Jack’s place, Muirfield Village, which is tougher than an Armenian wrestler yet yields stunningly low scores at the Memorial. The last four winning tallies were, in order, 12 under, 13 under, 15 under and 15 under. That course is not that easy.

Neither is Oakmont, where the greens are the primary defense. They’re every bit as fast and sloped as Augusta National. (Phil Mickelson said earlier in the week that they’re harder to putt than Augusta’s.) And just to make sure they were super-slick, the grounds crew double-cut and rolled the putting surfaces between Friday’s sessions. The Thursday afternoon wave of players, which never got to tee off on Thursday, finished one 18-hole round, had a quick break and rolled right into the second round in the afternoon.

Then there is the rough. It’s not as deep as in past Oakmont Opens, but it’s been a wet spring-early summer, just enough to keep the grass thick, lush and grabby. It’s worse than it looks, and the results showed it. On Friday, when the Oakmont field should have been laying waste to the birdie record, it backed up instead.

Here’s an example, which I noticed because of the obvious vested interest. Mike Van Sickle, my son, shot 76 in Thursday’s storms in the second group out and was in 100th place by the time the afternoon wave finished up mid-day Friday. By Friday evening, without hitting a shot, he had vaulted into the mid-70s, position-wise. The top 60 and ties make the cut.

“The conditions dictated everything,” Scott Piercy said after he shot 68 in the first round and was headed back out for a second 18. “The different wind, the soft of the fairways, the softness of the greens—they dictated everything. I was going to hit a lot of 4-irons off tees and let it roll out and I ended up hitting drivers on some of those holes. You couldn’t get it that far down the fairway anymore because the ball wasn’t rolling 50 yards, it was backing up one foot.”

Of the 78 players who didn’t tee off until Friday, only five were in red numbers by day’s end. On a day when scoring at Oakmont was as easy as it has ever been, or probably will ever be.

Piercy, 37, is a big hitter who’s quietly had a solid career—three victories, $12 million in earnings. He’s a Las Vegas native who led his high school to two state soccer championships and who played college golf at San Diego State University. He battled his way through a doubleheader Friday and finished at two under par. It was a good day, just not an easy one. There is no such thing at Oakmont.

“It was a challenge for us today,” Piercy said. “It’s 36 holes on this golf course. You don’t really wish that on anybody.”