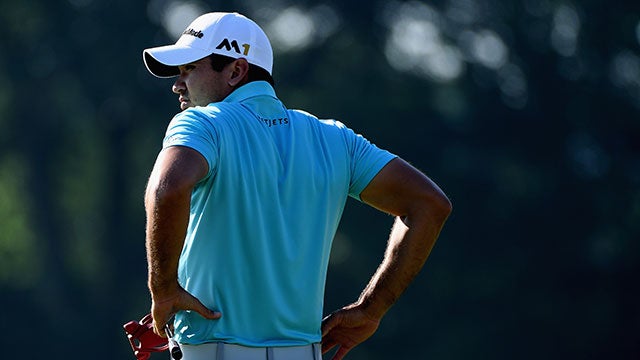 Jason Day thrust himself into contention for Sunday at the U.S. Open after a birdie filled third round at Oakmont.
Getty Images

OAKMONT, Pa – Jason Day’s putt skidded by the hole, without even a passing fancy of going in, and he received something he’s not used to: sympathy claps.

That was Friday, when Day battled to a one-under finish despite watching putt after putt breeze past the cup. Another fairway hit. Another green. Another birdie gone begging.

He went through his pre-shot routine, as deliberate as it is unique, visualizing the shot with his eyes fluttering. Casual observers might call it trance-like.

But his visions weren’t materializing.

As he strolled down to the first tee, nine holes into his second round, the sunlight sizzling golden and the tournament getting away from him, Day heard the crowds urging him on.

The Oakmont galleries – if they were Game of Thrones characters, they’d be Iron Born in the Steel City — could feel the best player in the world pressing. They were pushing him to fight through.

“My mindset on the first day was a little — I just felt clouded like I wasn’t sure of the clubs I was hitting,” Day would say. Then Saturday happened. The No. 1 player in the world watched the morning wave play 18 holes while unsure if he’d make the cut.

When Day finally arrived on the 10th tee at Oakmont to begin his third round, he was 9 shots behind leader Dustin Johnson.

When he stood on the 15th tee, Day was just 5 back after going birdie, par, birdie, birdie, birdie to move to one over for the tournament as his red “-4” blared on the manual scoreboards.

A statement had been made: even on the hardest course in the country, with the simmering pressure of the U.S. Open, Jason Day was never out of it.

Dustin Johnson was leaking oil, Lee Westwood has history of major-championship shakiness and Andrew Landry is – wait who?

Standing in the fairway on the par-5 4th, Day couldn’t see the flag, but decided to play aggressively. He stood behind his ball, shimmied his shoulders, settled in and pured a 4-iron from 260 yards out. It settled within 15 feet of the hole.

2016 U.S. Open Hub: Everything You Need From Oakmont

He buried the side-winding, downhill putt for eagle, and gave a quick wave to the crowd. He was in the zone. Whispers of a possible 63 — or even 62 — began to percolate.

History will have to wait. Day made one bogey coming in and no more birdies to finish with a four-under 66, matching Branden Grace for lowest third-round score.  Day is tied for eighth, but the names above him on the leaderboard have combined to win zero majors.

“I just feel like if I can just put my name up there up on the scoreboard, hopefully they’ll slow down a little bit,” Day said. “I tend to watch the scoreboard a lot. I pretty much watched the scoreboard the whole day. Just seeing those guys just makes me want to chase that score a little bit more. You know obviously to a certain degree where you have to be patient, but I was holing some good putts out there and had some momentum on my side.”

Unlike the players he’s chasing, Day was able to complete his third round, an advantage that wasn’t lost on him.

As he strutted up the brutally difficult par-4 9th, he exclaimed, to no one in particular, “I’m so glad we’re going to finish.”

Shane Lowry, the current leader (five under), will play 22 holes tomorrow in conditions that are unlikely to be any easier than they were on Saturday.

“The harder the better, like a normal U.S. Open should be. I think it’ll be fun for everyone,” Day said.

After an extraordinary third round, Day just might have a blast on Sunday.