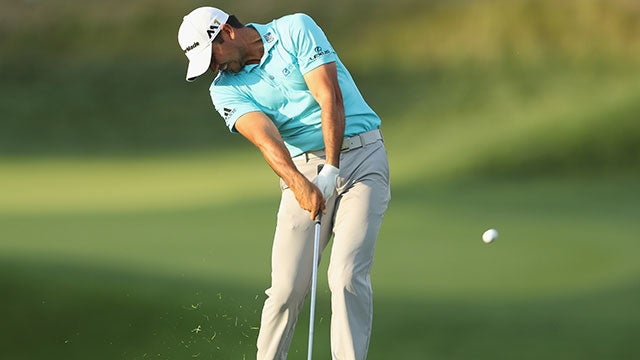 Jason Day of Australia plays a shot on the seventh hole during the third round of the U.S. Open at Oakmont Country Club on June 18, 2016 in Oakmont, Pennsylvania.
Getty Images

UPDATE: Early Sunday morning, players returned to Oakmont to complete the third round. Shane Lowry picked up where he left off Saturday, carding birdies on the 15th and 17th holes to climb to seven under for the tournament. That’s good enough for a four-shot lead over Dustin Johnson and Andrew Landry, who are three under. Sergio Garcia had a disappointing morning, dropping two shots with back-to-back bogeys. He’ll start the final round at even par, seven back of Lowry.

OAKMONT, Pa. — The game’s giants have always risen to the occasion when the U.S. Open visits Oakmont.

So is this week some kind of prank or what?

We’re looking at you, Shane Lowry, Andrew Landry, Scott Piercy, Dustin Johnson, Daniel Summerhays, Lee Westwood, Sergio Garcia and Branden Grace. When third-round play stopped Saturday just after 8:45 p.m. with the last group through 13 holes, Lowry, the bearded Irishman, had the lead at five under par, two ahead of Landry and one ahead of Westwood, Garcia and Johnson.

Those five players, plus Grace (-1), are the only players still under par for the week.

This U.S. Open has been a wild ride, dating back to Thursday when assorted thunderstorms stopped play three times. The nuttiness will extend to Sunday morning when the leaders will return to the course to complete their third rounds. Maybe these contenders are not-ready-for-prime-time-legends. Or maybe they will be if they’re still on the leaderboard late on Sunday. This Open has made no sense. Rory McIlroy, Justin Rose, Rickie Fowler and Phil Mickelson missed the cut. Jordan Spieth couldn’t get into contention. And Jason Day, your world No. 1, clawed his way back into the picture Saturday afternoon when he channeled his inner Johnny Miller and broke from the gates with four birdies in the first five holes. But he’s still six back.

The big question after another marathon golf session Saturday: Can anybody here win this thing?

No offense, gents, but this is not exactly golf’s version of Murderer’s Row. Day is the only player on the leaderboard’s first page who has won a major. Majors-wise, everyone else look like golf’s version of The 40-Year-Old Virgin.

Let’s start with Johnson, who was never going to run away with this thing no matter how good he looked Friday. Johnson, again, had his moments of awe during Saturday afternoon’s unfinished third round. He looked unflinching with a way-too-easy birdie at the opening hole. At the short par-4 2nd, he popped a deft chip from an awkward stance near the bunker and left it hanging on the lip. Nice par save.

At the 3rd, DJ bombed a massive drive beyond the Church Pews bunker in the left rough and left his approach shot on the false front of the green. It rolled back down the fairway. His pitch-and-run attempt from there delivered the ball to about the same spot, and it rolled back again. This is how you make double bogey at no. 3, and he did.

Fazed? Not the unflinching Johnson. He powered a long drive on the par-5 4th, hit iron to just short of the green and his putt drifted just beyond the hole for another short birdie. It was as easy as it was awe-inducing.

So which DJ is going to show up on Sunday? No one knows. And which pursuer is going to stay in the hunt until the bitter end. Garcia? After he pushed a few putts to the right when it mattered, he disappeared from the telecast.

The little-known Landry, the 28-year-old Texan who’s been playing mini-tours but told his dad last week that he was going to win this Open? Stop snickering, he looks as tough as anyone out there… so far. Lowry? He’s streaky good, among the world’s most underrated players. Bourdy, the Frenchman? Westwood? Branden Grace, who stumbled at the end of last year’s Open?

And who’s that sneaking up on the outside? Is that Day, the best putter still within range and therefore the most dangerous threat? Can he back up his afternoon 66 with another? Will finishing his third round and being able to sleep in Sunday morning prove to be the advantage that wins him an Open?

There are no correct answers for these questions, kids, so grade yourself on a favorable curve. You deserve it.

Saturday was yet another double-round day as the play remained backed up from Thursday’s delays. Scoring conditions were optimal all day and some took advantage in the morning.

Bourdy, 34, is a Frenchman who has four European tour victories but none since the 2013 Wales Open. He went on a scintillating run in warm, windless conditions. Bourdy was six under par after back-to-back birdies at 13 and 14 and had a chance to get to seven under and tie Miller’s timeless mark, but he bogeyed the par-3 16th and doubled the troublesome 18th. C’est la vie.

“It was a beautiful golf and I knew at the beginning of this week, I could do something well,” Bourdy said. “I feel very good in my game the last few weeks, and I really love the difficulty of this course. I can play some great tee shots, good irons. I holed some putts as well, so A-plus.”

Bourdy’s magic wore thin in the afternoon round as he shot a two-over 37 on the front and slid back.

Landry, 28, is a former All-American at Arkansas making his first start in a major championship. He held the first-round Open lead after a 66 and appeared to vanish the way little-known first-round leaders are supposed to do when he went bogey, bogey, double bogey starting at the 6th hole. Landry didn’t disappear, though. Instead, he gamely fought back with a birdie at the par-3 13th and a birdie-birdie finish for 71. Seven pars on the front nine in the afternoon kept him in the thick of things.

“I hit some really good shots coming in,” he said after the morning finish. “This golf course suits me very well. I can play my game. I’m not the player who’s going to go out and shoot 28 under par, I’m the guy who kind of just dinks it around, makes pars and throws in a couple birdies.” Landry and the others caught Oakmont on a good scoring day. Maybe if the greens get firmer and scoring gets more difficult, the names on the leaderboard will change. A score off par could win this thing.

“I told friends and family that maybe five to seven over par would win this golf tournament,” Landry said. “I did not think that the rain would make this course that soft. It’s definitely scorable now. Some holes, not all holes. If you get the ball on the fairway, you can really take advantage of some good opportunities.

“Obviously, there’s plenty of golf to be played,” added Day, whose back-nine 31 was a major attention-getter.

Strange things have been happening at Oakmont. They may continue to happen.