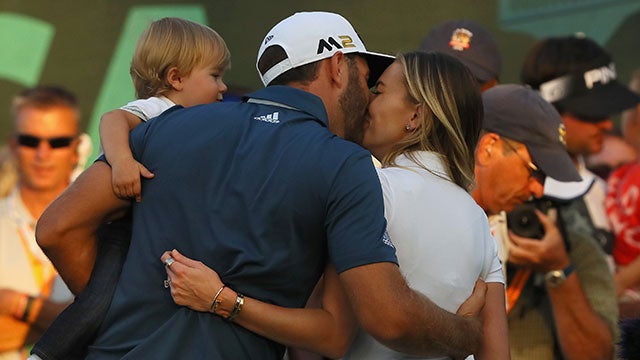 Dustin Johnson of the United States celebrates with partner Paulina Gretzky and son Tatum after winning the U.S. Open at Oakmont Country Club on June 19, 2016 in Oakmont, Pennsylvania.
Getty Images

The winners of the Miss America Pageant make this solemn promise: “I will conduct myself at all times with dignity, grace and good manners whenever I am wearing my crown and/or sash. This includes postings on social media.” Well, the winner of the most demanding championship in all of golf must do about the same. If Woods and Johnson had a texting relationship (and nothing indicates they do), the 14-time major winner might send this message: Welcome to the club, dude.

Johnson, who is 31, will find, as Fred Couples did after his it-stayed-dry tee shot on 12 in the final round of the 1992 Masters, that people will ask him about the USGA’s decision to assess him a one-stroke penalty for years and decades to come. The questions will bore and frustrate him—they did Sunday night—just as the questions about his failed drug tests and six-month forced leave from the Tour in 2014 and 2015 do. But he will have to dig deep into his tremendous reservoir of cool and handle it all with dignity, grace and good manners.

Here’s hoping he will. And if Johnson can’t figure out how to do it himself, Wayne Gretzky, who is the grandfather of his son, can likely help him down that path. Johnson is at the table with all the other grown-ups now. Jack Nicklaus himself, the ultimate example of golf decorum, on and off the course, placed the winner’s medal around Johnson’s neck Sunday night. Nicklaus’s eyes were welling as he stood on that XXL home green, where Arnold Palmer shook his hand so manfully after Nicklaus defeated him in a playoff in ’62. In some ways, it seemed inevitable that Johnson would someday win a U.S. Open, just as it seems inevitable that he will someday win a Masters. Why? Because of his off-the-chart physical gifts. He is not close to the putter Jordan Spieth is, and he certainly doesn’t pitch the ball nearly as well as Woods did in his prime, but in terms of having all the shots, and an almost unlimited reserve of power, he’s ahead of everybody in the game except Rory McIlroy. But all the while, it was also easy to make the case that he would never win of golf’s great championships because he did not have enough willpower, because he did not care enough, because he did not want all the responsibilities that come with winning. But now we know. We know because he did it. He closed.

This 116th U.S. Open, the ninth one held at Oakmont, was really a one-day tournament, for everybody but for Johnson especially. Thursday and Friday (when Johnson played 36 holes) and Saturday were all out of rhythm, owing to Thursday’s downpours and frightening electrical storms. Three days of stops and starts. But the Sunday afternoon play, and its accompanying oddness, made up for all that.

Johnson’s 68, downgraded to a 69 by the USGA because of the fifth-hole rules debacle, was absolutely air-tight. It was the kind of round that Big Jack Nicklaus would surely recognize because it was so, so sound.

But this championship, maybe unfairly, will be better remembered for what happened while Johnson stood over a three-foot putt. The USGA’s job is to make the right rules decision using all available information. Johnson’s ball moved. He said he didn’t cause it to move, and that should have been the end of the discussion, as respect for the word and the integrity of the player is a fundamental of the game. But the USGA rules officials decided to look at it another way, which is essentially this: Well, if you didn’t cause the ball to move, then what did? And, when you cut through all the polite rhetoric on both sides, they said, in making the decision to add a stroke to Johnson’s card, they rejected Johnson’s own interpretation of what happened. The golfer’s own testimony was overruled. It almost never happens. The foundation of the game is that the player is to be believed, that the player understands the rules and that there is no reason to question his or her judgment. If that is changing the game is changing. Sunday’s dispute suggests it is changing.

You can’t have a U.S. Open winner at odds with the organization that puts on the championship, although that is, in the end, what has happened here. The modern players, to generalize, are ambivalent about the USGA in ways that the players from earlier eras were not. Palmer and Nicklaus and Ben Hogan were ambassadors of the USGA. Johnson, chewing Skoal Apple Long Cut all through his round and spitting tobacco juice on the fabled links, is not exactly the second coming of Ben Hogan. He’s a guy who is immensely talented at golf and not particularly comfortable talking about his talents or even himself. It is safe to say that the U.S. Open has never been won by anyone like him. People will be talking about Dustin Johnson for the rest of his life.