Public golf as a singleton on a course that is new to you is a crapshoot. You don’t know what the course will be like, how bad (always bad) the wait will be, and you certainly don’t know who you will be paired with. Still, we go, right? We’re optimists, we golfers. It’s in our tribal DNA.

I called it a day (using loosely this work-whistle phrase) at about 4 p.m. on Wednesday — pro-am day at the Arnold Palmer Invitational presented by MasterCard! — and slipped out to the 1914 public nine-hole course in tony Winter Park. My friend Damon Hack (cheerful early-morn Golf Channel personality) has told me about its unique charms over the years, and this week the globe-trotting golf-travel writer Dove Jones has been doing the same. Off I went.

O.K.: It was love at first sight. The course is right in town. Small parking lot. Small pro shop. Smallish scorecard. Nonresident green fee of $16. A handsome book on the counter about the best nine-hole courses in the United States and Canada. The Finest Nines has a serious omission — my nine-holer, at home in Philadelphia — but its very existence tells you something about how crazed we tribe members are. I propose a book about the best six-holers. (Davis Love has a whole list of them.) The nine-holer in Edgartown, Mass., a course where I have a happy memory on every hole, is in the book. So, naturally, is Winter Park.

Right there in the pro shop, the WP9 (the logo on my new hat) was getting high marks for atmospherics. Not that I am in the golf-course judging business. My thing is, How do you feel when you’re done for the day? If the round is five hours of cart-golf trapped with three dotards, then I don’t care how good the course and its “signature hole” is. You can have it. [image:14095035]

Fifteen minutes after paying my green fee I was on the first tee with my assigned playing partners, two thirtysomething guys, Caleb and Nate, regular golf partners. We stared down the fierce opener at Winter Park. I jest. The first at Winter Park is a 225-yard hole that would be ruined if the card called it a par-3, but of course it is a 1914 par-4 and that, borrowing from the poet, made (makes) all the difference. I played it with a 6-iron and a sand wedge and my out-of-the-carpark bogey 5 brought me no shame.

You could go sledding on that first Winter Park green, recently rebuilt from scratch by Keith Rhebb, who has logged many long days on a bulldozer in the company of Bill Coore and Ben Crenshaw, and a young Canadian designer named Riley Johns. The course looks old and is old. The greens, all of them, look old but they are not. The bunkers, too. They have lips and shape and character, but they will not ruin your day, not if you take enough sand.

I’m not going to take you through the whole nine, except to say that there are nine good dead-flat holes. The shortest is about 130 yards, the longest is about 490 and you can play the course in 90 minutes, easily. On your way out and home, you play by a cemetery, an active train track, an 18-hole putting course and many handsome Old South homes. There are no O.B. stakes. The public roads that line some of the holes tell you when you are off-property.

My goal for the par-4 430-yard 3rd hole was to play it with one ball. (That’s my goal on every hole.) I hit an iron off the tee, a layup iron second shot and a pulled third iron shot that landed on a greenside slope and, Pinehurst No. 2 style, rolled off the course and eventually on to New York Avenue. Note to the USGA police: I dropped where it went out, ADDED ONE SHOT TO MY SCORE, and wrote down 7 on my card. Nobody will add two in those situations, and nobody should, despite what the new and kinder USGA is telling us to do. The world would be better if all white stakes were painted red.

Let’s return to the action. It was on the third hole that I started to focus on my playing partners. One of them, Nate Capshaw, a youth counselor at Celebration Church in Orlando, is newish to golf, but his golf on that hole was astounding. Playing out of a push cart and in black cotton sweat pants that you could sleep in, he hit a 230-yard push-fade into a stand of trees stage right. From there, he hit a low, fading punch-shot iron that missed every tree, curled its way up the green and finished about six feet from the hole. How amazing is golf? Here’s a 15-handicapper who had just played a shot that any touring professional would have been proud to play. As my old boss on the European tour Peter Teravainen used to say, “Good shots must come in groups of two.” Nate did just that. Birdie three! 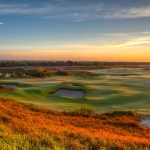 You may also like The ultimate golfer’s guide to Florida, from A to Z

Caleb Douglass, Nate’s friend, also works at Celebration Church, as a musician. He plays guitar, drums and sings. (Two of his musical influences are the country singer Brent Cobb and the alt-folk band The Lumineers.) He’s a small guy, completely self-taught, and he swings like Rickie Fowler, kind of flat, with beautiful rhythm and balance. I was not surprised to learn that he was a good wrestler and baseball player growing up in a small town in western Pennsylvania. He had two serious bouts of juvenile cancer which claimed a kidney but not his eye-hand coordination. He told me he can break 80 on a good day on a hard course and you can absolutely believe that. He learned the game at a nine-holer in Sharon, Pa., called the Buhl Farm Golf Course. It didn’t make the Finest Nines book but, as Caleb noted, the price was (and is) right. It’s free. Caleb played some beautiful shots. He and Nate knew the course well. [image:14094928]

On the 9th hole, Caleb told me that this would be his last round for at least three months. The following day, he and his wife, Rachel, were going to Lagos, Nigeria, to adopt a four-year-old Nigerian girl. How amazing is that and how amazing is this game of golf and its ability to throw you into the company of people you might otherwise never meet! The laws of international adoption are complicated and among other things there is in Nigeria a required three-month supervised bonding period between the child and the child’s new parents. Caleb’s church community is helping with the hotel and flight expenses, but the whole process is still daunting and expensive. Caleb seemed ready for the challenge. Five years into marriage, the Douglesses will become a threesome.

I asked Caleb if he had had seen a photograph of his soon-to-be-daughter. He had. “She’s beautiful,” he said.

Caleb used to clean pools at Bay Hill and marveled at how the course blossomed for the week of the tournament, like a swimmer tapering for nationals. On the Thursday of the Arnold Palmer Invitational, Caleb and Rachel would be beginning their long journey. Orlando to Newark, Newark to Paris, Paris to Lagos with a stop in Ethiopia. And that’s just the physical part of it.

My playing partner told me that there was golf in Lagos but that he knew he would not be playing. After holing out on nine, I saw the course manager hauling trash out of his pro shop. There was a little kid and his father chipping in the vicinity of the first tee. Caleb holed a short putt for par on the last and headed off. He said he looks forward to introducing golf to his daughter, right there, at the nine-holer in Winter Park.