Tour Confidential Daily: Who will win the Masters? Our staff predicts the final round

Francesco Molinari is your 54-hole Masters leader, but Tiger Woods and Tony Finau — who are in the final group with Molinari — are both two behind, while Brooks Koepka lurks just three back of the lead. There’s also a handful of other proven pros within four and five shots of Molinari. Who will come out on top and win the Masters on Sunday at Augusta National Golf Club?

Sean Zak, associate editor (@sean_zak): The difference between Tiger and Frankie Molinari is that Tiger makes mistakes. Francesco in green!

Luke Kerr-Dineen, instruction editor (@LukeKerrDineen): Franco Molinari has been the best, most consistent player in golf since last summer, and he goes about his business with such assuredness. His consistency is remarkable — he’s only made one bogey all week — and his icy focus will suck the life out of that final group. He’s golf’s version of a White Walker, and winter will come for all on Sunday at Augusta National.

Jonathan Wall, equipment editor (@jonathanrwall): Frankie Molinari has looked nearly unbeatable when he’s in contention. Tiger’s going to need to play a flawless round of golf to catch him, and we haven’t seen him produce one of those this week. 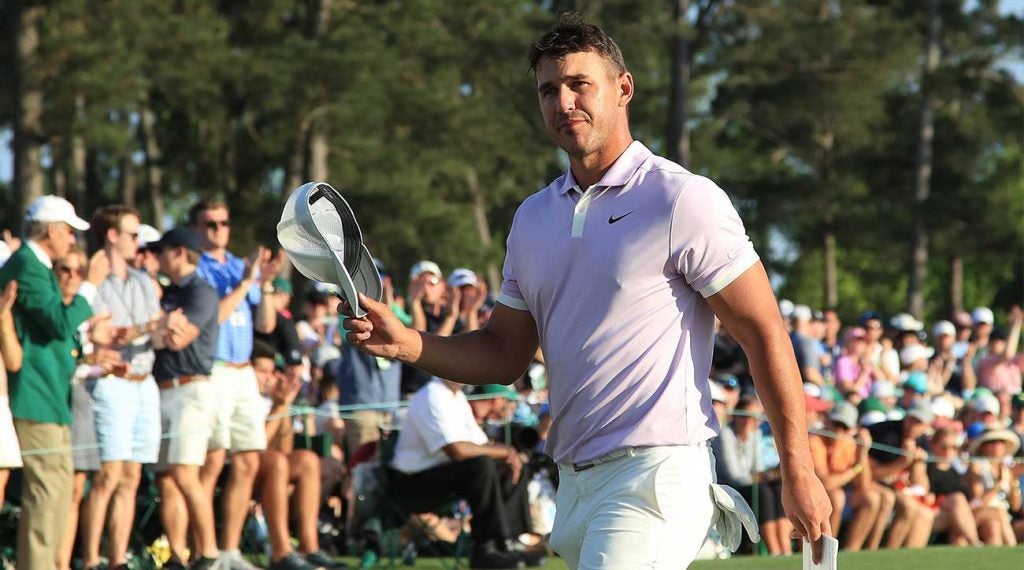 Brooks Koepka walks off the green after his Masters round on Saturday. Koepka is three off the lead with 18 holes to play.
Getty Images

Jeff Ritter, digital development editor (@Jeff_Ritter): Sure, Molinari is the favorite, but rocky weather could really shake things up. It’s possible that 11 or 12 under is enough to get it done. That’s all it’ll take for the most unflappable competitor in the field: Brooks Koepka. I’m done overlooking him.

Jessica Marksbury, multimedia editor (@Jess_Marksbury): C’mon guys, are you really giving up on Tiger now?! I too am impressed by Francesco’s consistency, but the fact that he hasn’t made a big mistake yet makes me feel like he’s due. Two shots is NOTHIN’ on Masters Sunday. And when is the last time any of these guys have had to face Tiger in the final group of a major on a Sunday? The roars are going to be unbelievable, and all in Tiger’s favor. Tiger’s gotten better and better all week and he’s STILL left some shots out there. Given what’s at stake tomorrow, I fully expect the Big Cat to rise to the occasion.

Josh Sens, contributor (@JoshSens): So, no one thinks Adam Scott is going to successfully petition for a reinstatement of anchoring and shoot 59 to win? Molinari is not going to give this away. Someone is going to have to snatch it from him. Koepka seems like the most likely candidate. He played middling rounds these last two days and is still within striking distance. But to answer the question. Molinari wins, with Koepka breathing down his neck.

Dylan Dethier, associate editor (@Dylan_Dethier): I’ve said Tiger Woods every day in this space, and nothing I saw today has shaken me from that belief. Granted, I’d rather not spot Francesco two shots on Sunday, but he can’t go on forever without a bogey, can he? (Narrator: He probably can.) Woods has been vintage — good with his irons and was rock-solid with his putter today; he basically game-managed his way to a 67. A lot of things are going to happen tomorrow, and I still like TW’s chances.

Josh Berhow, senior editor (@Josh_Berhow): Molinari was my pick to win before the tournament even started. I’m not turning my back on him now. The guy has been nails.

Alan Bastable, executive editor (@alan_bastable): Billy Payne wasn’t still chairman here the last time Moli made a bogey, it just feels that way: 44 holes since his last blemish! Remarkable. I don’t expect any major stumbles from Frankie tomorrow, but I do love that Tiger is in that final group with him. Makes the proceedings so much juicier. Your winner: neither of them. King Koepka will come from behind to win by two.