While You Were Sleeping: What You Missed on Day 2 at the Presidents Cup 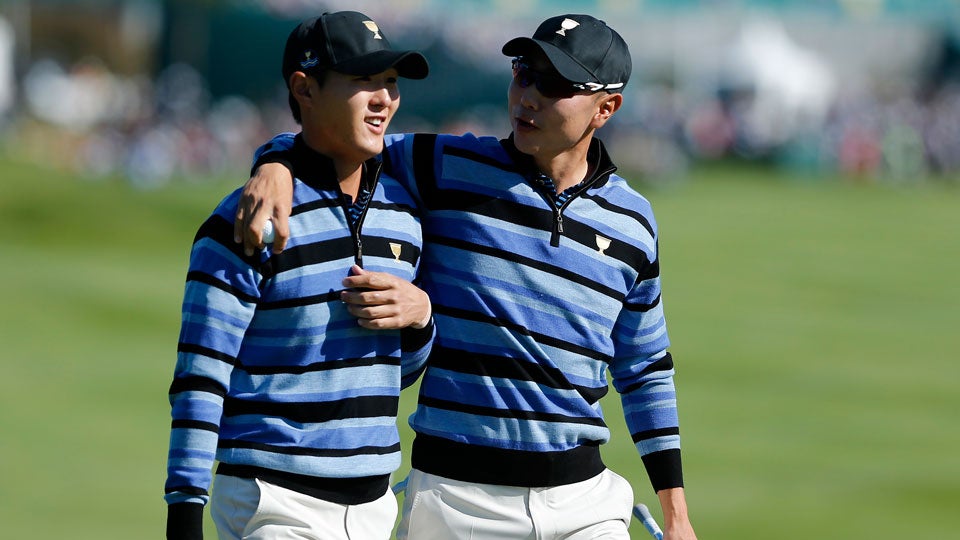 After Team USA took a 4-1 lead on Day 1 of the Presidents Cup, the outlook was grim for the Internationals, but on Day 2, they flipped the script.

The International team won three of the five matches on Friday, halving another as they closed in on Team USA, who now leads just 5.5-4.5. The pros were battling it out on the other side of the globe in Incheon, South Korea, so here’s a quick rundown of what happened while you were sleeping.

One of the matches was decided on the final stroke. Danny Lee and Sang-Moon Bae took Rickie Fowler and Jimmy Walker to the wire, where Bae made a 12-foot birdie putt on the 18th hole to win the match. The ensuing high-five with Lee, however, was not so good.

Phil Mickelson generated most of the excitement for Team USA. Mickelson holed out from 138 yards from a fairway bunker on the 12th hole. It vaulted him and Zach Johnson 1 up over Adam Scott and Jason Day, though the Internationals would eventually halve the match late.

The match might have been won by the Americans if not for a mistake by Mickelson. On the 7th hole, the 45-year-old American switched to a different ball, a violation of the one-ball condition, resulting in a point for the Internationals. Rules official also blundered, however, misinforming Mickelson that he was disqualified from the hole. Day made birdie to win the hole, so the Americans lost two holes on a single par-5.

I enjoy playing with Gracey. Looking forward to the weekend. http://t.co/p65eSbCJIE