The start of the 2017 PGA Championship is just one day away, and the excitement seems to be getting to some people’s heads, as evidenced by one particular fan interaction with Rory McIlroy on Tuesday.

Fans have been flocking to Quail Hollow all week to get a glimpse of their favorite pro golfers as they prepare for the final major of the year. Practice rounds at majors are great for spectators because they provide fans with a rare opportunity to interact closely with the players, a little too closely perhaps. 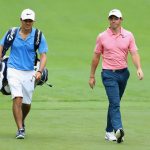 You may also like The King of Quail Hollow, Rory McIlroy is ready for this PGA Championship

While McIlroy was working the gallery line Tuesday signing autographs and taking pictures, one fan holding a baby implored the four-time major winner to put his John Hancock on her child. Being the generous pro that he is, McIlroy agreed and signed the baby’s white tee shirt. You can watch video of the bizarre incident from No Laying Up’s Twitter account below.

Rory got asked to sign a baby so he did pic.twitter.com/qamYUMsd5d

McIlory, who is considered by many as a favorite to take home the Wanamaker this week, tees off for the first round Thursday at 1:35 p.m. ET.