Jordan Spieth captured his second victory of the year and 10th career win in dramatic fashion with a bunker hole-out on the first playoff hole at the Travelers Championship last week, and the feat appears to have inspired youngsters around the country. 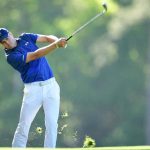 You may also like WATCH: Spieth holed a bunker shot to win the Travelers and his celebration was nuts

On Friday, a video surfaced on Twitter of two young boys recreating Spieth’s epic winning bunker shot, as well as the ensuing celebration between Jordan and caddie Michael Greller. Considering their age, we have to give these enthusiastic young golfers high marks for their reenactment, although they took the celebration a little bit further than their Tour counterparts.