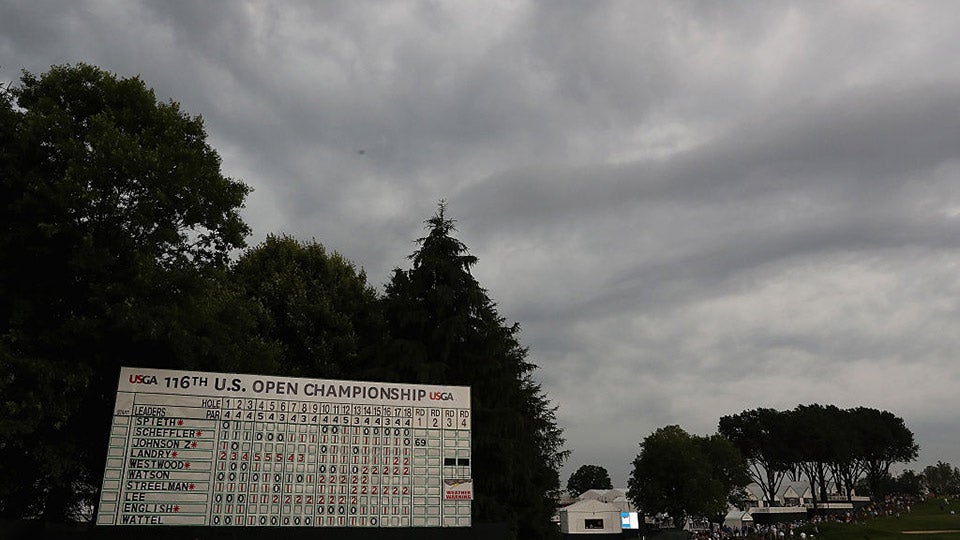 Dark clouds loom over Oakmont Country Club during Round 1 of the 2016 U.S. Open.
2016 Getty Images

1. ‘Soakmont’ is a very different beast.
Lightning, thunder, and driving rain made for a soggy, flooded Oakmont, a changed course from the ultra-fast, ultra-slick layout that the USGA had envisioned. As Michael Bamberger wrote in his postcard from the tournament: ‘Rain comes and suddenly the Oakmont you knew is now a different course. The greens will be playable. The tilted fairways will hold tee shots. The rough will be worse than ever.’ Multiple weather delays meant that only nine players managed to finish their rounds. Some players benefited from the water-logged setup (Bubba Watson, T2), while others floundered (Rickie Fowler, +6).

2. Who Andrew Landry is.
He’s frozen on his last hole until play resumes tomorrow, but the out-of-nowhere Texan remains atop the leaderboard, one shot ahead of Bubba Watson and Danny Lee. This is the first U.S. Open for Landry, who’s ranked 624th in the world. Can he hold on to the lead just a little bit longer?

3. Everyone loves the Stanley Cup.
All that suspended play made for lots of downtime. Some pros took advantage of the lull to snap selfies with the recently-won Stanley Cup and various Pittsburgh Penguins players. Paul Casey, Justin Thomas, and Rickie Fowler posed for photos with the trophy. 4. Watching the Euro Cup is the best way to wait out a rain delay.
During the first rain delay, Lee Westwood, Martin Kaymer, and Luke Donald and their caddies took refuge in the media tent, where they took seats in front of a screen showing the England vs. Wales soccer match.

5. Jordan Spieth’s marketing team is weirdly prescient.
Speaking of ways to wait out a rain delay, Jordan Spieth’s new Coca Cola commercial, publicized today, shows the World Number Two hitting a series of trick shots inside of a trailer–while a downpour erupts outside.