Tour Confidential: Is a 54-hole major as crazy as it sounds?

1. The LPGA wrapped up its major championship season at the soggy Evian Championship in France. A first-round deluge caused organizers to wipe out scores from early in the opening round and reset the event to a 54-hole tourney that began on Friday. You OK with the move, or was this tournament diminished?

Michael Bamberger, senior writer, Sports Illustrated: I am fine with it but then I don’t consider the Evian Championship a major. Just a nice event, played at a painfully slow pace on Sunday. The women have four real majors and I will use the historic names: U.S. and British Opens, the LPGA Championship, the Dinah Shore/Mission Hills.

Alan Shipnuck, senior writer, Sports Illustrated (@alanshipnuck): Agree that the Evian is not even on par with the Players, and the latter tournament is miles from being a major. It was a bad call and the wrong one to wipe out so many scores but at least that was on Thursday. The ensuing three days featured lotsa good golf and the final round was tightly contested by a bunch of top players. So, in the end it was an okay result, if we’re grading on a curve.

Josh Sens, contributing writer, GOLF Magazine (@joshsens): I’m OK with the move because you can’t control the weather or what it does to a venue, but that doesn’t mean the tournament wasn’t diminished. Fifty-four holes is by definition a lesser test than 72, unless I’m getting my second grade math wrong.

Jeff Ritter, digital development editor, GOLF.com (@jeff_ritter): Fifty-four holes is fine when absolutely necessary, but you can’t wipe out scores from that first day. Yes, the ladies that teed off that morning hit severe weather, but lucky and unlucky sides of the draw happen often — see all British Opens. They should’ve resumed the opening round on Friday, rather than restarting the entire event.

John Wood, caddie to Matt Kuchar (@johnwould): Why can’t they go to Monday? I mean, if it’s a major on the men’s side, any of them, I can’t imagine not being there until 72 holes were completed no matter how long that took. I believe the rule on the PGA Tour is if half of the field have completed their rounds, you cannot restart. (Not sure how far they got before they washed it out on Thursday.) Or, like Josh said, restart the first round Friday and play catch up. If it’s 36 on Sunday it’s 36 on Sunday. I may be old school, but to me a major becomes a major by tradition, by history, by excellence, and an agreement by the press and the players and the officials, not by announcing “This is a major.”

Joe Passov, senior editor, GOLF Magazine (@joepassov): I’m with you, Jeff, almost all the way, in terms of the British Open/luck-of-the-draw argument. In this case, however, it was deemed that spectators, as well as players, were in danger from the weather, and things needed to cease, period. But plant me in that camp that can’t stand contrived, forced majors, of which the Evian leads the pack. The LPGA didn’t need a fifth major, it didn’t need to be the Evian, and it shouldn’t be played in mid-September, when the weather is predictably dicey in the region. If there should be a fifth major at all, it should be in Korea, where a disproportionate number of world-class players reside or were born.

2. Two weeks after kicking away a final-round lead, Marc Leishman closed out a wire-to-wire win at the BMW Championship. When the Aussie gets going he’s proven to be as explosive as any player in the game. What’s prevented him from breaking through at a major?

Bamberger: I couldn’t speculate but one tends to win majors pretty much at the rate one wins Tour events so it’s no surprise he hasn’t. I love watching him play. He just seems like an unpretentious touring pro, ready to play, very athletic, no fuss.

Shipnuck: He’s not a great driver of the ball, and that means the rest of his game has to be razor-sharp to win. For a guy like Leishman, winning majors isn’t really the yardstick. He’s already had a pretty solid career.

Sens: As Alan says, and the stats bear out, he is not at the top of the game off the tee. But he’s come close. Ran into a bit of a buzzsaw in Zach Johnson in that playoff at St. Andrews. Not only do you have to play great to win a major, but no one else can play greater.

Ritter: The short answer is Zach Johnson, since Leish was in prime position to win that Open at St. Andrews. But pressure tends to expose a player’s greatest weakness, and for Marc that tends to be the driver. He hit a few loose tee balls again on Sunday at the BMW, but this time he had plenty of strokes to spare.

Passov: Sounds like driver has been the issue with Leishman … but it could also be a case of maturity and grace under pressure, which hits different players at different times. He might have had the talent all along, just lacked the mental game to accompany. It seems like he’s got both parts of the success equation under control these days.

Wood: I think I’d rather celebrate the great performance of this week than ponder why Leish hasn’t done something else, yet. Sleeping on a lead for three straight nights in any tournament is a unique kind of pressure, and he seemed to just get better and better. 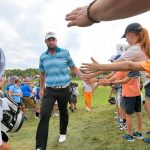 3. This week 30 players remain to take a run at a $10 million FedEx playoff prize. Who ya got?

Bamberger: Dustin Johnson. He likes money and is not afraid of it.

Shipnuck: It’s hard not to pick Spieth – he has three strong finishes so far in the, ahem, playoffs. And if he wins the Tour Championship and therefore the FedEx Cup he could steal the Player of the Year from his buddy JT. Spieth has already acknowledged this scenario; if he’s thinking about it, he’s motivated by it.

Sens: Spieth. Has a cold-eyed killer ever been so friendly?

Ritter: Took Fowler before the playoffs began and I’ll stay with him. Spieth deserves to be the favorite, but Rickie has been steadily excellent all summer. He’ll probably need to win at East Lake to get it done — no backdoor top 5s this time.

Passov: And I’ll Fosbury flop onto the bandwagon and pick Spieth. He’s the only Tour Championship winner in recent memory who’s entered, he has a runner-up at East Lake, and it’s a venue that doesn’t over-reward the bombers. He’s extra-motivated, too, for reasons outlined above: Dustin was the clear POY during the first half of the year, and Jordan had the second half wrapped up — until JT grabbed the PGA Championship. It’s a nice three-man race right now, and I think Spieth will dig deep to get it done.

Wood: It’s hard not to pick Spieth, though the five who have the opportunity to claim it with a win are all in good form. No matter what happens, though, it always seems like Jordan is able to put up a score. After 72 holes, he always seems to be there. So his second-place finish next week to Matt Kuchar will be enough for him to win the FedEx Cup.

4. Earlier this week, PXG founder Bob Parsons announced that he had sued TaylorMade Golf, alleging the new P790 irons infringe upon PXG patents. On Thursday, PXG sued Worldwide Golf, the parent company of golf retail brands including Edwin Watts and Roger Dunn, and followed that up with suits Friday against the PGA Tour Superstore, Golf Galaxy, and Dick’s Sporting Goods. Regardless of whether PXG has a case, can you see the logic in the upstart equipment company going after its primary retailers?

Bamberger: I don’t think it’s really logic at work here, I think it’s a statement, consistent with the one the company has been making all along: we are disrupters.

Shipnuck: The retailers aren’t the target, TaylorMarde is — this is just a way to keep any product from being sold while this moves through the courts. Classic Parsons move: no f—s given.

Sens: The man plays hardball. But he’s also a scaredy cat. Ever since PXG came out, I’ve been sending periodic messages to his assistant, telling her I’ll play Bob in a match at the venue of his choice. He can use his fancy new clubs. I’ll use my 20-year-old ones. Straight up. My net worth against his. Radio silence. He’s been ducking me.

Ritter: This is a Golf.com video essay in the making, Josh. Sounds like Parsons is the kind of guy who carefully picks his spots, just as he’s doing here with the lawsuits.

Wood: It’s publicity, and it’s getting PXG written about. I don’t think Mr. Parsons has any intention of selling his clubs in any big-box stores, so burning those bridges is no skin off his nose. 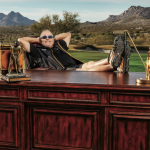 5. Last week we ranked the 18 most infuriating shots in golf, from the ricochet off the flagstick to blading it into the clubhouse. What do you think is the most aggravating shot in the game?

Bamberger: Being struck by your own shot. I hate when that happens. That is, playing pinball with a nearby tree. I think it comes back at you with greater velocity than what you launch it with. (It’s happened to me only once.)

Sens: The most annoying shot is the one that your playing partner takes too long to hit. Speed it up.

Shipnuck: Missing a putt then gutting it when you try a second time. It’s so easy when you get out of your own way.

Ritter: When you’re playing a par 5 and wait for the green ahead to clear so you can try to reach in two, only to then spectacularly flub your fairway wood. It’s a terrible shot, and you held up your group to wait for it. Twice the pain. Still gathering data to support this, but my theory is the longer the wait, the bigger the duff.

Passov: Missing the green with a short iron in your hand, after smoking a great drive. You can’t help but beat yourself up over it, being such a totally unforced error, and it makes it challenging to regain composure in the subsequent up-and-down attempt. If you’re reading between the lines, it’s been happening to me with annoying regularity … and it’s especially aggravating because I’m getting fewer and fewer short-iron approach opportunities these days.

Wood: Weighing your options … you can take a risky shot with a big reward but an equally penal outcome if you don’t pull it off. You decide to play it smart, lay up with a hybrid rather than go for it with the driver, and then you hit your hybrid in a fairway bunker. You dial it back, play it smart, and you’ve put yourself in an awful position. Drives me nuts. But I like Michael’s best.