AUGUSTA, Ga. — Tom Watson may have come up just short in his bid to win the British Open at 59 years old, but he did pull off another remarkable feat on Wednesday: winning the Masters Par 3 Contest at 68 years old.

Watson made six birdies in nine holes to edge Tommy Fleetwood by a stroke and become the oldest player by six years to win the event (62-year-old Sam Snead won the event in 1974).

The Watson Watch was officially on when he birdied four of the first five holes playing alongside two other giants of the game: Gary Player and Jack Nicklaus, who shot a sporty four-under of his own to tie for third.

No player has won the Par 3 and gone on to win the regular tournament, but that won’t be a problem this year for Watson, who had just one mission this week.

“Since I’m not playing in the tournament, I thought, ‘Let’s go for it this year,'” he said afterward.

Watson’s win — great as it was — wasn’t even the most remarkable thing to happen on a breezy afternoon on the hilly, loblolly-lined layout.

Tony Finau made an ace at the 7th, then rolled his ankle during a celebratory trot down the fairway. 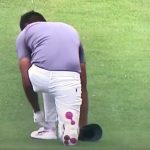 Minutes later Jack Nicklaus’s grandson, Gary, on the bag for gramps, holed out a tee shot on the 8th, sending a charge through the property and tears to Jack’s eyes.

Call it a Par 3 Contest for the ages.