Tiger on managing back pain: ‘I was just taking drugs on top of drugs’

Tiger Woods is looking forward — that much was clear in his Tuesday press conference.

“Well, I’ve come out the other side,” he said when asked about managing his back pain, a struggle that included a summer stint in rehab. But the 14-time major-winner insisted that he is in a much better place now.

“I feel fantastic, and a lot of friends have helped me, and, as I alluded to, I didn’t realize how bad my back was,” he said. 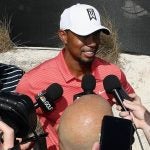 You may also like Tiger Watch Live: Videos, photos and updates from Tiger Woods’s return at the Hero World Challenge

Karen Crouse of the New York Times reported a particularly vivid comment Woods made to her on the driving range, “I was just taking drugs on top of drugs, just trying to kill the nerve pain. It was like something hitting your body about 200 times a day. And the thing is that I didn’t know when it was coming.”

Faced in the press conference with a variety of open-ended questions, Woods focused many of his answers on the concrete day-to-day difficulties of living with constant back pain.

“Yeah, I mean, I was trying to go away from the pain,” Woods said. “And trying to sleep, which I hadn’t done in a very long time because of the things I had been dealing with. And so as my back improved, I’ve been able to start sleeping again because I don’t have the nerve pain going down my leg, I don’t have my leg twitching all over the place. I don’t have these issues any more.

Woods said he hasn’t watched the dashcam footage following his May arrest for DUI. As for how he’s feeling now?

“The neatest thing for me is to be able to get up out of bed and grab a club and not use it as a crutch. Now I’m able to take a swing. That’s so exciting, you have no idea how exciting that is. I’m just so thankful to have had this procedure and that I’ve gotten to this point.”