Spieth channels Arnold Palmer on 13th hole, and it pays off big time 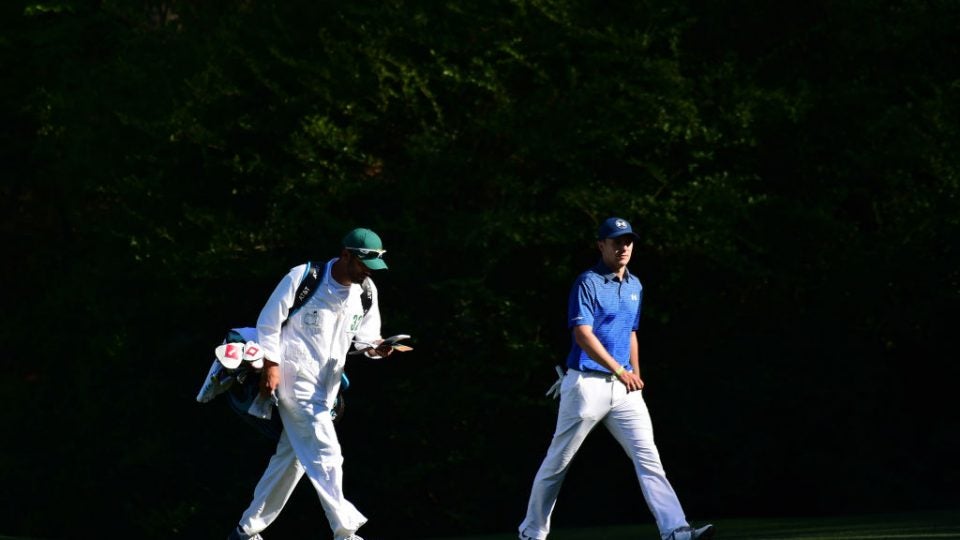 AUGUSTA, GA - APRIL 08: Jordan Spieth of the United States and caddie Michael Greller walk to the 13th green during the third round of the 2017 Masters Tournament at Augusta National Golf Club on April 8, 2017 in Augusta, Georgia. (Photo by Harry How/Getty Images)

There may be no better spirit for a golfer to channel at Augusta National than Arnold Palmer, who passed away in September and remains a Masters legend. Jordan Spieth did just that on the 13th hole during the third round of the 2017 Masters, when he was overhead asking his caddie, “What would Arnie do?”

Spieth spoke about this moment, which was recorded and aired on the telecast, after his round. Caddie Michael Greller wanted Spieth to lay-up on the par-5 13th, but Spieth resisted the idea, opting for a different course of action, inspired by the King: “I thought, in order to win this golf tournament ‑‑ I hit my favorite shot I’ve ever hit in competition in my life on that hole going for it when we had that decision in 2015. And so there’s good vibes,” Spieth said. “I just, you know, ‘What would Arnie do?’ was my way of expressing it to Michael, which we all know exactly what he would have done.”

Spieth charged up the leaderboard on Saturday, finishing tied for fourth with Ryan Moore and Charley Hoffman, and just two shots off the lead. After the Arnie-inspired shot from the pine straw on 13, he tapped in for birdie. As for his chances to win a second green jacket at just 23 years old, Spieth invoked the King once more  on Saturday. “There are some studs at the top of the leaderboard, so it won’t be easy,” he said. “I’ll have to play like Arnold Palmer.”

“(Greller) was very much pressing for a lay‑up there, and laying up was the smart shot. I had 228 to the hole. I couldn’t see the green, given where the tree was located. I’m right‑handed. I could see the right edge on the tower, but my ball‑‑the actual shot wasn’t blocked. It was just about committing to what you can see and what you actually know is there. And so he liked the lay‑up. I’ve made birdie at that pin, I think, the last two years by laying up down the left side and hitting a wedge in there, and I feel like I’ve done a lot of course knowledge to know where to lay up and how to hit that pitch in there. So it actually, even though it’s a hard shot to that pin, it’s the most difficult pin on the hole. I had confidence in the lay‑up situation, but I had a great number. I had a 4‑iron number. It was going to cover if I struck it solid, and I just had to turn it off the tower. And if I overturned it, it would just be in that swale and I figured I would get it out of the swale to the same proximity that I would hit the wedge shot. So all that went through my head.”