Ryder Cup 2016: How Reverse Momentum Can Help The U.S. Win 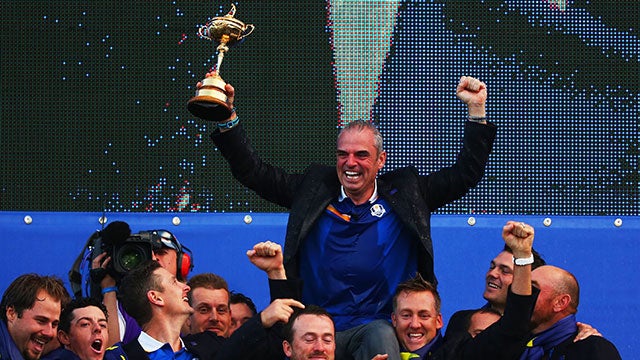 Before it became apparent that Tom Watson was no Ryder Cup miracle worker, before Team USA’s press conference from hell, before the hurt feelings and all that task force hysteria, there was a pivotal moment at the 2014 Ryder Cup at Gleneagles, the Jack Nicklaus-designed parkland course set in the gently rolling hills of central Scotland.

Europe had gone into Sunday with a comfortable 10 to 6 lead, but the Yanks were rallying. Jordan Spieth was 3 up on Graeme McDowell, Patrick Reed was 1 up on Henrik Stenson, Hunter Mahan was 4 up on Justin Rose, and Phil Mickelson was heavily favored to beat Stephen Gallacher. The U.S. stood to win four of the first five matches, which in Ryder speak meant there was a lot of red on the board. Rowdy and laughing at daybreak, the pro-Europe crowd around the first tee at Gleneagles now began to stir and murmur, and European captain Paul McGinley sidled over to vice-captain Des Smyth.

“We’re going to find out in the next hour,” McGinley said, “whether the team talk from last night is going to have an effect.”

Europe’s team talk was about momentum, that mysterious, hard-to-quantify force that ultimately explains who wins and who loses the Ryder Cup, along with a whole lot else in the arenas of sports, business, politics and human achievement in general.

Academics used to try to minimize the importance of momentum. They came up with something called the Hot Hand Fallacy, which posited that people are too easily led to believe that past performance indicates future results.

Then, in 2014, Jeffrey Zwiebel at Stanford and Brett Green at Cal-Berkeley said the Hot Hand Fallacy was wrong, and momentum was real. Earlier research, they argued, did not account for the opposing team devoting additional defense to the player with the hot hand, bringing shooting percentage back down. After studying two million Major League Baseball at-bats over 12 years, they determined that a player’s most recent 25 times at bat significantly predicted how he’d do his next time up to the plate.

In golf no one can pitch around the hitter or bring in the flame-throwing reliever; there is no defense, per se, which is to say a hot hand can be even more impactful.

“With our hypothesis, you’d expect to see even more evidence of a hot hand in golf,” says Zwiebel, a professor of finance at Stanford. “We look more at the individual level: If Tiger Woods did well on the last hole he’s more likely to do well on the next hole. But it could well be that the psychological effects of one teammate’s hot hand spill over to another teammate, which then would show up as team momentum.”

And that momentum may be even more potent amid the passionate, team-oriented theater of the Ryder Cup. Momentum has an offensive component—keeping it when you have it. And it has a defensive component—wresting it away from the other guy when you don’t. There is macro-momentum—the overall lean of the matches over longer time horizons. And there is micro-momentum—the swings within a day, session, or match that dictate which men are heroes and which men suffer through unhappy press conferences.

In addition to the usual diversions (Ping Pong, etc.), McGinley’s team room at Gleneagles in 2014 featured a large color photograph of a large rock in a raging, frothy ocean. It was a reminder to hold strong when things got tough, when the momentum went the other side’s way. In a sense, the rock was McGinley saying the best Ryder offense is a good defense. He could have easily used a photograph of a tug-of-war side digging in its heels. The point was to avoid becoming the Europe that gave up a four-point lead on the last day to lose in 1999, or the U.S. team that gave up a four-point lead to lose in 2012.

In the team room Saturday night at Gleneagles in 2014, with Europe ahead by three, McGinley asked just one player to speak: Lee Westwood, who had seen both the agony and the ecstasy of momentum. Westwood lost to Tom Lehman 3 and 2 to start the U.S. landslide at Brookline in ’99. Then, playing well down the lineup, he beat Matt Kuchar by the same score as Europe rolled at Medinah in 2012.

Mostly, though, McGinley spoke for himself.

“I said, ‘Expect to see red on the board; America is not beaten,’” McGinley says. “‘They’re world-class players. We’ve got to ride the storm and come out the other side.’”

Which is what happened. McDowell flipped his match against Spieth, dominating the back nine for a 2 and 1 victory. Rose birdied five straight holes for an unlikely halve in his match against Mahan, taking a second American flag off the board. Europe went from getting creamed in the first five matches to splitting the five available points; more crucially, they’d retaken the momentum. They cruised home, winning 16 ½ to 11 ½.

Almost all of the Ryder Cup macro-momentum belongs to Europe, which is riding a wave that has seen the side win six of the last seven biennial competitions. “We’re in a must-win situation,” says Mark Calcavecchia, a veteran of three U.S. teams.

“The greatest thing Europe has done is make the U.S. team desperate to win,” says six-time Ryder Cup player Padraig Harrington, who will be one of European captain Darren Clarke’s vice-captains at Hazeltine. “Maybe the Americans are trying too hard.”

That could be, but European cohesiveness, continuity and habit have had a lot to do with it, as well. Clarke has been around seven Ryder Cups, five as a player, two as vice-captain, so he’ll be imminently prepared as a captain. Of those seven Ryder Cups, he has been a part of just one losing effort, in 1999. That’s macro-momentum.

But Europe has demonstrated a better grasp of micro-momentum, as well, the ability to predict and manage the moment-by-moment energy shifts that define the event.

“It’s all about breaking the cycle when you’re behind,” says Europe’s Ian Poulter, a veteran of five Cups (12-4-2) who will sit this one out with an injured foot, “and about trying to hold lengthy periods of momentum longer than the other team.”

The first big case study in Ryder Cup momentum came in 1999, at the Country Club in Brookline, Mass., where Ben Crenshaw’s U.S. team made history by coming from 10-6 down to win 8 ½ of a possible 12 points in the singles and win. Davis Love III, who will captain the U.S. team for the second time in the last three Ryder Cups at Hazeltine, was a player on the ’99 team. He crushed Jean Van de Velde 6 and 5 in a match that was typical of the great golf by the Americans and strategic misfires by Europe captain Mark James. Playing in the third, fourth and fifth matches out, hapless European rookies Andrew Coltart, Jarmo Sandelin and Van de Velde were thrown into action for the first time all week and were beaten handily. So were Westwood, Clarke and Jesper Parnevik as the U.S. won the first six matches.

“Lee and Darren had each played 72 holes, and were obviously tired and had lost their games,” McGinley says, as if still lamenting James’s tactical blunders.

Harrington put up the only European flag on the board amongst the first nine matches sent out. “If matches aren’t going your way it’s important to stay alive,” he says. “I didn’t look at the board, so I didn’t see the momentum going against us. I was too busy doing my own thing, so I might have become the rock there because I didn’t realize what was happening. I beat Mark O’Meara on 18, 2 up, and I thought I’d won the Ryder Cup.”

For a while, the ’99 Battle at Brookline stood as the most vivid example of momentum. Then came the 2012 Medinah Miracle. Europe was behind 10-4 late Saturday afternoon, and captain Jose Maria Olazabal’s team looked lost. McGinley, who has been involved in six Ryder Cups — three as a player, two as a vice-captain, one as captain — says he’d never seen a more organized, motivated and dominant U.S. side.

“Ten-four was a very, very strong red wave,” Poulter says, “and one that we had to try and break. Obviously we had been written off. Pride kind of kicked in at some stage and we said, look, we have to put two hands on this match and play as hard as we possibly can for each point or even each half point.”

Poulter and partner Rory McIlroy were 2 down with six holes to play in a best-ball match against Jason Dufner and Zach Johnson, but McIlroy holed a downhill birdie putt on 13 to cut the deficit in half. Poulter took over from there, reeling off five straight birdies, his eyes bugging out of his skull with every made putt, to earn a point for Europe. Meanwhile Luke Donald and Sergio Garcia, playing in front of them, beat Steve Stricker and Tiger Woods 1 up. Europe now trailed 10-6, and for the first time it had momentum.

“It comes down to a chip in, a 50-foot putt, a silly thing like your opponent missing a pivotal four-foot putt,” Poulter says. “The games are very, very tight.

“Whether it was Rory’s birdie at 13 or the subsequent birdies after that,” he adds, “it gave the side the confidence to come back and do what we did Sunday.”

On Sunday, Donald, Poulter, McIlroy, Rose and Paul Lawrie beat Bubba Watson, Webb Simpson, Keegan Bradley, Phil Mickelson and Brandt Snedeker, respectively, and Team USA’s big lead was gone. When Martin Kaymer holed his putt on 18 for a 1-up win over Stricker, it was over. This time it was the Europeans, not the Americans, who had won 8 ½ of the available 12 points to win 14 ½ to 13 ½.

“That was unbelievable,” Calcavecchia says. “That was probably one of the Ryder Cups that comes to mind that I cannot believe we lost. It happened so fast, too.”

Can the U.S. finally win a Ryder Cup? Maybe the better question is whether the U.S. can finally out-maneuver Europe in its ability to harness micro-momentum, and in so doing begin to reverse its decades-long negative macro-momentum.

“There are ebbs and flows in the Ryder Cup,” McGinley says. “The question is, when the momentum comes against you, can you be the rock? Can you hold it?”