ERIN, Wis. – For all the whining earlier in the week about the fearsome fescue that lines the fairways at Erin Hills, another f-word was on players lips’ during the opening round of the Phil Mickelson-less 117th U.S. Open.

Soft greens, wide fairways, gettable pins, a pleasant but not particularly meddlesome breeze. It all added up to a decidedly un-U.S. Open-like setup Thursday that had the scoreboards bleeding Badger red and Rickie Fowler carving up Erin Hills like a side of grass-fed Wisconsin beef.

On a day when a U.S Open first-round record 44 players broke par (two of whom were amateurs), Fowler la-de-da-ed his way to a bogey-free, seven-under 65, which tied the relative-to-par scoring record in the first round of a U.S. Open; Fowler joined Jack Nicklaus and Tom Weiskopf, both of whom carded seven-under 65s in the opening round of the 1980 Open at Baltusrol. “You don’t get many rounds at the U.S. Open that are stress-free,” said Fowler, who had a Steph Curry-grade handle on every facet of his game. He hit 12 of 14 fairways, 15 of 18 greens and required just 1.5 putts per green, all while exhibiting the steely poise of a fighter pilot, albeit a fighter pilot in modish French blue slacks. “He’s been emotionless today, which is something that seems to bode well for U.S. Open players,” Paul Azinger said on the Fox telecast.

That the USGA’s setup czars laid down their arms Thursday was unsurprising. With controversy marring the last two editions of this tournament, the blue coats desperately needed this Erin Hills Open to get off to a drama-free start. “I thought it was very, very fair,” Brandt Snedeker said of the setup after posting a two-under 70. “More so than I was expecting for a U.S. Open.” Said Charley Hoffman, who also shot 70, “If you’re ever going to get a U.S. Open and be able to score, today was the day.”

Fowler wasn’t the only player to go super-low. Paul Casey and Tour rookie Xander Schauffele, both in the afternoon wave, are just a shot behind Fowler after posting sporty six-under 66s. In an eclectic group at five under are 27-year-old bomber Brooks Koepka; pint-sized left-hander Brian Harman, who picked up his second Tour win at the Wells Fargo last month; and Englishman Tommy Fleetwood. 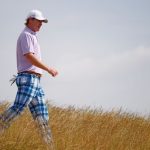 You may also like Players know what lies ahead: the U.S. Open is about to get a whole lot tougher

Lurking at four under are Patrick Reed, who’s seeking his first win since the 2016 Barclays, and Australian Marc Leishman, who finished 18th at Oakmont a year ago. In the pack of seven players at three under is none other than Kevin Na, who many observers had written off in this championship after Na earlier this week circulated a video in which he upbraided the USGA for the preponderance of native grass at Erin Hills. (Who said karma’s a b—-?)

Fowler’s round began at the par-4 10th and he wasted little time picking apart the heaving, treeless layout, making birdies on 11, 12 and 14 with a lethal combination of pin-hunting irons and dead-center putts. Fowler tacked on another at the par-5 18th (he birdied all four par-5s) to turn in 32, then made two more birdies on 1 and 2.

Fowler was undoubtedly having fun, but his playing partner, white-hot long-bomber Jon Rahm, looked like he’d rather be slugging cervezas in the bar. The tempestuous Spaniard was a trendy pick to win this week, but the ebbs and flows of Erin Hills gave him fits. After his approach at the par-4 3rd came up just short to the elevated green, Rahm was left with a straightforward pitch up the hill. When that shot came up 10 feet short, Rahm slammed his putter into his bag. On the next tee box, he chastised a pack of reporters and photographers for not keeping up. “Hey, we gotta get to the tee!” he barked. “Every single hole, guys, really?”

Rahm finished with a four-over 76 but he wasn’t the only headliner to struggle; in fact, as many amateurs finished in red numbers as did top-10 players in the world. Defending champion and new father Dustin Johnson came in as the betting favorite but couldn’t make a putt on his way to a 75. World No. 3 Jason Day made two triples (something he’d never done in a Tour event) and hung up a ghastly 79. Billy Horschel needed all of one hole to dash his title hopes, making a quad at the par-5 opener.

And then there was Rory McIlroy. Earlier in the week Rors woofed that the best players in the world should have no trouble hitting Erin Hills’ 60-yard-wide fairways. On Thursday he hit a field-worst five fairways and shot a six-over 78.

If Erin Hills’ ball-gobbling fescue and 120-plus bunkers weren’t enough to keep the field on its toes, another disruption came in the form of a blimp crash at approximately 11:15 a.m. local time. As players sized up their tee shots and yardage books, a blimp, which advertised PenFed credit union but was not affiliated with the U.S. Open, caught fire and fell from the sky, landing in an open field about a half-mile from the course.

Jamie Lovemark was on the 7th tee when the aircraft went down and was among several players who witnessed the catastrophe. “I felt sick to my stomach,” he said. “I had the shakes. I didn’t know what was going on. It was a horrible sight.” (Lovemark regained his composure and birdied the next two holes before signing for a three-under 69.)

Dru Love, the 23-year-old son of Davis Love III, had every reason to feel nerves on Thursday: He is playing in his first U.S. Open and has his old man on the bag. But with the galleries firmly behind him (“I think everybody’s rooting for us,” he said), he fired a one-under 71, thanks in part to some advice from his dad.

On the 17th hole, Dru tugged his tee shot into some matted-down fescue left of the fairway. With 190 yards to the hole, Dru wanted to hit an 8- or 9-iron but Davis talked him into a wedge, which turned out to be the perfect club. “If he hadn’t been there to tell me to hit pitching wedge, I would have soared it into the grandstand,” Dru said. He’s in good position to make the weekend, which means father and son will walk together in the final round of the U.S. Open on, that’s right, Father’s Day. (Cue the weepy Fox Sports vignette.)

Though Erin Hills greeted much of field with open arms Thursday, the warm welcome is unlikely to last. With only a slight chance of rain over the next three days, the greens will bake out, scores will creep up and this U.S Open will begin to look and feel more like a U.S. Open. Fowler knows that too well, which is why after coming up empty in 29 previous major starts, he’s not exactly popping party streamers to celebrate his momentous first round.

“It’s cool to be part of some sort of history in golf,” he said. “But I’d rather be remembered for something that’s done on Sunday.”