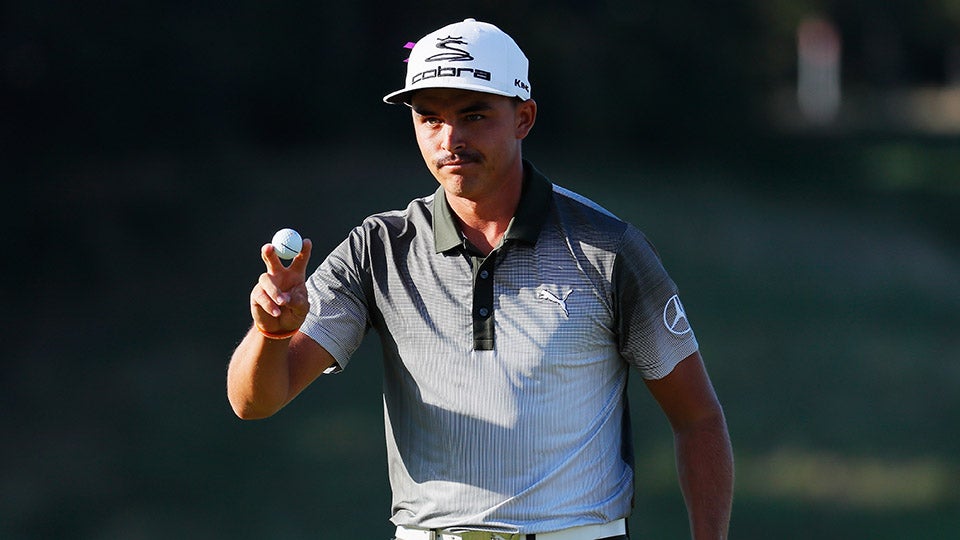 Rickie Fowler waves to the gallery on the 18th green after a three-under par 68 during the third round of The Barclays.
Kevin C. Cox

FARMINGDALE, N.Y. (AP) Rickie Fowler kept bogeys off his card for the second straight day and closed with a 5-foot birdie putt for a 3-under 68, giving him a one-shot lead over Patrick Reed going into the final round of The Barclays.

Fowler has gone 45 holes without a bogey at Bethpage Black, the site of two U.S. Opens and among the toughest courses on the PGA Tour. Along with his three birdies Saturday, he made three par-saving putts of at least 10 feet, including one from 25 feet early in his round.

And he needed them all.

Fowler, who was at 9-under 204, now is in prime position to win for the first time on the PGA Tour in a year and play his way onto the U.S. Ryder Cup team.

This is the final tournament for Americans to earn one of the eight automatic spots for the Ryder Cup matches at Hazeltine at the end of next month. Fowler was at No. 12 going into the opening FedEx Cup event with its $8.5 million purse and needed at least a third-place finish to earn a spot. His work is not done.
Reed, who is No. 8 in the Ryder Cup standings, settled into his round and wound up with a 71, putting him in the final group with Fowler. Right behind was Adam Scott, who also saw his share of putts go in, especially a 45-foot birdie on the 15th hole. Scott started out his round by holing a lob wedge from 98 yards for an eagle, and his 65 was the lowest score of the tournament.

Scott, who hasn’t seriously contended since his back-to-back victories in Florida five months ago, was two shots behind at 7-under 206. Martin Laird (69) and Emiliano Grillo (71) were three shots back, while Justin Thomas got into the game a 66 and was in the group at 5-under 208, which included defending champion Jason Day.

For Fowler, the timing could not have been better.

”It’s nice to finally see some putts go in,” Fowler said. ”With a few putts going in, it frees up the rest of your game. I’ve been swinging well for a long time, and I’ve been waiting for the putter to catch up.”

Fowler won against a strong field in Abu Dhabi at the start of the year, and he lost a two-shot lead with two holes to play in the Phoenix Open. Since then, he hasn’t been much of a factor has his ranking – in the FedEx Cup and the Ryder Cup – began to plunge.

Not wanting to take a chance on being among the four captain’s picks, he has a chance Sunday to secure his spot for Hazeltine.

”It’s pretty simple,” Fowler said. ”I’ve got to take care of business tomorrow. It’s been awhile since I’ve been in this position. It’s going to be tough tomorrow. We’re on one of the – if not the – toughest golf courses we play all year. It’s been a long time coming, and it’s going to be fun.”

Reed, dressed all in black on another scorching afternoon on Long Island, managed to escape with a bogey from a horrible lie right of the third green. He muffed a chip on the fifth hole and made bogey, then drove well right into a bunker and made another bogey on the sixth hole. He bounced back with a pair of birdies, and made all pars on the back nine. Considering the difficulty of the Black’s back nine, that was more than enough to stay in the game.

Scott can relate to how Fowler is feeling with the putter. He had no complaints with how he played tee-to-green, but he was getting aggravated with his putting. One good round, finally, changed his outlook.

”The front nine is the gettable nine, and to turn in 4 under set up my round,” Scott said. ”I knew anything under par on the back, I would have a great round, and that was kind of my goal. I rolled a couple long ones in, and that felt good and kept the momentum going. Hopefully, something to build on for tomorrow and beyond.”

Day was hopeful of more than a 70 as the No. 1 player in the world tried to get into position. Birdies on the par 3s on the back nine helped atone for some wild tee shots, and he was still very much in the mix.

Jordan Spieth scrambled his way out of the rough and the sand. Spieth didn’t hit a fairway from the second hole until the 15th, yet he still played even par. But on the par-3 17th, he flubbed a chip and took double bogey, and a birdie on the final hole gave him a 72. He was six shots behind.