#AskAlan: Why was recent champ (and solid Ryder Cupper) Keegan Bradley kept off the U.S. team? 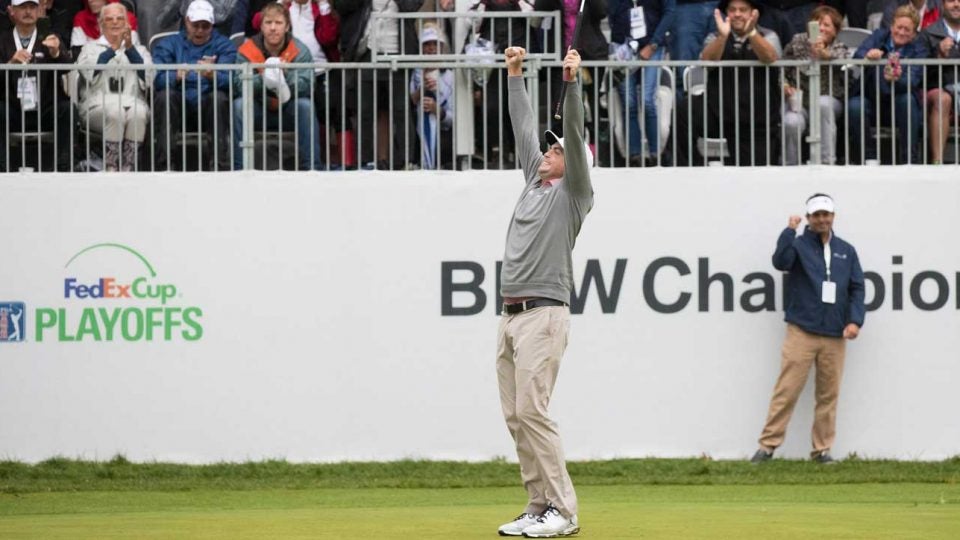 Keegan Bradley won the BMW Championship Monday but was passed up for the final captain's pick.
USA Today

Now that the Ryder Cup teams are sorted I feel vaguely unmoored…what is there left to obsess over between now and Paris? Oh, I guess I’ll find something…

How golf is it that Justin Rose takes the No. 1 ranking while finishing second, as Finau goes into East Lake third in the Fedex without a win, and Brooks is languishing seventh in points despite two Big Ones this year? -@NaaderBajwa

These are the times that try men’s souls. Hard to imagine a more inglorious way to take the number one spot than Rose’s bogey-bogey finish to kick away a tournament, but of course the World Ranking reflects a larger body of work. Is the FedEx Cup points system absurd and annoying? Obviously. Should we spend any more time kvetching about it? Nope.

How can you leave the red-hot Keegan Bradley off the Ryder Cup team? #AskAlan -@PurdueMatt05

I’m not sure about red-hot…since the Players Bradley has only one other top-10, a strong showing at the Canadian Open in July. But he’s played well in previous Cups, is such a great driver of the ball he can pair with anyone and he’s a Phil favorite, so it’s puzzling that after such a rousing win Bradley didn’t garner more consideration. The whole point of pushing back the final pick is to identify a peaking player, no? Finau has been playing at exceptionally high level for a long time but he hasn’t done anything as spectacular as Bradley’s closing 64. I understand why Furyk wanted Finau and think it’s a good, highly defensible pick. But let’s just end the charade of the delayed final pick and start picking all four guys at the same time, because it seems increasingly unlikely any captain is going to blow up months of planning at the very last second and take a flier on a guy like Bradley who has previously been off the radar.

Could the American Ryder Cup “B” team (Cantlay, Xander, Berger, Zach, Kuch, Wise, etc.) defeat the Internationals in the Prez Cup? I kinda think they’d have a shot. #AskAlan -@TheBrianEvenson

This is so savage…and I totally agree.

Rory and Tiger finished ranked 1st/2nd in strokes gained-tee to green this week. If you could only chose one, would you take Tiger’s iron play or Rory’s drives? -Wes (@small_Du)

Wow, this is a tough one. Since my iron play is so inconsistent I’d probably take Tiger’s, because it would help my scoring more – when I’m hitting my driver well I’d go really low and if I’m struggling off the tee I could just play more conservative clubs to get the ball in play and then go pin-seeking. But, gawd, how fun would it be to step on every tee knowing you’re going to smash it 330 down the middle? But then you chunk a wedge into the greenside bunker and make bogey and it feels slightly less majestic.

Is this the teams you envisioned when you wrote your infamous Ryder Cup prediction article? #AskAlan -@ScottyGman23

The U.S. side has actually gotten stronger, and Europe bit weaker. Among the core Americans, Spieth has had a down year — though let’s not forget he nearly stole the Masters and was in the final group at Carnoustie — but Koepka and Reed more than make up for that with their major breakthroughs. Throw in the expected fine play from JT, DJ and Rickie and this young, insanely talented half-dozen was always going to be the core of the U.S. team. But a year ago, when I wrote the column, Tiger looked like he might be done forever and Phil was in a victory drought stretching back to 2013. Both have made significant progress this year. Yeah, their Ryder records are sucky, but they’re different people and players now, and both bring an undeniable presence to this Cup. In Bryson and Finau the U.S. adds two more young studs who are among the game’s hottest players right now. How stacked is this U.S. squad? The players I’m least excited about are Bubba Watson (a probable Hall of Famer with three wins this year!) and Webb Simpson (who took the fifth-biggest tournament of the season, finished top-20 at all four majors and shot a Sunday 62 to finish second at the Wyndham last month!).

Meanwhile, Europe has taken some unexpected hits. One of team’s stalwarts, Sergio Garcia, has been atrocious all year and now comes in with a huge target on his back as a controversial captain’s pick. Another expected foundational player, Henrik Stenson, 42, is battling an elbow injury and has won only once since the last Ryder Cup. McIlroy continues to be dogged by shaky putting and an unmistakable Sunday malaise. Here’s a mind-blowing stat: of the six rookies on Europe’s 2016 team not a single one will play in Paris, including Thomas Pieters, who was their man of the match. Of course, it’s not all doom and gloom for Europe. Jon Rahm and Tommy Fleetwood have both turned into world-class players and will be a load at the Cup. Tyrrell Hatton and Alex Noren have won a bunch of tournaments between them. (Of course, combined Ryder Cup appearances of the four players in the preceding two sentences: zero.) Ian Poulter has found some form and Paul Casey returned to his roots and will add veteran depth. Justin Rose has deservedly risen to number one in the World Ranking. Francesco Molinari has been nails and now enjoys the swagger of a major championship winner. Thorbjorn/Thunder Bear makes a ton of birdies. In summary, this European team is very good and very dangerous. But it will need its six rookies to play with veteran poise, its superstars to deliver despite the heavy workload and Garcia and Stenson to suddenly find themselves. Even then it won’t be enough.

#AskAlan Who goes all 5 matches in the Ryder Cup? I say only JT and Koepka for US, but Rory, Fleetwood, Rose, Rahm for Europe. -@amolyajnik

I would want Dustin to play five matches given what a weapon his driver is, but I guess we’ll have to see where his head is given the recent tumult in Paulina’s Instragram. Spieth would also be a candidate if his putter is hot right out of the gate. And of course P. Reed went five matches in ’16 and will likely do so again. I think the four Euros you mentioned are probable. Poulter will no doubt want to play every session but now that he’s pushing 43 it would be prudent to save some mojo for singles.

Alan, seems like between Reed’s cold-ish play of late and throwing out the “guess my name needs to be Spieth” comment earlier in the season (plus JT’s inclusion on the team) do you think their Ryder Cup pairing comes to an end this time around? -Jeff (@MPortfolios)

Playing in a hostile environment, with all the hype leading up to this Cup, I expect Furyk to start out with proven pairings, which means keeping the dynamic team of Spieth-Reed together for at least one session on Friday. But no doubt Reed is advocating strongly to play with his hero Tiger, and Spieth and JT would surely enjoy being paired together, so I think you’re right that Jordan and Patrick will transition from monogamy to a let’s-see-other-people phase.

#askalan If USA needs 8 points in singles at the RC how would you load the lineup?? -Tom (Tabel24)

Are you crazy, man? That would greatly reduce our opportunities to second-guess the captains!

It starts with your Debbie Downer attitude, Ron! But most amateurs either have too shallow an angle of attack, don’t generate enough speed through the sand, or both. One of the great joys of being at a Tour event is listening to the sand shots — there is no sweeter sound than the thump that comes with these guys powering the club through the sand. They’re smashing the sand. Open up the face, bring the club down from the outside at a steep angle and try to accelerate through the ball and your sand game has to improve.