Presidents Cup report cards: The grades are in for all 24 players and both captains

JERSEY CITY, N.J. — When I was a junior in college, I had a professor for a creative writing seminar who on the first day of class stood in front of the room and announced: “I’m not afraid to give everyone here an A, and I’m also perfectly comfortable giving each of you an F. You’ll get what you earn.” Good times, that class. I’m not sure what Professor Castle is up to these days (or if that was actually his name) but he’d probably enjoy dishing out grades for one of the most lopsided team events in golf history. In this edition, extra weight will be given to the first three days, given Sunday’s singles matches were rendered all but moot. Let’s get to it.

Captain America improved to 8-3-1 when paired with Spieth in team events. The legend grows.

Huge energy and played heroic golf. What an encore to a dream season. 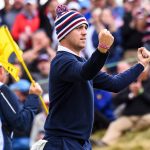 You may also like It took only one team event for Justin Thomas to prove he’s the heartbeat of the U.S. squad

Terrific week. Did much of the heavy lifting early in his matches while his partner Thomas served as closer.

Missed putt on 18 to win Thursday match, but who’s gonna remember that? If this was his last Prez Cup as a player, the final chapter was oh-so sweet.

The Prez Cup rook flashed nerves and toughness while winning 2.5 points with Phil. Ready for a Ryder Cup team.

Cruised along for two sessions with DJ. Smiling all the way.

Indestructible with DJ but didn’t offer much else.

Other half of cool “bash brothers” celebration with Chappell. Went bananas after Saturday chip-in. Failed to clinch Cup in second Sunday singles match.

Went unbeaten in Korea two years ago and battled for everything again this week, including singles-match halve vs. DJ.

Sure, he suffered a disastrous 6-and-5 Friday loss (with Charl Schwartzel), including a rules gaffe that had him DQ’ed from playing a hole. But saved face by drilling key late putts to win a Saturday point, preventing his team from enduring the humiliation of losing the Presidents Cup on Saturday. Picked up another .5 point against Kiz on Sunday. Not bad for a much questioned captain’s pick. Wasn’t as sharp as his sidekick, Grace. Clipped Reed in singles, even though it didn’t matter.

Played with passion but dragged down by poor partners. Beat Spieth Sunday. Better than his record. Did Venezuela proud.

Came up clutch while winning Saturday match. Bonus points awarded here for shushing crowd while trailing in singles match and with team down by 11 points.

Had a few nice moments carrying Day. Hung on for half-point in opening singles match.

Showed grit while carrying Matsuyama to half-point Friday, but that was it.

World No. 7 showed up Sunday ready to play. Too bad the event started Thursday. His career President Cup record is now 4-12-4.

Like his countryman Day, didn’t wake up until Sunday.

Highest-ranked player on the squad sprayed tee shots all over New Jersey for three days. Beat JT in singles when pressure was off. Big disappointment.

What was he supposed to do? Could’ve tried different combos early in week, but none of it would’ve mattered. Handled drubbing with class.