PGA Championship: Best quotes of the week from Quail Hollow 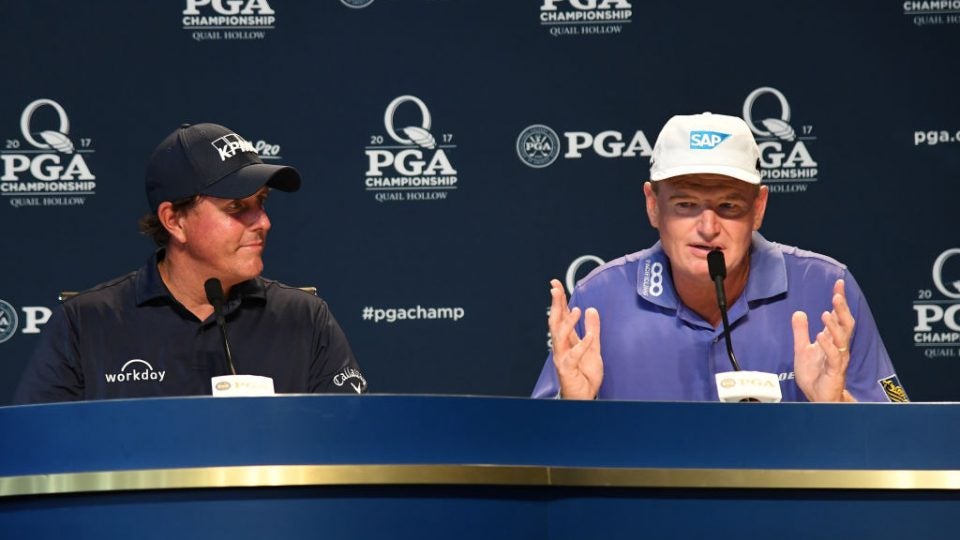 CHARLOTTE, NC - AUGUST 08: Phil Mickelson of the United States and Ernie Els of South Africa celebrate thier 100th major championship during a press conference prior to the 2017 PGA Championship at Quail Hollow Club on August 8, 2017 in Charlotte, North Carolina. (Photo by Ross Kinnaird/Getty Images)

The 99th PGA Championship began this week at Quail Hollow, and Tour pros provided no shortage of witty one-liners, jokes and observations.

Jason Day, on the telescopes given out by Jimmy Walker: “Probably see Uranus from here, mate.”

Jordan Spieth reviews a local restaurant in Charlotte: “Went to Cowfish last night. That place was interesting, really good. I had no idea how to feel going in with the menu, just burgers and sushi. I needed like a 20-minute break afterward to try and figure out what I just ate (laughter), but it was good.”

Phil Mickelson, on his long relationship with Ernie Els: “It’s amazing that we’ve played together and against each other for so many years. It doesn’t seem that long ago from those days, but it sure looks a long time ago.”

Ernie Els, discussing his style at the 1989 Open at Royal Troon: “It was a pretty cool haircut, wasn’t it? Should probably hide that one.”

Rory McIlroy, on the new policy allowing shorts on practice days: “If it was sunny it would be great. Obviously it’s raining out. Still I don’t get why people are wearing shorts. I know it’s pretty warm out there.”

Jimmy Walker, on an unintended consequence of the shorts rule:  “I think the guys are having fun doing it. It’s not like we don’t see each other in shorts. But everybody is razzing each other a little bit. I think there’s some guys that look really good in shorts and some guys that don’t look really good in shorts. It’s pretty funny. I think a lot of untanned legs — you can tell those Florida boys. You know they have been down there soaking the sun up. I’ve been up in Utah and I’ve been overseas for two weeks, wet and cold, so my legs aren’t very tan right now.