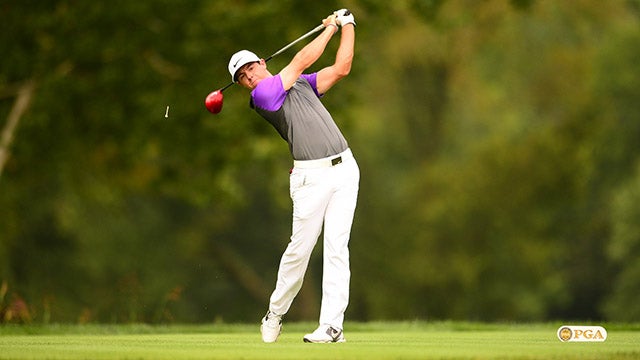 McIlroy has all three of Kostis's keys for success at Augusta.
Fred Vuich

Forget what you’ve heard before. Here are the three absolute musts to winning the Masters.

I’ve been lucky enough to cover the Masters on CBS for 25 years. Prevailing wisdom dictates that in order to win a green jacket, a player must do two things: Work the ball right to left, and putt well. But hey, didn’t Jack Nicklaus win his six Masters by primarily hitting a fade? Now, don’t get me wrong—in certain situations, it’s an advantage to work the ball right to left, and I think that’s one reason why Bubba Watson and Phil Mickelson have done so well in recent years. They’re lefties, so the right-to-left shot is a controllable fade for them, and they can cut the corners on Nos. 10, 13 and 14, which creates a huge distance advantage on approach shots. That said, I believe there are three lesser-known—but extremely important—keys to success at Augusta.

If you want to attack a hole location, you need to be able to exert complete control over your distance, and I mean within a yard or two. Sound extreme? It is! The green complexes at Augusta demand perfection. If your ball ends up on the wrong side of a ridge by even a few inches, it will funnel away into oblivion, and there goes your makeable birdie try. I cannot overstate the importance of distance control.

Driver distance is crucial. The main reason Nicklaus dominated in his day is simple: He drove it farther than everyone else. The farther you drive it, of course, the shorter your iron shot will be into the green, making it easier to master Key No. 1. Also, Augusta rewards extra distance off the tee with flatter, less precarious lies. TV doesn’t do justice to the severity of the sidehill and downhill lies. Take No. 9: A long hitter can drive his tee shot to the bottom of the hill. That means that not only is he not faced with an uphill shot from a downhill lie, he also has a shorter club in his hand that he can hit higher, which gives him a better chance to land his shot softly on the green. The same goes for No. 10. There are lots of situations where big drives let you escape the most difficult uneven fairway lies that shorter hitters face. At Augusta, short is not sweet off the tee. PHOTO

Strong legs are critically important in the swing. Uneven lies make it difficult for many players to maintain balance and the quality of the strike, and strong legs help a lot with balance. Nicklaus had big, strong tree stumps for legs, and that helped him. Arnold Palmer’s legs were plenty strong, too, and he also used his massive upper-body strength to help muscle the ball off hanging lies. Players who have difficulty keeping their legs “underneath them” in the swing will have more problems with the uneven lies.

So, based on these keys, who’s my Masters favorite? It shouldn’t be a big surprise: Rory McIlroy. His driving is magnificent (he’s long and fairly straight), he’s got powerful legs, and he’s matured enough to handle the pressure of winning the one major that’s eluded him.

I’ll add another thing: The only way a shorter hitter is going to win the Masters is if inclement weather makes the par 5s three-shot holes rather than eagle chances. If this happens—as it did in 2008, when Zach Johnson won his green jacket—shorter hitters who excel at hitting wedges might have a chance on this long, tough course.

While the short game will always be important for salvaging pars and keeping momentum going, you won’t chip and putt your way to victory at Augusta. This is a second-shot course. To score well, you have to hit it the right distance to the right section of the green, and with their shorter approach shots, the big bombers will have a big advantage.

KOSTIS TIP: DIAL IN YOUR DISTANCES

When recreational players go to the range, they tend to spend a lot of time practicing directional control. But distance control is every bit as important. Tour players can control their approaches to within a few yards of their targets. For most everyday players, the margin of error can be 10 yards or more! My advice: When you practice, focus on a target line, but chart your iron distances to see how far they really travel. That way, you’ll improve your distance control as well as the directional quality of your approach shots.