Only Augusta would open the world’s most luxurious media center, because why not?

AUGUSTA, Ga. – It’s hard to describe the size of the new media center here, but imagine President Trump’s border wall, only larger and more expensive. From my leather seat in the main work area – which is called the “arena” and may have its own zip code – I can check out the two screens on my desk, admire the commemorative plaques on the stone walls, or look out through the two-story windows at the driving range, knowing my belongings are locked in my personal storage locker, which is right next to my own trash can. That’s a nice touch. I was so tired of sharing a trash can.

There is a full-service restaurant to go with the walk-up food counter. The TVs on the walls are not just enormous; some of them are framed. The restrooms have attendants, and there are locker rooms with showers. Showers! I know sportswriters who don’t use the showers in their hotel rooms, and now we have them in the media center.

This place is so luxurious that even Augusta National members are jealous. Bill Gates just knocked on the door and asked if he could come in and write a sidebar.

We have reached the point in this column where readers are wondering how to FedEx me their vomit. I understand. Nobody wants to hear how good sportswriters have it. Sportswriting is a cushy job, and on some days, calling it a “job” at all is a linguistic felony.

Q. How do you earn a living?
A. I watch football games. And then I write what I think about them.
Q. Elsewhere in the world, coal is being mined, children are being taught and hearts are being transplanted.
A. (drops head in shame)

So I get it. Completely. You don’t want to hear sportswriters talk about how good we have it. But that’s not why I’m writing this.

The new media center says so much about Augusta National. See, nobody else does anything like this. The Masters is special for many reasons, but the biggest is this: It is designed to be special. Special is the driving force. For more than 80 years, the members have done everything they can to make the tournament stand out, from the concessions to the limited commercial time to the green jackets that their wives would not let them wear to any other social occasion. A lot of sporting events produce revenue; only a special event would take pride in turning down revenue. 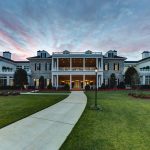 You may also like PHOTOS: Tour the Masters’ breathtaking media center

You can call the Masters the best golf tournament in the world, and some golf fans would argue, but the argument misses the point. The Masters transcends its sport. Exclusivity is its allure. It’s not: The Best Tradition in Golf. It’s: A Tradition Unlike Any Other. The green jacket is cool because nobody else gives one away. If you saw one of those pimento cheese sandwiches at your local Kroger, you would probably pass. But here? The fans – excuse me, the patrons – can’t get enough.

Pebble Beach is an amazing course with much prettier views, but ask most golfers which course they would like to play, and the overwhelming first choice will be Augusta National. There is cachet to telling your friends you played Augusta National. This is also why so many extremely powerful people want to be members here. It’s not just because they want to try to reach the 13th green in two. It’s because nobody asks to see the membership list at Pine Valley.

When Augusta National chairman Billy Payne sat down in the new, enormous, perfectly appointed interview room Wednesday, with azaleas in a row in front of him, I sat in yet another leather chair and looked around. Every seat has its own microphone; no need for a worker to walk around with one any more. There are microchips in each media credential, alerting the moderator to our identity, so that we get called on by name. (And of course, this allows them to not call on certain people if they choose.)

I’ve covered some Buick Opens in my day. This was not like that.

Augusta National wants everybody to feel like they are experiencing something they can’t get anywhere else. Payne said they built it out of “the principle of constant improvement. We know no other way.”

Augusta National would never announce a cost of a project like this; that would be unseemly. But I’ve heard and read speculation that it cost more than $50 million, and that’s highly believable. It was also unnecessary. Augusta National did not have to do any of this. Before this new media center was built, if you had asked most sportswriters to name the sporting event that treated them best, you would have heard one of two answers. The first would be “The Masters,” and the second would end with “but I’ve never covered the Masters.”

We had our own building. (Most tournaments have tents or temporary facilities.) Food was available at all hours. Media parking was ridiculously close, but hey: no need to walk! Shuttles were plentiful. And sure, you always had to play by their rules – watch where you walk, leave your cell phone by your seat – but at every turn, the Augusta National folks would remind you that sportswriters from Herbert Warren Wind to Dan Jenkins to Dave Kindred helped make the Masters what it is.

Many journalism outlets have stopped covering golf; it’s expensive, and it doesn’t have the deep penetration in most markets that the local pro or college team does. But many will continue to cover the Masters, because the Masters is not really thought of as a golf tournament. It’s the Masters. It’s different. You feel it all around the course, from the green walkways to the perfectly mowed grass that isn’t even part of the course, all the way to this gargantuan and beautiful media center.

This media center will be part of the place’s aura – not just for journalists, but for some fans, too. As I think about it, I believe this is the first time I’ve ever written about a media center. And it’s probably the last … until Augusta National builds a bigger one.