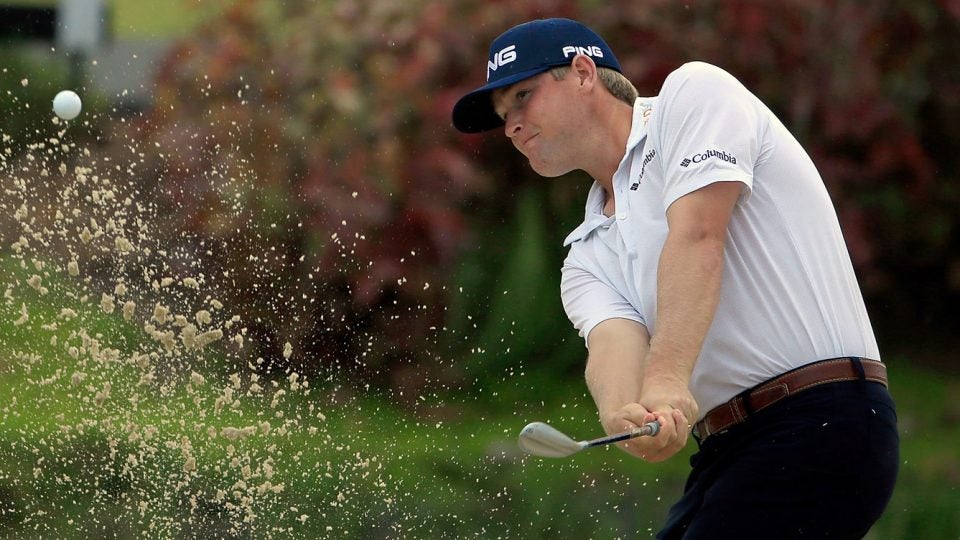 Trey Mullinax hits out of a bunker during the first round of the Puerto Rico Open.
Getty Images

RIO GRANDE, Puerto Rico (AP) — Five days after getting married, Trey Mullinax ran off nine birdies and saved par with a 15-foot putt on his last hole for a 9-under 63 to take the lead at the Puerto Rico Open.

The first round Thursday was suspended when showers turned into heavy rain at Coco Beach Golf & Country Club and the course was too wet to continue.

Mullinax was coming off consecutive missed cuts in Florida when he got married Saturday to Abi Essman, whom he has dated since high school. Several of his Alabama teammates were at the wedding in Birmingham, Alabama, including Justin Thomas.

And then it was off to Puerto Rico, and Mullinax posted his best round of the year. He had a one-shot lead over D.A. Points.

“Obviously, to shoot the score I shot today you have to putt well,” Mullinax said. “But it was nice to hit the ball like I feel I’ve been playing. I feel like I’ve been hitting the ball well, just haven’t been scoring. But today I hit the ball nice and it was a good result.”

Points finished his round of 64 with a 9-iron that he holed from the ninth fairway for an eagle.

“Today was the calmest day I’ve ever seen here, so it was pretty much a perfect 9-iron,” he said. “I knew I had a little backstop and I could hit it as hard as I want, and I threw it 149 yards and it spun back and went right in.”

It was an important start for Points, who has a low priority this year on the PGA Tour and has had trouble getting into tournaments.

He last played seven weeks ago at Pebble Beach, where he won in 2011 with Bill Murray as his amateur partner. Points has tried Monday qualifying for some PGA Tour events.

“I’m proud of myself for not just sitting on my butt and not doing anything,” he said. “I’ve been playing and practicing and trying to stay sharp and I think that paid off today.”

Former Las Vegas winner Bill Lunde, playing for the first time in five months, and Xander Schauffele were at 65. The group at 66 included Harold Varner III, David Hearn of Canada and Jonathan Randolph, who still had three holes remaining.

The first round was to resume Friday morning.

Former Puerto Rico Open winner Scott Brown was at 67. San Juan native Rafa Campos was at 5 under with four holes remaining when the rain arrived. A year ago, Campos opened with a 64 and eventually tied for eighth.

The Puerto Rico Open is opposite the World Golf Championships event in Texas this week, meaning a winner does not earn an automatic spot in the Masters. Wesley Bryan would need to win to have any chance of moving into the top 50 in the world ranking and qualifying for Augusta National.