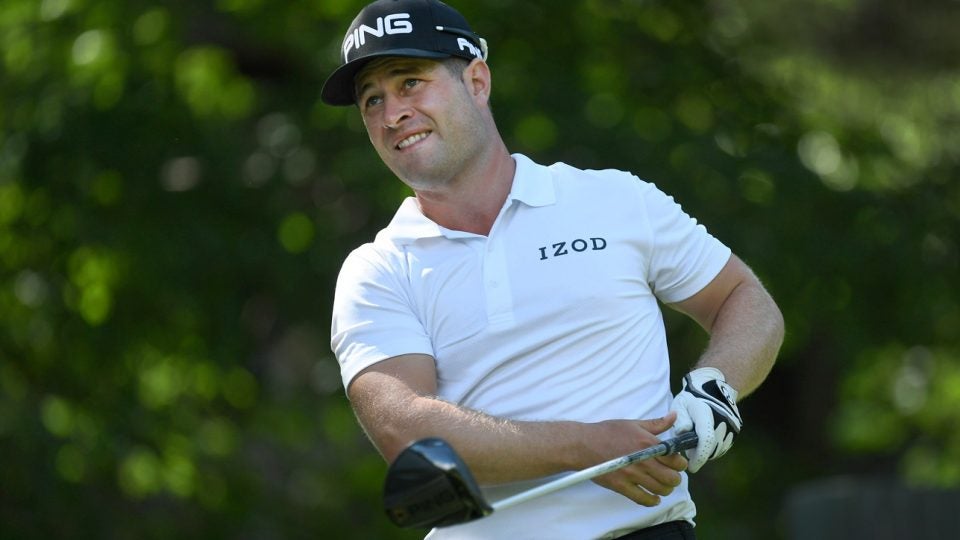 David Lingmerth plays a shot on the seventh hole during the third round of the Quicken Loans National at TPC Potomac.
Getty Images

POTOMAC, Md. (AP) — David Lingmerth waved his arm disgustedly to the right to warn the gallery after he blocked his tee shot on the tight par-5 10th hole at TPC Potomac. After two shots from the rough, one from a hazard and one from a bunker, he made a 6-footer for bogey to fall to 3 over for the day.

He was still tied for the lead. Minutes later, he led by himself again when Daniel Summerhays bogeyed 11.

It was that kind of day at the Quicken Loans National.

Lingmerth steadied himself after his adventure on 10 and made an aggressive swing with a driver that came off perfectly on the short par-4 14th, leading to a two-putt birdie. The 29-year-old Swede made a sloppy bogey on 17 and managed a 3-over 73 to drop to 7 under and maintain a one-shot over Summerhays.

Spencer Levin, who teed off two hours ahead of Lingmerth, was alone in third at 5 under after the best round of the day, a 65.

There was little wind Saturday, and the greens were softened by a thunderstorm that caused a 90-minute delay, but TPC Potomac played as difficult as ever, showing as much bite as its storied neighbor, Congressional. Saturday ended the same way the first two rounds did — with Lingmerth atop the leaderboard.

Lingmerth, who came from behind to win a Web.com Tour event at TPC Potomac in 2012, has a chance to go wire-to-wire for his second PGA Tour victory.

“I haven’t had the wire-to-wire scenario in my career, but a lot of great players have won tournaments that way and I would like to do it as well,” he said. “I’m kind of feeling like I’m up for the challenge.”

Lingmerth relied on a fade to avoid trouble off the tee while starting the tournament with back-to-back rounds of 65. On Saturday, it didn’t take long for his go-to shot to abandon him. He yanked his opening tee shot into a fairway bunker, leading to bogey. It was one of four tee shots he missed to the left in the first eight holes, including a driver in the water on the narrow par-4 fourth.

Still, no one managed to get ahead. Geoff Ogilvy’s putter went cold and he didn’t make a birdie in a round of 74. He was still just three shots back, along with a fellow Australian half his age, Curtis Luck, who shot 67, and South Korean Sung Kang, who shot 71. Kyle Stanley and Charles Howell III both shot 67 and were four shots back.

Just 17 players were under par after three rounds.

Summerhays was solid from tee to green but couldn’t get many putts to fall. His only chance to win this season came at the Memorial, where he led by three shots after 54 holes but shot a final-round 78 to tie for 10th. He’s earned $8.4 million in 188 career PGA Tour starts without a victory.

“I struck the ball extremely well,” he said. “I’ve had a lot of great looks, so maybe I just need to persuade that ball into the cup a little bit more.”

Levin has been the PGA Tour’s iron man this season, with little to show for it. He’s making his 25th start and has teed it up in every event he’s been eligible for, making only 10 cuts and failing to record a top-20 finish. At 176th in the FedEx Cup standings, he’s in danger of losing his tour card.

“It was the best round I’ve had all year by far. It’s been a tough year, but the putts have been going in this week, which is obviously why I’m playing well,” Levin said.

Levin, who first gained attention as a cigarette-smoking amateur at the 2004 U.S. Open at Shinnecock Hills, has played in 232 events in his PGA Tour career, with his best finish a runner-up in 2011. That was also the year he played in his only British Open.

“I’ve had a chance and have never won, so if I don’t, it wouldn’t be anything new,” Levin said. “But I’m going to go out there with a different mindset. I’m going to try and make putts and see if I can’t do it.”

Even if he doesn’t win, he could earn one of four spots available at this event for the British Open at Royal Birkdale. No player inside the top 18 going into the final round is currently eligible for golf’s next major.