Another day, another rules debacle. This time, though, some high-profile Tour players are adding their takes via social media.

The issue? Newly enacted Rule 10.2b(4), which declares that “once the player begins taking a stance for the stroke, and until the stroke is made, the player’s caddie must not deliberately stand on or close to an extension of the line of play behind the ball for any reason.”

It was less than a week ago that Haotong Li was controversially penalized two strokes for violating this very rule on the European Tour— and the social media censure was swift. Pros chimed in from around the world condemning the ruling. Now, another player has been penalized, and this time it was stateside, at the Waste Management Phoenix Open. 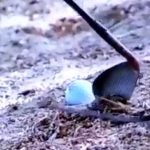 Twitter user Brad Schneider first brought the issue to light by posting footage from NBC’s Round 2 broadcast, which showed Tour player Denny McCarthy and his caddie sizing up a shot.

This is even worse than Haotong Li!! Y’all did my boy @_dennymccarthy dirty!! Practice swings, no intention to hit the ball, lines HIMSELF up, AND THEN GOES INTO HIS STANCE… get outta here @PGATOUR @WMPhoenixOpen pic.twitter.com/sbBbsaaLjl

The footage shows McCarthy taking practice swings as his caddie stands behind him. His caddie then moves away, and McCarthy steps off his original address position and resets himself. McCarthy was penalized two shots for violating Rule 10.2b(4).

Schneider’s tweet quickly went viral, garnering tens of thousands of views and dozens of fans and high-profile players chiming in with their dismay. Most notable among them was Justin Thomas, who called the ruling “ridiculous” and “mind blowing.”

This is ridiculous… the fact this is a penalty is mind blowing. @USGA this NEEDS to be changed ASAP… there is nothing about this rule that makes the game better https://t.co/wtPmPOcss4

Shut the front door… He got penalised for this?!

This can’t have been a penalty surely??

Golf Channel’s Ryan Lavner contacted McCarthy, who revealed that the crux of the issue was that he had assumed a “golf posture” near the ball.

Just talked to Denny McCarthy. It was a 65-yard shot. Said he’s “never had a caddie line me up” and was told he was penalized 2 shots because he had assumed a “golf posture” near the ball. Seriously. https://t.co/AjZrAv3O8F

According to the wording of the rule, if a player takes a stance and his or her caddie is standing in an extension of the line of play, even a reset is not enough to avoid the penalty (the putting green being an exception). The problem, it seems, is that the interpretation of the rule has some gray area when it comes to what it means to take a stance, as highlighted by Twitter user Brandon.

???? guys… I just got sent this… so stupid but it does seem like a penalty given the interpretation… the rule needs some SERIOUS WORK. ESPECIALLY when a guy backs off and has to go through his entire setup process again by himself! This is beyond brutal. pic.twitter.com/87uT1ac2FM

The USGA’s reasons for updating the rule state that a “player’s need to use his or her own alignment skills and judgment” is a fundamental skill, and allowing a caddie to stand behind a player taking a stance undermines that skill.

Whether or not there will be future clarity on this issue remains to be seen, but it’s likely caddies will start to be more mindful of their positions going forward. 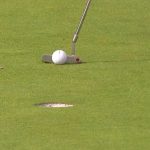