NORTON, Mass. — As the wind kicked up and the shadows grew long on New England’s unofficial last day of summer, the final round of the Dell Technologies Championship turned from a shootout to a survival test. Justin Thomas was the last man standing; he outlasted Jordan Spieth and Marc Leishman to win for the fifth time this season and cement himself as the player of the year.

If Sunday’s 50-degree drizzle served to remind the locals of the weather they have to look forward to in the coming months, Monday paid homage to the summer that has been; when the leaders teed off, it was 80 and nearly still, setting the stage for early fireworks.

For most of the front nine, it seemed as though this was destined to be Spieth’s day. When the world No. 2 got off to a preposterous birdie-eagle-birdie-birdie start, he actually found himself in possession of the outright lead, two shots clear of his longtime buddy Thomas.

Then it seemed like the event was Leishman’s to win. The affable Aussie effortlessly birdied four of the first five holes and made a neat up-and-down for birdie on the par-5 7th to take the lead back from Spieth. When a nine-footer for birdie caught the edge on the 9th, he turned in six-under 30 and two shots clear of Spieth and Thomas, who had shot four-under 32.

“I got off to a pretty good start and it was like I wasn’t even there,” said Thomas, who had gone from the hunted to the hunter.

But Leishman stumbled with bogeys on the first three holes of the back nine, and Spieth made two bogeys of his own to leave the door open. 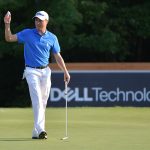 You may also like Tour Confidential: Where does JT’s season rank among the best in the post-Tiger era?

TPC Boston was an appropriate setting for a chase. The sprawling layout’s front nine winds through the wooded property like a maze, and Thomas and Leishman could hear the roars echoing out in front of them as birdies and eagles set the pace. Fans could easily keep track of their favorites, too, as Rickie, Phil, DJ, Rahm, Spieth and Thomas were all in the final hour of tee times. And while the layout has several awkward cross-country traverses to get from one hole to the next, it crescendoes nicely on holes 16, 17 and 18, which border the clubhouse and ultimately served as Thomas’s coronation.

Thomas stuck a wedge to three feet for birdie on 15, which meant that he arrived at the 16th tee with a two-shot lead. The 16th is guarded by water short and a Michelob Ultra-fueled stadium long; when Thomas poured in an eight-foot par putt to maintain his lead, the Boston crowd — a sea of Red Sox hats and Tom Brady jerseys — roared with delight. Thomas seemed to recognize the enormity of the moment, too: he took a moment to himself on the back of the green, muttering “C’mon!” and pumping his fist. When Leishman and Spieth, out of gas, finished with bogeys, two finishing pars gave Thomas a three-shot victory.

The 24-year-old, who climbs to No. 4 in the World Ranking (“I did? That’s cool,” he said afterwards) has gotten used to chasing Spieth’s accomplishments, and this is the first year Thomas’s professional resume has bettered that of his longtime friend. The two grew up playing together. Was he jealous of Spieth’s Tour accomplishments, which came faster and more easily?

“Definitely,” Thomas said. “Any time any of my friends win and I don’t, I’m extremely happy for them, I’m pumped for them, I’m excited but I’m jealous. I wish I had three majors right now. I wish that I had holed out a bunker shot at the Travelers to win.”

Both Spieth and Thomas recalled their first head-to-head battle: an AJGA event at Walnut Creek where the two 13-year-olds dueled it out. They’ve been trading blows ever since.

“I would say we’re very close friends just because of the time we spend on and off the course together,” Spieth said. “We can share experiences with each other that we can’t really describe or explain to anybody else that’s our age, or very few, I should say, and it creates a unique relationship.” They’ll be teammates again in three weeks at the Presidents Cup, where Thomas said he’d love to have Spieth as a partner. In the meantime, the playoffs roll on; the friends will have two more chances for a showdown. But the endless summer of the PGA Tour can wear on players, and Thomas said he’s going to relish the week off in the meantime.

“I’m tired,” he said. “So I’m excited to go home and not touch a club for a couple days … and once that week comes, then I’ll be hopefully ready to go.”

In the end, it was Thomas on top at 17 under, followed by Spieth at 14 under and Leishman at 13 under. Nobody else seriously contended, although Paul Casey and Rahm finished just a shot further back. Dustin Johnson no-showed his way to a 73 that left him in a tie for 18th, and the pairing of Adam Hadwin and Grayson Murray turned in 73 and 77, respectively, to fall out of the picture.

Phil Mickelson shot 68 in his final audition for a captain’s pick for the Presidents Cup.

“I think that this is a big step for me as far as getting back to where I want, shooting the scores, playing, having energy, being able to practice, all these things,” he said. “It was a good start.”

Mickelson didn’t say what he would tell Cup captain Steve Stricker when they spoke later in the night.

Fans lingered by the 18th hole as night fell Monday, soaking in the last of the long weekend. Life is good in Boston: the Red Sox are in first place, after all, and the Patriots season kicks off Thursday. Thomas, a Pats fan himself, comfortably fielded questions and signed autographs late into the cool September evening; he’s gotten accustomed to winning and all that comes with it. As for keeping up with Spieth?

“I think we’ve kind of pushed each other at every level,” he said, citing junior golf and collegiate competition, and now the action on Tour. “It’s just now we’re at the top level you can get. And our competing—it’s really cool. It really is.”