Consider this dispatch an early welcome and cheat sheet for the 99th PGA Championship, to be played at the Quail Hollow Club in Charlotte. We start with a weather and course-condition forecast:

A prolonged period of storms and high humidity. A soft course. Expect big divots and low scores. The heat will not be oppressive, and if you’re watching from the comfort of your air-conditioned media room, there might even be a hint of autumn chill.

If you are there on site, or if the TV camerawork is good, check out the leg action of the game’s best players. It is hard to see when they are wearing pants. But in shorts you can see how right-handed Tour players swing into a bent right knee, and the PGA of America is permitting the players to wear shorts during the practice rounds.

You can also see something else you never saw in Lee Trevino’s day. (He won PGA Championships in 1974 and ’84.) The most athletic of the modern players swing into a straightened left leg, as Trevino explained this to David Feherty in a recent Golf Channel interview for Feherty’s eponymous show. Trevino and his long-panted Sansabelt crowd—the cloth was so thin and tight you could see some knobby knees protruding through it—swung into a left knee that was bent. And that is why, in Trevino’s opinion, there are so many more left-knee issues and hip issues among today’s players. In this regard, you might pay particular attention to Jason Day, Rory McIlroy and Dustin Johnson. You might compare them to Zach Johnson and Jordan Spieth and Davis Love III, who have softer left-leg positions. Except it is most unlikely that DLIII will play a practice round in shorts. He owns shorts. It’s just impossible to imagine him wearing shorts at a major championship, even in a practice round.

The big excitement in the press tent (aka, the Media Center) on Tuesday will be the joint appearance of Ernie Els and Phil Mickelson, each of whom is playing in his 100th major championship this week. A further bond between these two Hall-of-Famers is that they both have daughters, and each is a first-born, who graduated from high school this year. Amanda Mickelson and Samantha Els have hung out at scores of tournaments over the past 18 years, and now they are both preparing for college. Amanda is going to Brown. Sam is going to Stanford. Yes, they both have smart mothers. As for the fathers, between them they have a career grand slam, well over a 100 wins around the world in events large and small and are two of the most popular figures in the game. They are both large men with big-muscle swings that have endured forever. They are both 47, but Ernie’s the old guy—he has Phil by eight months. 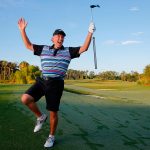 You may also like Catching up with Forrest Fezler, the pro who wore shorts at the U.S. Open

On Wednesday, the PGA of America’s Big Three—Pete Bevacqua, Paul Levy and Kerry Haigh—are expected to announce that the PGA Championship, which has been played in August for decades, will move to May. The likely first year for a new springtime PGA Championship is 2020, when the PGA Tour’s summer schedule and the Olympic golf schedule will again come in conflict. The 2020 PGA Championship is slated for Harding Park in San Francisco. May is often a spectacular time in San Francisco, dry and sunny and cool. The Summer Games are in Tokyo, starting in late July.

If that move happens, the PGA Tour is expected to return the Players Championship to March and the Tour will play the FedEx Cup events in August, before the start of the NFL regular season. [Editor’s note: It was reported on Monday afternoon the PGA is moving to May, and Bevacqua and PGA Tour commissioner Jay Monahan will be available for questions Tuesday.]

On the first day of play, on the 10th tee and at 8:25 a.m., Jordan Spieth — along with the new Masters and U.S. Open champions (Sergio Garcia, Brooks Koepka) — will begin his effort to become just the sixth male professional golfer to win the modern career grand slam.

Spieth is newly 24. He’s already had a Hall-of-Fame career. But getting a career grand slam is the next mountain in his life for him to climb, and it dwarfs that giant dune you saw him on at Royal Birkdale last month. His quest for the career grand slam will increase the attention paid to the events at Quail Hollow.

The five men who have done it are the greatest of legends: Gene Sarazen, Ben Hogan, Jack Nicklaus, Gary Player and Tiger Woods. Spieth won the 2015 Masters and U.S. Open, plus this year’s British Open. So Quail Hollow represents the first PGA Championship of the rest of his life. And it may take years and years to get it done, if he ever gets it done. 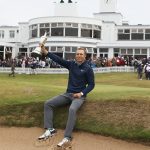 You may also like Grand slam winners: The fab 5 who claimed the sport’s ultimate prize (and the 3 others who are a win way)

Among guys still swinging in anger, there are three players who are 75 percent of the way there. Mickelson has won five major titles, but has famously never won a U.S. Open. McIlroy has four majors but no green jackets. And now comes Spieth.

Woods was 24 when he completed his first career grand slam, which he did at the British Open at St. Andrews in 2000, by eight. Spieth would be an even younger 24. Spieth and his playing partners will assemble on the first tee for the second round at 1:35 p.m. Nobody has ever won a PGA Championship on a Friday afternoon, except for maybe Tiger in 2007, when he shot a second-round 63 in the intense Tulsa heat. (Yes, he had only a two-shot 36-hole lead, but do you think any of the gents, this side of Woody Austin, thought they were actually going to beat Woods over 72 holes? Not likely.)

Friday may be a good day to turn your (at-work?) attention to McIlroy, who goes off the 10th hole at 8:25 a.m., playing with Jon Rahm and Rickie Fowler. McIlroy, winner of the 2012 and 2014 PGA Championships, has won two Tour events at Quail Hollow. He has won all four of his major titles on long, soft courses. Quail Hollow should have him chomping at the bit.

Today will be a good day to get out the sports section—you still get a morning paper, don’t you?—look at the agate type deep in it and see if any of the 20 club pros playing in the PGA Championship have made the cut. You might know some of the names trying to do so. Omar Uresti, a former Tour player, is in the field as a club pro. Mike Small, who has been the golf coach at Illinois since 2000, is too. You wouldn’t likely know the name Dave McNabb, but you surely would if you were a member of the club where he works, Applebrook Golf Club, on the outskirts of Philadelphia. If McNabb, who can flat-out play, makes the cut, you won’t have to look for his name in the agate type of The Philadelphia Inquirer. He’ll get a write-up. Or you can just go to your favorite golf website and do that Control F thing, and look for a name you know that way. In any event, club pros — the 28,000 men and women of the PGA of America — are an elemental part of the PGA Championship and what makes it fun.

More fun. Sunday is FUNDAY at Quail Hollow Speedway! By nightfall on Sunday — Lord willing and the creek don’t rise — somebody is going to hoist the 27-pound Wanamaker Trophy in the moist Charlotte summer air. Last year, it was Jimmy Walker doing the heavy lifting. In 2009, it was Y.E. Yang. (Ask Tiger about that one.) In 2003 it was Shaun Micheel. Back in ’80 — and ’75, ’73, ’71 and ’63 — it was Big Jack. You want to win the career grand slam, you have to win the PGA Championship. Nicklaus has three career grand slams. Woods does, too. Amazing. One guy and only one guy is looking at this week for his first. Good times.