Jason Dufner out front at RBC Heritage after 54 holes 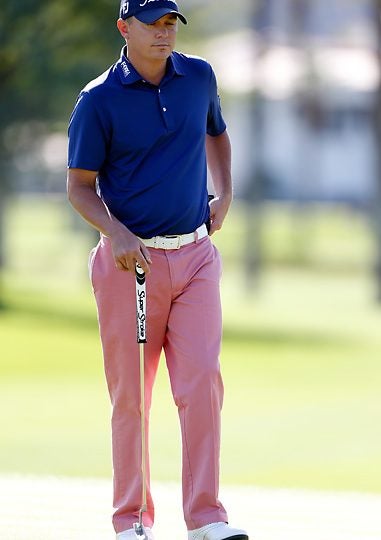 Jason Dufner shot an impressive 66 on Saturday at the Tour Championship but he still trails Stenson by 11 shots.
Getty Images

HILTON HEAD ISLAND, S.C. (AP) — Jason Dufner had two eagles on the way to a 6-under 65 and a one-shot lead Saturday heading into the final round of the RBC Heritage.

Dufner started three shots behind co-leaders Graham DeLaet and Luke Donald. But the 2013 PGA Championship winner quickly closed that deficit with eagles on both front-nine par 5s at Nos. 2 and 5. He also birdied No. 15, Harbour Town Golf Link’s other par 5 as part of a three-birdie run that put him in front at 13 under.

DeLaet was second after a 69, the Canadian’s third straight sub-70 round after having just five in five previous appearances here. Kevin Kisner and Webb Simpson were at 11 under. Kisner shot a 66, and Simpson, the former U.S. Open champ, had a 68.

Dufner got his round going with the early eagles. He blasted a 215-yard approach on the second hole to 11 feet for his first eagle. He was short of the fifth green in two, then chipped in from about 100 feet for his second eagle.

Dufner plays Harbour Town often, but without much success. His best finish was a tie for 14th and only once in seven previous fourth rounds has shot in the 60s. He is chasing his fifth PGA Tour title — and just the second since winning the Wanamaker Trophy at Oak Hill four years ago.

DeLaet played a steady, workmanlike round to keep himself in the mix for his first career tour victory. It appeared some nerves might be in play when DeLaet three-putted No. 1 for a bogey. But he rebounded a hole later to retake the lead.

DeLaet caught Dufner at 13 under on the 15th hole, but fell back on No. 18 when he three-putted from 35 feet for a bogey.

The waggle. The shot. The putt.

Kisner followed up his 64 with a second straight bogey-free round at Harbour Town. The last of his five birdies — a 30-footer on No. 17 — pushed him into the tie with Simpson.

Simpson was the hottest player on the course when the round began, going 4-under over his first six holes including an eagle-3 at the par-5 fifth. Then Simpson cooled off, with 11 pars and a bogey on the 16th that dropped him two shots behind.

Ian Poulter, in a chase to stay on tour, shot 69 to stay in fifth. He had three birdies on the final five holes before the turn to share the lead with Simpson for a time. On the 10th hole, however, he hit his drive left in the water, then landed his second tee shot along the water line where an alligator — perhaps miffed by the first water ball — stared down the Englishman known for his colorful outfits. Poulter tried to set up, but the gator would not relent until the caddie of playing partner Simpson charged the reptile.

The alligator retreated to safer waters and Poulter took double bogey. Poulter, playing on a medical extension, needs to earn $145,000 of 117 FedEx Cup points over the next two weeks to keep his playing privileges intact. He’s in good because fifth place pays $260,000.