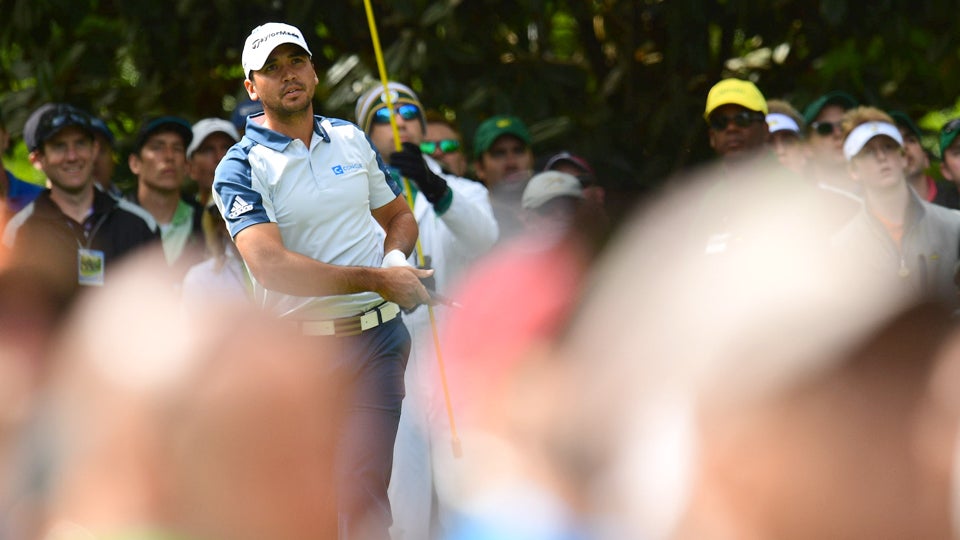 SAN DIEGO, Calif.—The line of succession is starting to form. The old news is, Tiger Woods and Phil Mickelson are done dominating golf. If we’re lucky, they’re not quite done winning but that’s not looking good these days.

Tiger limped off Torrey Pines here (OK, he rode in a cart) after 11 holes with non-activating glutes. (Are you sure he didn’t say flutes? That would change everything.) Phil slinked off Torrey Pines dragging his putter between his legs metaphorically. Lefty can’t putt and at 44, that’s a serious warning shot across the bow.

Rory McIlroy of Northern Ireland is the new king of the hill and he’s likely here to stay. The identity of just who is going to challenge him, however, is starting to get clearer. The nominees are coming in mass quantity.

Dismiss any of them at your own risk—from Jordan Spieth to Rickie Fowler to Brooks Koepka to Patrick Reed–but Jason Day showed Sunday at Torrey Pines that maybe, just maybe, he’s your best bet to be No. 2. He survived a four-man playoff to win the Farmers Insurance Open, hitting a manly 5-iron shot into the sun on to the par-3 16th hole and making par to defeat J.B. Holmes. Even better, Torrey Pines was a beast, giving up only six scores in the 60s in the final round thanks to a combo platter of thick rough and defiantly firm greens. Best of all, Day wants it. He wants it all. He wants to win tournaments and he openly wants to be No. 1 in the world.

When was the last time you heard anyone realistically say that? Not during the Tiger Era. What was once sacrilege is now—well, it’s not sacrilege but expecting to catch Mr. McIlroy is optimistic, to be polite. Day is 27 and yes, he’s got all of three PGA Tour victories now. He thinks he’s ready for his closeup, Mr. DeMille, and is actually irritated that his big year didn’t happen last year when he suffered a thumb injury not long after winning the World Match Play title.

Day has already shown that he has a big game and can play the big tracks. He’s got five top-four finishes in major championships, including a runnerup finish in the Masters and the U.S. Open. He’s aiming higher now.

Asked in the winner’s press conference if he was familiar with Tiger’s famous “second place sucks” line, Day laughed. “Well, he’s got 79 wins. Of course second place sucks. Like Ricky Bobby says, ‘If you ain’t first, you’re last, ‘I guess. We’re all striving to try to win tournaments. You’ve got to win.”

Embracing the chase for No. 1 is the second piece of the puzzle. The first is having the ability. Day appears to have that covered. And he’s already got experience under the gun in majors.

It was his failure in the Masters two years ago that helped him hang in to win at Torrey Pines. His revised philosophy is that when fear arises, don’t shy away from it, run toward it. Call it a concept for winners.

“It was 2013 when Adam Scott won and I had the lead on the 16th hole,” Day said. “I wanted to be the first Australian to win the Masters. It just got me, it really did. I felt like I was tensing up and didn’t know how to handle it. I didn’t know how to calm myself down and focus on what I needed to do to get the ball in the hole. That’s where I bogeyed 16 and 17, which took me out of the tournament.”

You can’t practice those feelings, those situations. You have to live them and, with luck, learn from them. That’s what Day did Sunday.

He’d just holed a 40-foot crazy birdie putt at the 16th hole to get in the mix but found himself with a plugged lie in the greenside bunker at 17 and no way to get close. He relied on those feelings. “It didn’t look like it on 17 but I holed the putt this time,” he said. “That’s where you learn.”

So Day has already tasted some close calls and some adversity and he doesn’t care for the taste. He said he’s always been very motivated to win but this year, it’s different. It’s turned up another notch. “I really want to kick butt this year,” he said bluntly. “I’ve come so close so many times to having great years. I want to not only have a great year this year but I want to achieve that No. 1 spot. That’s obviously going to be very tough. I’ve got to keep working.”

That’s where the landscape of golf has changed. The certainty of Tiger at No. 1 forever is gone. His reign was one of demoralizing greatness.

That’s done. McIlroy, well, he makes winning look awfully darned easy, too. But he’s not infallible. Not like Tiger was.

Charles Howell III, who once upon a time was briefly hailed as a Next Tiger type when he came out of Oklahoma State University, is now a veteran. Where did the years go? Chucky Three-Sticks, as some fellow tour players call him, is somehow 35 already. He didn’t have a devastating short game that the pro tour requires and, thus, never approached the elite level. He’s won just twice, the last time in 2007, and he’s never been on a Ryder Cup team. He had an excellent week at Torrey Pines, just missing the playoff by a shot and tying for fifth. But he’s seen the paradigm shift on the tour—out with the old, in with the new. Or to be correct, in with the newest of the new, youngsters in their early 20s like Spieth and Justin Thomas and Koepka and a few more to come.

“I played with a kid the other day who said he was born in 1990,” Howell said. “It’s just incredible. These young players are extremely good and ready to win at a young age. A lot of my generation were used to getting our heads bashed in by Tiger, where these guys don’t seem to be afraid of anything. They motivate people my age, for sure. Where Tiger used to be the motivating factor, these young kids are now.”

The younger players are threatening to raise the bar for the level of play and the older players—you can hardly call Howell an older player at 35—are feeling it.

“I played my first tournaments in 2006 and Tiger was still dominating,” Day said. “The game is changing now, evolving into a bunch of young, tall, big, strong-looking guys who hit it a mile and have fantastic touch. It’s getting tougher. It’s really tough to win out here.”

So when golf loses Billy Casper, a great player who won 51 times, it’s not going to see another like that, maybe ever. Mickelson has had an exceptional career during the Tiger Era and somehow piled up 42 wins. Plenty of recent Hall of Famers haven’t even sniffed 20 wins.

That’s how the game is changed. The equipment is better, the fitness is better, the agronomy is better, the money is better (probably so good it becomes a disincentive) and the depth of talent is better. That makes it more difficult to win, yet Woods and Mickelson displayed their true greatness and eclipsed their generation by miles.

This next group? We’ll have to wait and see. Day is ready to scratch and claw for every win he can manage. He’s got the attitude. Is he ready to challenge McIlroy? Check back in a few months.

Whatever McIlroy is doing these days, though, a look at the current state of the game should tell him there’s one thing he shouldn’t be doing—slacking off. To re-cast the PGA Tour’s own slogan, These Young Guys Are Good.