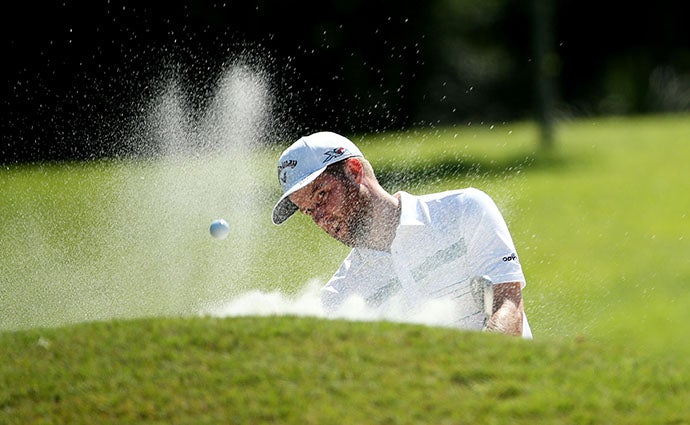 Chris Kirk plays a shot from a bunker on the eighth hole during round three of THE PLAYERS Championship.
Mike Ehrmann/Getty Images

Chris Kirk (68) broke away from the pack with three late birdies to get to 10-under, but there are three players just one shot back and 16 within three of the lead after a wild Saturday full of birdies and big moves.

Kirk, who turned 30 on Friday, is coming off a two-win season and trying to win for the first time since the Deutsche Bank Championship last September. He birdied holes 15-17 and curled in a four-footer for par at 18.

Quirky Kevin Na, who went into Saturday tied for the lead with Jerry Kelly, hung around the lead for much of the afternoon despite bogeying the first hole and surviving a scare at the par-3 17th, where he thought his tee shot would come up short in the water and dropped his club. (The ball went beyond the pin and settled to within six feet for birdie. He missed the putt.)

But Na lost his tee shot right and double-bogeyed 18 to fall to 8-under.

Among those with an excellent chance to win Sunday are a handful of Players Championship rookies like Kisner, who rushed to the top of the leaderboard with a front-nine 31 before going even par the rest of the way for a 67. Craig Perks was the last first-timer to win the Players, in 2002.

“It’s crazy,” Kisner said of the bunched leaderboard. “At one point I saw there were like 45 guys within four shots of the lead.”

After overnight rain, and with the wind down, the course was there for the taking Saturday, and the best players in the game—48 of the top 50 in the world—took full advantage. Justin Thomas, a highly touted 22-year-old rookie, made a record 10 birdies in his round of 65 Saturday to get to 8 under par. Chesson Hadley and Jhonattan Vegas each shot 66, and Sergio Garcia and John Senden signed for 67s to get into contention.

Tiger Woods, who won here two years ago, started the day at even par and in need of a similar low round to get into contention, but he double-bogeyed both front-nine par 5s and had to rebound with a back-nine 35 just to card a 3-over 75. It was the first time in his career that he has doubled two par 5s in one round, and at 3 over par, he is too far back to contend Sunday as he continues his latest comeback under new swing coach Chris Como.

After hitting just 7 of 14 fairways and 13 greens in regulation, and taking 32 putts, Woods left the course without comment.

Defending FedEx Cup champion and Ponte Vedra resident Billy Horschel, paired with world No. 1 Rory McIlroy, made four front-nine birdies and shot 69 to get to 7-under par, just three shots off the lead.

McIlroy, meanwhile, struggled at the start of his round. His front-nine 37 included an embarrassing moment at the par-5 ninth hole, where he was just left of the green in two but opened up a wedge and slid completely under the ball with his third shot. Still, he salvaged par and stayed in contention thanks to a back-nine 33 to get to 6-under, just four back.

“Very frustrated on these greens and not seeing a lot of putts drop,” said McIlroy, who hit 13 of 14 fairways and 14 greens in regulation but took 32 putts. “So hopefully that will change a little, it can change tomorrow. But tee to green it’s right there. I just need to get a few to fall.”

Rickie Fowler chipped in for birdies at the fifth and 11th holes—the latter after breaking his club on a tree root earlier on the hole—en route to a third-round 71 to go into Sunday with an outside chance at 7 under.

Kirk, who turned 30 on Friday, birdied holes 15-17 and curled in a four-footer for par at 18. Coming off a two-win season, he is trying to win for the first time since the Deutsche Bank Championship last September. So far, he said, he has been underwhelmed with his 2015, in which he has just one top-10 finish, a T8 at the Valero Texas Open in late March.

Still, he took some positives from his solid performance at the WGC-Cadillac Match Play in San Francisco last week. Although he failed to make the knockout stage on the weekend, that doesn’t tell the whole story. Kirk brawled with Paul Casey only to lose in 22 holes, but bounced back to win his next two matches against Francesco Molinari and Adam Scott.

“I felt like I really took some momentum from that,” Kirk said.

This is the fourth time he has held at least a share of the 54-hole lead, and he has won twice in two of those instances—at the 2011 Sanderson Farms Championship and the 2014 McGladrey Classic.

Nothing, though, is quite as stressful as taking a final-round lead onto the watery Stadium Course at TPC Sawgrass. It could be a wild Sunday.