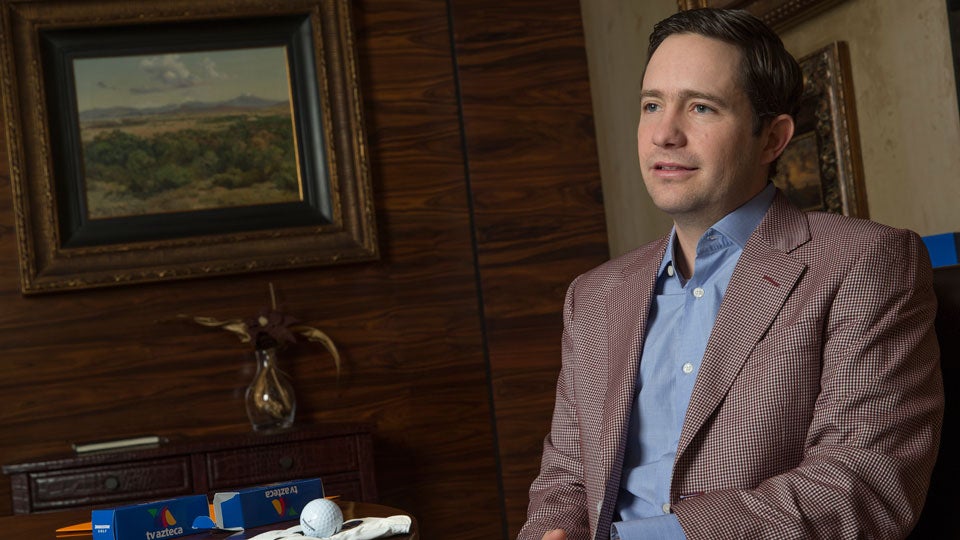 Benjamin Salinas Sada will serve as the chairman of the WGC-Mexico Championship.
Courtesy of TV Azteca

[This story first appeared on GOLF.com in December 2016.]

Benjamin Salinas Sada, CEO of TV Azteca, led the negotiations that will bring one of the PGA Tour’s prestigious World Golf Championships to Mexico City in 2017. The move was controversial: Donald Trump’s Doral had hosted professional golf for 54 years, but when the event’s sponsor Cadillac declined to renew its contract, the Tour struck a new deal with Grupo Salinas, the Mexican telecommunications conglomerate that owns TV Azteca. The irony was lost on no one. It was widely perceived as a rebuke to Trump, who called Mexican immigrants “rapists” at the outset of his presidential campaign, though Tour Commissioner Tim Finchem claimed the motivations were merely financial. Salinas, who plans to serve as the event’s chairman, spoke to GOLF.com about how the deal came together, what it means for golf in Mexico and whether Trump’s politics chased the event from Doral.

When did negotiations with the PGA Tour begin?

We’ve been in an ongoing conversation with the PGA Tour for about two years. We were looking for an event that could grow the sport of golf here in Mexico. There weren’t many tournaments available, but we explored a couple of them, the first one being the Dell Match Play Championship, because there was potential loss of a sponsorship there. When that didn’t work out, we waited and then the event at Doral became available because of a loss of a sponsorship, so we decided to take a chance and bring this wonderful event to Mexico City.

What were the main concerns, on both sides, during the negotiations?

My concerns were how to get the top 50 players in the world to actually come to Mexico. We had to do this road trip where we invited the top Tour executives over there to come to Mexico and show them what Mexico City is all about. We are a major city, one of the top cities in the world. We’ve had NFL games, NBA games, World Cup matches. They needed to come and see that. The Tour’s main concern, I guess, was security. We were happy to show them around, show them the concern the authorities have for the tournament. Mexico City is a very safe place, but the image of Mexico abroad is not good.

Is combatting that image a major motivator for hosting the tournament?

Definitely. There were two major driving forces: the first is growing the sport, the second is to change that perception and show the world what Mexico City is able to do. That goes beyond the golf tournament.

How much is the sponsorship worth and for how long will it last?

It’s a seven year contract, and it’s going to cost us around $25 million per year. That’s a ballpark number. We haven’t finished the budget yet. For us, it’s a long-term thing. We want this to stay here for 50 years, if possible, and to do that we have to have a great event, so people in Mexico have to get involved.

We dealt primarily with Monahan. It was him all the way, but of course we signed the deal with Finchem.

Why did you choose Club de Golf Chapultepec to host the tournament?

Tour officials managed to visit all potential golf courses for the event. One of the main concerns we had was space. Here in Mexico, everything is crowded. We needed a big place to have television crews and big entrances for fans that was close to downtown where players will be staying. In terms of logistics, that was our No. 1 concern. And Chapultepec is a very challenging golf course that has already seen big tournaments.

What do you have planned for the event so far?

This is going to be a total experience. It will be a social event, a cultural event, a gastronomical event. Part of downtown will be closed for pedestrians only, so we’ll be working with the hotels and restaurants on major events after the golf tournament. We want all of our visitors to experience Mexico City in 360 degrees.

Why does sponsoring a golf tournament make sense for Grupo Salinas?

This is not a business decision. We are very passionate about the game. We want to grow the sport here in Mexico and get kids, especially those who come from poorer origins without access to the game, involved and take golf to them. What we want to do is grow the sport through these heroes. The heroes are coming down to Mexico City, so we want to the kids to get involved and get to know them and try out the sport.

How do you plan to do that?

Golf is not a very popular sport here in Mexico. That’s one of our challenges here. We had two Mexican players on Tour last year but they both lost their cards. So wanted to step up and bring the best players in the world here, and create the potential for Mexicans and Latin Americans to play one day. There’s going be a spot reserved in the WGC here for one player from Mexico, so the highest-ranking Mexican player at the time will play against the best in the world. We want to build a bridge from Latin America to the PGA Tour to help our new skilled players make the jump to being competitive players. We want to start building it little by little.

Is it your hope that by growing the game in Mexico you’ll build another sport to broadcast to fans through TV Azteca?

We definitely own the TV rights, so we are exploring the idea of broadcasting it, but because there’s no real fan base here in Mexico, we’re going to do a soft thing, maybe do coverage of one hole. ESPN will handle the local broadcast of the whole live event. This is an introduction for golf to Mexicans, so hopefully in the future there will be a fan base so we can broadcast live golf. Was it a condition that you choose the course and move the event to Mexico? Did you consider sponsoring the event at Doral?

Moving it to Mexico was definitely a condition. We want Mexicans to live this sport and to see what it’s all about, so that we can build a new base of golfers.

The Tour insists that this decision was financial, not political. Is that true? How much of a factor was Trump’s anti-immigrant rhetoric in the negotiations?

It wasn’t a factor, because we were talking to the Tour before Trump’s campaign began. When we first talked about acquiring this tournament, I don’t think he was even a candidate yet, so that wasn’t a major concern for us, and it wasn’t a motivation at all. This was not a political thing. This was the one event that was possible to bring to Mexico City.

After the deal was done, Trump voiced his displeasure with the Tour, saying, “I hope they have kidnapping insurance.” What’s your response to that?

I think that’s very unfortunate. I don’t think that’s accurate at all. Of course he was on the campaign trail at that moment, but Mexico City is a great place and a very welcoming city. There’s a lot of tourism here. The players are going to be extremely happy. We’re aiming to have the No. 1 tournament experience in the world.

Are you anticipating any ongoing controversy now that Trump has been elected president?

We’re not expecting any complications regarding the event. I think it’s going to go off wonderfully. And we’re welcoming everyone. We’d even welcome Mr. Trump to join us. I think he’d have a good time here.