Nothing represents success in golf quite like the Masters champion’s green jacket. Images of the select few players who have slipped on that jacket are etched in our memories. The jacket really has no equivalent. You might even call it priceless.

A federal lawsuit filed in the U.S. District Court for the Southern District of Georgia on Monday goes a step further to argue that the jacket is, in fact, priceless.

According to Augusta National Inc. (ANI)—a Georgia corporation that owns and operates the August National Golf Club and the Masters Tournament—the green jacket can’t be sold by anyone other than ANI. To that end, ANI charges that a Florida-based sports memorabilia company called Green Jacket Auctions is breaking the law by holding onto one particular green jacket, along with other Augusta National items.

The parties will have a hearing before Chief Judge Randal Hall on Aug. 17. Unless Judge Hall grants a temporary restraining order, these items will be auctioned off on Aug. 19.

Important difference between owning and possessing a green jacket

ANI stresses that it owns each Masters champion jacket at all times and that the winner’s rights in such a jacket are possessory. Think of the Masters champion as an entrusted party. In some ways it is like NHL players on a team that wins the Stanley Cup. Over the following summer, the players are typically allowed to take the Stanley Cup on the road for a brief trip. But at no point does any one player “own” the trophy.

ANI highlights the extent to which it enforces its ownership claim over the jacket. In the complaint, ANI retells Gary Player’s experience after winning the 1961 Masters. Player brought the tournament jacket home to South Africa and then failed to return it. ANI told Player that while he could “store” the jacket in South Africa, he could never again wear it in public.

As mentioned, ANI also contends that Green Jacket Auctions has unlawfully obtained club member jackets. These member jackets, the complaint insists, can “never” be removed from Augusta National, for any reason. Even worn and torn jackets must remain at the club. Damaged jackets are replaced with new ones, but damaged ones can’t exit the property.

That is the tradition. Those are the rules.

ANI demands that the court enjoin Green Jacket Auctions from selling these “stolen” items and order their return. ANI stresses that under Georgia law, the “true owner of personal property” must return stolen property—even if the defendant had no knowledge the property had been stolen. 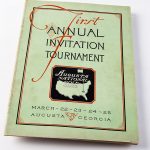 ANI also insists that Green Jacket Auctions has damaged the club’s brand through misleading statements contained in the defendant’s advertisements.

In response, ANI contends Green Jacket Auctions statements are “false” and “intended to falsely and improperly bolster Defendant’s reputation by implying that it has an ability to review private, internal records of ANI and to obtain items which ANI cannot.”

ANI further charges that Green Jacket Auctions is selling a counterfeit “Augusta National Golf Club Sterling Silver and 14k Gold Belt Buckle.” ANI stresses that the item creates an impression of a false association between ANI and a fake belt. This impression dilutes the value of ANI’s trademarks, which are designed to distinguish ANI’s actual goods from impostors and counterfeits. 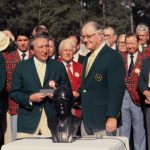 You may also like Byron Nelson’s green jacket is for sale, but you’ll have to pony up some serious cash

The battle ahead over ownership

So where will the lawsuit lead?

The law normally compels persons in possession of stolen goods to return them to their rightful owner. However, when a good has been out of possession for a long time and its true owner failed to make reasonable efforts to find it, the good might not be ordered returned.

Whether these points prove relevant here remains to be seen. But consider Nelson’s jacket from 1966. According to ANI, the jacket was stored at ANI as of 2009. ANI insists that it retains title in the jacket and Green Jacket Auctions must therefore return it.

Green Jacket Auctions might also inquire as to whether ANI notified the police about missing items. If the answer is no, Green Jacket Auctions will demand to know why. The auction house might also claim that ANI is simply trying to scare off potential buyers with the auction approaching. Those buyers might now believe there is clouded ownership over the items and thus offer less in an auction bid.

It’s unclear how Green Jacket Auctions came about the items set for auction. If purchased from a reputable dealer, Green Jacket Auctions would have a stronger argument that it acted in good faith. But buying stolen goods in “good faith” doesn’t ensure that the goods won’t be ordered returned to their true owner.

Green Jacket Auctions’ business model appears designed to take on ANI’s traditions and make coveted golf items available to consumers. It will be interesting to see how Judge Hall connects that business model with the law.

Michael McCann is Sports Illustrated and GOLF’s legal analyst and the associate dean for academic affairs at the University of New Hampshire School of Law.