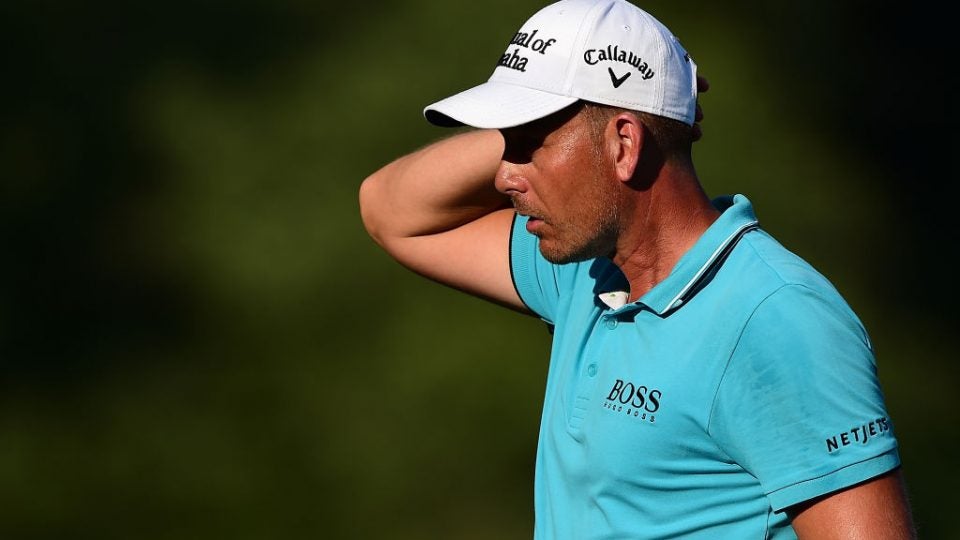 during the third round of the Wyndham Championship at Sedgefield Country Club on August 19, 2017 in Greensboro, North Carolina.

GREENSBORO, N.C. (AP) — Henrik Stenson shot a 4-under 66 on Saturday to take a one-stroke lead in the Wyndham Championship.

The 2013 FedEx Cup champion and 2016 British Open winner was at 16-under 194 at Sedgefield with a round left in the PGA Tour’s last regular-season event of the season.

Webb Simpson, Kevin Na and Ollie Schniederjans were tied for second. Na shot a 65, Schniederjans had a 66 and Simpson – a North Carolina native who won at Sedgefield in 2011 – had a 68.

Simpson had sole possession of the lead late in the round, before Stenson caught him during his birdie binge on the back nine.

The Swede pulled even with Simpson with birdies on four of five holes, a run he capped by sticking his second shot on the par-4 17th some 10 feet from the hole and converting that putt. He could have ended his round with another one, but pulled his 15-foot birdie putt wide right and settled for par.

Still, his 72-hole score is second-best in tournament play at Sedgefield, surpassed only by Carl Pettersson’s 191 in 2008.

Simpson – a local favorite who grew up in Raleigh, played in college at nearby Wake Forest and named his third child Wyndham after that victory here – shared the 54-hole lead with Ryan Armour at 13 under.

Simpson birdied his first hole, then reeled off 11 consecutive pars before briefly taking sole possession of the lead with birdies on the 13th and 15th holes. He sank a 20-foot birdie putt on No. 13 and two holes later, he settled for birdie after missing a 35-foot eagle putt on No. 15.

Simpson could have caught Stenson on the 18th, but he pulled a 15-foot birdie putt left.

Schniederjans – a 24-year-old, third-year pro from Georgia Tech – is chasing his first victory on tour and his fifth top-10 finish of the year.

After shooting a 63 on Friday and starting his round two strokes off the lead, he became the first to 16 under with his birdie on the par-5 15th, hitting his second shot into the primary rough but recovering by chipping to 10 feet and converting the putt.

Then came trouble on the next hole. His tee shot on the par-3 16th landed in a low greenside bunker, and he stuck his chip into the rough just above the sand on his way to a bogey that dropped him back a stroke.