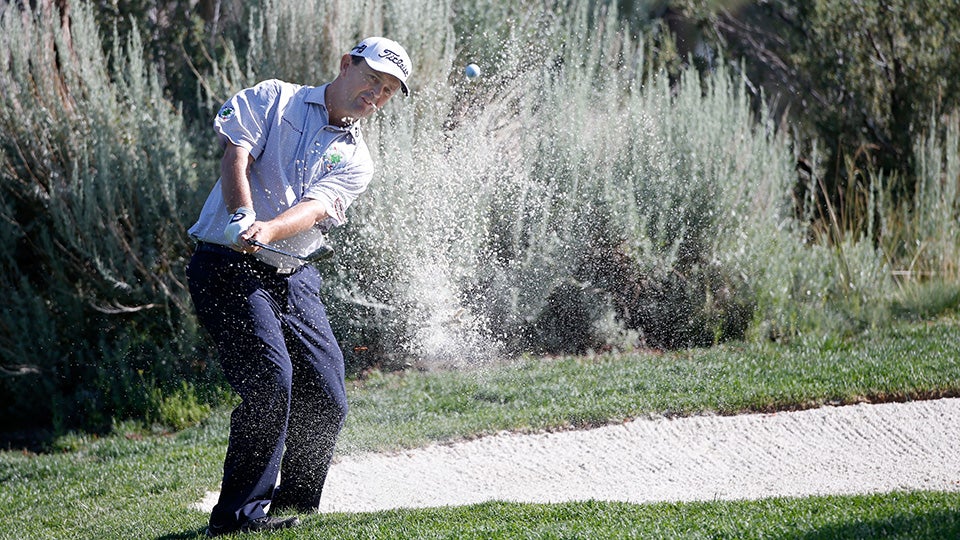 Greg Chalmers bogeyed 18 to drop one shot off the lead.
Sam Greenwood/Getty Images

RENO, Nev. (AP) Greg Chalmers is trying to leave his rivals behind in the Barracuda Championship – and not get too far ahead of himself.

”It’s a necessity at this level if you want to be successful,” said Chalmers, the 42-year-old Australian who leads active PGA Tour players in starts without a victory at 385.

The left-hander birdied five of the final six holes Saturday at Montreux to increase his lead to six points over Ben Martin and Gary Woodland in the modified Stableford scoring event.

”There’s a long way to go, and there’s plenty of players capable of shooting a lot of points out here,” Chalmers said. ”This golf course can give you a lot of points, if you drive it well, get it into play, start making a few putts. I’ll get out there tomorrow and get that first tee shot in play and get after it.”

The scoring system awards aggressive play. In conventional scoring, Chalmers was 16 under with rounds of 67, 68 and 65. Martin was 15 under, and Woodland 13 under.

Chalmers has only conditional tour status. He has made six starts this season on the PGA Tour, tying for 58th in the first in China in November and missing the cut in the rest, and also has played nine Web.com Tour events.

Martin had eight birdies in a 16-point round, the best score of the week.

”The course dries out in the afternoon, the wind picks up, it plays a little tougher,” said Martin, the winner last season in Las Vegas for his first tour title. ”I was really happy. I was bogey-free. Eight birdies today. I’ve been trending in the right direction.”

Woodland had an 11-point round. The 2013 champion birdied all four par-5 holes.

Chalmers, Martin and most of the players are fighting for a spot in the British Open in two weeks at Royal Troon in Scotland. Because of the West Virginia floods that led to The Greenbrier Classic being canceled next week, a spot was transferred to the leading player not already eligible at Montreux. Woodland was the only player in the top 23 who has already qualified for the Open.

”That would be awesome,” Martin said. ”I put myself in position to get there tomorrow. And this tournament will get me in the Open, the PGA, Maui, so there’s a ton of upsides to play well tomorrow.”

Scotland’s Martin Laird was fourth with 28 points after a six-point round. Steve Wheatcroft scored nine points to reach 27, and Will MacKenzie was another point back after an eight-point round.

Wes Roach topped the group at 25 after a 13-point round. He had seven birdies and closed with a bogey on the par-5 18th

”I played well. Hit the ball great,” Roach said. ”Obviously, not what the finish that I was looking for. But that doesn’t take away from the positives of the day. Hit the ball well, gave myself a lot of good chances, made seven birdies.”

Kelly Kraft had a 15-point round to reach 22. He had eight birdies and a closing bogey.

”I actually hit it the same I did as the first two days, buy finally made some putts,” Kraft said. ”I worked hard, putted yesterday for about two hours after my round and found a little something and just started kind of rolling in some 10-, 15-footers early and got it rolling.”